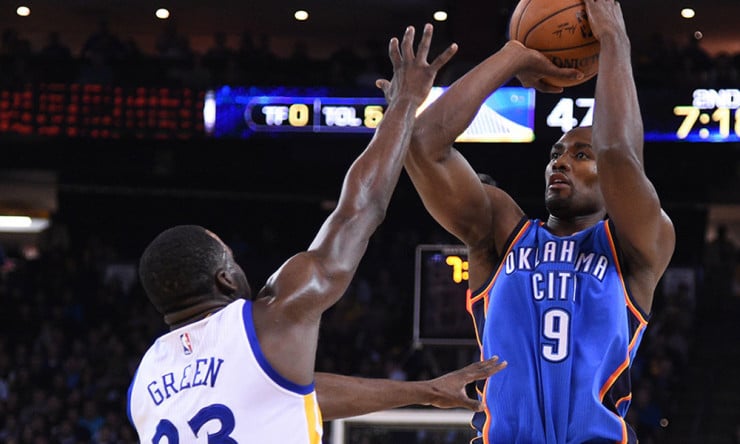 James Harden as Most Valuable Player

Daryl Morey, ever the gambler, seemingly went from hitting the jackpot to rolling a set of snake-eyes in the NBA’s modern talent arms race.

With LeBron James having announced his intentions to return to the Cleveland Cavaliers to attempt to lead the franchise to their first NBA championship, free agent Chris Bosh, it was believed, was available for the taking.

Not believing they had a serious chance of landing Carmelo Anthony, the Houston Rockets general manager swooped in and, for the second time in four years, attempted to sign Bosh. The addition of Bosh on would have been the necessary precursor to the Rockets matching the three-year, $45 million offer that the Dallas Mavericks extended to restricted free agent Chandler Parsons, so when the Miami HEAT stepped up their offer to Bosh and he re-signed, Morey seemingly went from being on the precipice to finishing building out the core of his championship roster to seemingly having less pieces than he began the summer with.

In December, Basketball Insiders looked at the best- and worst-case cap scenariosfor the 2015-16 season, but much has changed through February’s NBA trade deadline.

Players have been dealt, waived, claimed, stretched and signed.  Meanwhile, the NBA’s salary cap is projected to climb to roughly $67.4 million for next year.

Wizards Turning Things Around After Slump

The Washington Wizards didn’t look like themselves in February.

After emerging as one of the top teams in the Eastern Conference earlier in the season (and recording wins over teams like the Cleveland Cavaliers, Los Angeles Clippers, Houston Rockets, and San Antonio Spurs), Washington fell into a terrible slump that lasted from late January to early March.

Who Gets The East’s Final Two Playoff Spots?

With the end of the regular season fast approaching, the race for the final two playoff spots in the Eastern Conference is really heating up. We have a pretty good idea of which teams will get the top six seeds, although the Milwaukee Bucks and Washington Wizards haven’t been spectacular as of late. However, the seventh and eighth seeds are still firmly up for grabs. There are a number of teams in the running, barely separated in the standings. Now, let’s take a closer look at which of those teams has the best chance of extending their season.

The shapes and angles take life when Hollis Thompson views the court. Instead of a ball and a hoop he sees basketball with an analytical eye, one that allows him to view the game from a mathematical perspective.

“I’ve always been kind of a numbers guy,” he told Basketball Insiders. “I’m good with numbers, sometimes fascinated by them. I just like numbers, I kind of turn everything into a numbers game.”

Growing up, Thompson was a straight-A student with a 4.2 GPA at Loyola High School of Los Angeles. Math and science classes captured his attention.

If the Cleveland Cavaliers’ 2014-15 season seems familiar, it’s because LeBron James been through a season like this before.

It’s James’ first year back with the Cavaliers since his decision to leave for the Miami HEAT in 2010, and it’s gone similar to his first campaign in Miami.

James signing with the HEAT was one of the biggest free agency moves in recent years and completely changed the landscape of the NBA. Chris Bosh also signed with Miami and Dwyane Wade re-signed with team, forming one of the most talented trios the league had seen in quite some time.

Veterans Who May Retire This Summer

Veteran-laden teams typically have the most success in the NBA, but make no mistake the league is and will always be a young man’s game. Aging, injury, money in the bank, growing families and the lack of desire to train at a high level all tilt the scales toward the younger guys making up the majority group.

However, the undefeated champion of them all, Father Time, is the leading reason why once dominant athletes end up hobbling down the stretch before hanging up the high tops for good.

This offseason will be no different. Undoubtedly there will be more than a few veterans, armed with stellar resumes, who decide to walk away from the game for good.

Who Gets The West’s Final Two Playoff Spots?

It seems like each season the Western Conference is disproportionately loaded with talented teams, resulting in at least one playoff-caliber team being squeezed out of the postseason. This season is no exception, with 10 Western Conference teams with records above .500 and another quickly shooting up the rankings post All-Star break.

An underrated aspect of the Golden State Warriors’ dominance this season has been their health – long their Achilles’ heel.  Andrew Bogut missed last year’s playoff loss to the Los Angeles Clippers, while ankle injuries to Bogut and Stephen Curry derailed the Warriors’ upset bid against the San Antonio Spurs in 2013.  This year, however, the only key rotation player to miss major time has been Bogut for a 12-game stretch in December and January.  That will change as Klay Thompson is projected to miss 7-10 days (“maybe more, maybe less,” according to coach Steve Kerr) with this ankle injury suffered against the Los Angeles Lakers on Monday night.

The Season’s Most Devastating Injuries

Reader beware: the following might be the most depressing thing anybody on Basketball Insiders writes this month, but it’s something worth reading to help put into context just how much injuries have completely changed the outlook of the 2014-15 NBA season. All it takes is a cursory perusal of the following list to get a sense of how impactful long-term injuries have been on so many teams this season. Nobody likes to see the league’s biggest stars get hurt, but there sure has been a lot of it going around this season anyway.

Players like Paul George and Joel Embiid aren’t even mentioned here because they were injured before the season even started. Everybody here was hurt once actual regular season games got underway, so it’s not like teams even had much opportunity to try and replace injured players’ production through free agency or the draft.

Even without those guys, the list is a gloomy one. Here’s a look at this year’s most devastating injuries: