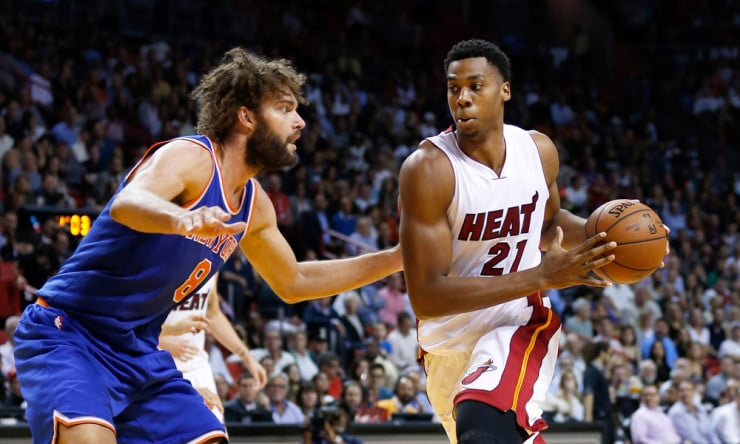 Dwane Casey’s Will to Fight

The Toronto Raptors will enter play on March 20 having compiled a 47-21 record. Trailing the Cleveland Cavaliers by just 1.5 games in the standings, the Raptors are all but guaranteed to surpass last season’s win total of 49 games (which was a franchise record).

Slowly but surely, under the leadership of Dwane Casey and behind the decision making of Masai Ujiri, the Raptors have become one of the best teams in the Eastern Conference.

For months, it has been a foregone conclusion that the Cavaliers and LeBron James would simply waltz to their second consecutive Eastern Conference championship and make the NBA Finals.

Casey—perhaps one of the more underrated coaches in the entire league—clearly has other ideas.

Hassan Whiteside’s ascent to stardom is one of the best modern stories in all of professional sports. It’s an underdog tale that probably would have trouble being adapted to a movie because it seems too good to be true and, quite frankly, would probably seem unrealistic to non-sports fans.

Whiteside entered the NBA with a ton of potential after just one collegiate season at Marshall. He was a raw player, but it was clear he had talent and a ton of upside. After all, as a freshman, he averaged 13.1 points, 8.9 rebounds and 5.4 blocks in just 26.1 minutes per game. Because of his inexperience and, some say, his ego, he slipped to the 33rd pick in the 2010 NBA Draft.

What’s Next For Dwight Howard?

The Houston Rockets are currently 35-35 on the season with 12 more games to play. If the standings hold true, the Rockets should end up in the postseason and what was supposed to be a title contending season will at least end in another playoff run.

There is no questioning that the Rockets have regressed this year from last year, and while there have been moments when they’ve looked very good, it’s clear that this core in Houston has probably run its course.

The Rockets have kept no secret of their desire to be flexible this offseason – with dreams of landing a major star like Oklahoma City’s Kevin Durant or even Memphis’ Mike Conley.

NBA Commissioner Adam Silver visited Staples Center on Tuesday night to announce that the 2018 All-Star Game will be held in Los Angeles.

He also took some time to talk about the one-and-done rule, labor relations, the NBA draft lottery and “Stickum.”

Since taking over as Commissioner, Silver has made it clear that he wants to raise the age requirement to 20 years old (rather than the current one-and-done college rule). However, he knows that will be tough to do with the National Basketball Players Association pushing back.

When it comes to aging future Hall of Famers, there is a silent recognition that the end of the road rarely ends in a fairy-tale fashion. Currently, there are two extremes of this scenario to reference in the cases of San Antonio Spurs center Tim Duncan and Los Angeles Lakers guard Kobe Bryant.

Duncan is strongly positioned to make another run at a title this season, while Bryant has battled injuries in recent years and will finish his legendary career on a team currently ranked last in the Western Conference.

Those are the extremes. But in the middle of these two extremes is another future Hall of Famer battling the age old fight with Father Time.

Utah’s Shelvin Mack doesn’t quite qualify by the strictest scientific definition. Certain elements of his game since arriving in Salt Lake City at the deadline have unquestionably changed or improved, and his role has expanded rapidly. His basic numbers reflect as much, showcasing the degree to which he’s seized the ample opportunity afforded him.

But despite his personal progress, viewing Mack as a true scientific catalyst for this Jazz team might be the best, and maybe only, relevant way of parsing out his impact.

The Villanova Wildcats absolutely trounced Miami on Thursday night, 92-69, sending them to the Elite 8 for the first time since 2009. Incidentally, that also was the last time Villanova made the Final Four.

That 2009 appearance was the university’s first appearance in the tournament semifinals since 1985, and New Orleans Pelicans forward Dante Cunningham was arguably the team’s best player in leading them to that point.

“It was amazing,” Cunningham told Basketball Insiders. “We go back to the university all the time and we get so much love for being that Final Four team.”

Pacers Jelling, Getting Healthy At the Right Time

Sitting in the seventh spot in the Eastern Conference, the Indiana Pacers are in an interesting situation. At 38-33 and with 11 games left on the schedule, there is a wide range of outcomes left on the table for the Pacers. Conceivably, they could fall out of the playoff picture, getting leapfrogged by the Chicago Bulls (two games back of Indiana) and the Detroit Pistons (half a game back of Indiana). But that’s the worst-case scenario for Indiana. They want to catch the pack ahead of them, including the Charlotte Hornets and Miami HEAT (three games up on Indiana) with the Atlanta Hawks and Boston Celtics a half-game ahead of those squads.

The Pacers are aware of where they stand.

Plenty of Blame to go Around in Chicago

With 11 regular season games remaining in the regular season, the Chicago Bulls are 36-35, and two games back of the eighth seed Detroit Pistons. While the Bulls had some skeptics entering this season, few people, if any, would have predicted that they would be at risk of missing the playoffs with 11 games left in the regular season. After losing back-to-back games to the 30-43 New York Knicks, some of Chicago’s players vented their frustration.

“Hell yeah, I’m embarrassed,” Gibson said after losing to the Knicks on Thursday night. “I take pride in wearing this jersey. I love wearing the Bulls jersey. Especially what we’ve been through, I take pride in playing for Chicago. When I wear that jersey, I try to go out there and play my heart out. And it’s frustrating when we come up short, and we look at ourselves, we’re losing to … I don’t want to criticize any[body], [but] trash teams. Everybody’s in the NBA for a reason, but we’re playing against teams that are not playing for anything, and we’re just laying down. It feels like now we’re a target. It feels like teams are not taking us serious.”