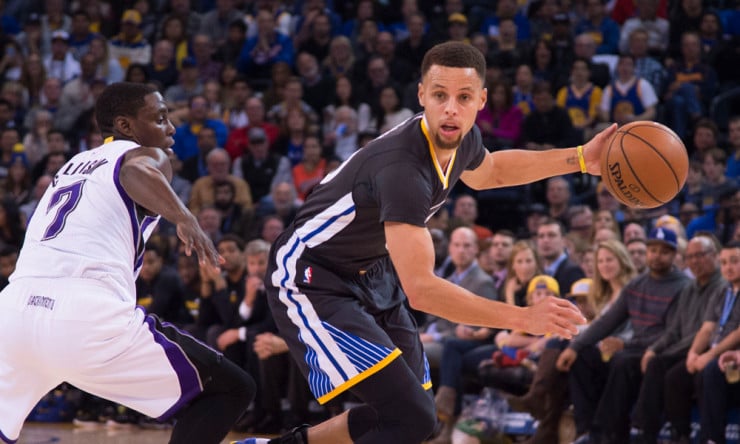 In case you spent your weekend hiding under a rock, you missed the Warriors pull off an improbable 121-118 overtime win over the Oklahoma City Thunder on Saturday night. And although we don’t typically get wrapped up in a single game, the Warriors pulling off what was such an improbable win in Oklahoma City epitomizes the spirit and resolve of the team that could crack 73 wins.

Knowing how much he’s moved around this month, it’s probably a good thing that he’s chuckling because the whole process was understandably pretty confusing for him.

Is Kyrie Irving Unhappy in Cleveland?

Rumors of Kyrie Irving wanting to leave the Cleveland Cavaliers were quite prevalent several years ago, although the rumblings disappeared for the most part in 2014. That’s when the Cavaliers managed to sign LeBron James and trade for Kevin Love, while also inking Irving to a five-year extension worth $90 million.

The ‘Irving-wants-out’ narrative vanished once it was clear that Cleveland was a legitimate championship contender and Irving was one of the squad’s most important players.

And just in case the lucrative extension and star-studded roster weren’t enough, the Cavaliers also parted ways with Dion Waiters, who butted heads with Irving and reportedly even had a physical confrontation with him. The Cavs’ brass was determined to get rid of any behind-the-scenes drama surrounding the team, which is also one reason why David Blatt was replaced at head coach by Ty Lue.

The Truth About Rookie Defense

As the NBA swings to the back part of the season and teams race to the finish line and the postseason in some cases, more and more focus will shift toward predicting the end-of-season awards. One of the more interesting races to watch will be the NBA’s Rookie of the Year award. Minnesota Timberwolves big man Karl-Anthony Towns is the frontrunner, as he’s having an impressive and consistent rookie campaign that couldn’t have been scripted any better. Then, there is New York Knicks sensation Kristaps Porzingis, who has exceeded everyone’s pre-draft expectations. Looming in the third chair is likely Philadelphia 76ers center Jahlil Okafor.

No name in the rookie class is more polarizing these days than Okafor, whether it’s his over-hyped and overblown off-court antics, the perception that he’s the NBA’s worst defender or just a general dislike of a throwback big man who thrives in the low-post.

On the Fortune and Future of the Grizzlies

The raw win-loss standings at a given point in an NBA season are quite often an incomplete cumulative representation of team quality. They don’t take schedule or health into account, or a skewed home-away distribution. They offer limited data points by which to judge a team; one focus of a movement many refer to as “analytics” is using some relatively simple arithmetic to widen the available data points, producing a more accurate and predictive way of evaluating teams and players.

By a few of the simplest such metrics available, the 2015-16 Memphis Grizzlies are among the “luckiest” teams of all-time. That term can be thrown around loosely, so a more firm definition here: The gap between what simple contextual metrics project a team like Memphis’ record to be and what their record actually is checks in as one of the largest positive gaps in recent observable league history.

Time to Panic in Chicago?

The thought of the Chicago Bulls being out of the playoff picture in March seemed very unlikely at the start of the season.

After all, this is a team filled with plenty of experienced veterans who have had their fair share of success in the league. The franchise is used to winning. They’ve made the playoffs in 11 out of the last 12 seasons and seemed poised for an eighth-straight trip to the postseason.

However, the last month of basketball for the Bulls has thrown a wrench into any postseason plans they might have had. The Bulls sat in third place in the Eastern Conference on January 28 at 26-19, but have gone just 4-11 since then and have now lost four games in a row.

We knew that some deserving star players would be snubbed from this year’s NBA All-Star game. It happens every year and is unfortunate for those deserving players that are excluded. There was perhaps no bigger All-Star snub this season than Portland Trail Blazers point guard Damian Lillard.

In a league that is littered with star-caliber point guards, Lillard is considered to be one of the best. But that hasn’t kept Lillard from running into his share of snubs, like his exclusion from this year’s Western Conference All-Star team and being cut from the 2014 USA FIBA World Cup Team, in favor of players like Kyrie Irving and Derrick Rose. Lillard has never been shy about voicing his displeasure when being snubbed, and now it seems that he is letting his play do all the talking for him.

Should Durant Become a Free Agent Again in 2017?

The 2016 NBA free agent class is a relatively weak crop, featuring few true superstars – especially when compared to the incredible class of 2017. However, there is an incredibly appealing grand prize. The cream of the free agent crop is Kevin Durant. It is rare that such an incredible talent will be up for grabs in the middle of his prime (Durant doesn’t turn 28 until September). There was some trepidation coming into this season after KD missed 55 games in 2014-15 as a result of multiple foot surgeries; however, Durant has quieted those concerns this year. He’s started 54 games this season and the foot hasn’t been an issue. Just as importantly, he’s reestablished himself as a dominant offensive force. Durant is on pace to become the first player in over 20 years to average at least 28 points, eight rebounds and 4.5 assists per game. Per BasketballReference.com, only nine players in the NBA history are part of this exclusive club (Kareem Abdul-Jabbar, Elgin Baylor, Larry Bird, Wilt Chamberlain, John Havlicek, Michael Jordan, Bob McAdoo, Oscar Robertson and David Robinson).

The current iteration of the Houston Rockets (30-31) are a far cry from last year’s version that won 56 games and rollicked into the Western Conference Finals. This year’s unit has been marred by inconsistency, injuries, a coaching change and failed experiments.

Heading down the stretch, the Rockets are clinging to the last and final playoff spot in the West. With title aspirations seemingly a pipe dream at the moment, the Rockets are gearing up to fend off Sacramento and Utah to remain in the playoff mix.

One of the major areas impacting the team’s success is power forward play. Forward Terrence Jones has suffered through a season plagued by injuries and illness. The team acquired veteran Josh Smith earlier in the campaign, but his performance has been erratic at times. Looking to strengthen the position, Houston recently signed former lottery pick Michael Beasley for the remainder of the season.