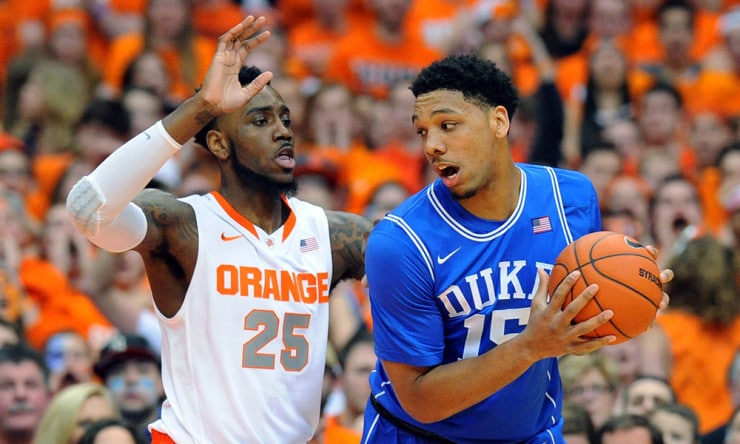 With the draft ties broken and the landscape of traded picks somewhat resolved, and the fact that I have not done a Mock draft since February, it seemed like it was time to put out my latest view of the Draft landscape.

Basketball Insiders will start dropping our weekly Consensus Mock Drafts on May 1st, and then we’ll update each Wednesday up to the 2015 NBA Draft.

So without further ado, here is my latest look at the 60 picks of the 2015 Draft.

In the choppy waters of trades and bumpy waves of rebuilding, Brandon Bass helped keep the Boston Celtics afloat this season. He has shown the same commitment to children of the greater Boston area, literally, by teaching them how to swim.

For nearly 20 years Bass was terrified of being in the water. The drowning death of a young child he knew growing up in Baton Rouge, Louisiana had lingered on his mind any time he was near a pool or lake.

From the D-League to the NBA Playoffs in a Month

It was less than four weeks ago that point guard Tim Frazier was battling his way through the NBA D-League attempting to earn another call up to the NBA. Now, Frazier is coming off of making his playoff debut with the Portland Trail Blazers following Sunday night’s 100-86 defeat to the Memphis Grizzlies in Game 1.

Frazier finished that game by playing just three minutes and missing one field goal attempt well after the game was already decided. While it may seem like an achievement to appear in an NBA playoff game on a team that won 51 games in the regular season, Frazier will be the first to put his achievements aside for the betterment of the team in whatever capacity that may be.

Greenberg was the general manager of the Philadelphia 76ers when the team drafted scoring sensation Allen Iverson with the No. 1 overall pick in the 1996 draft, and he also had stints as a head coach at Radford University and NBA assistant coach for the New York Knicks and the Los Angeles Clippers.

Now, he has morphed into an overseas basketball magician.

Last week, the NBA broke four ties to help establish the order for the 2015 NBA Draft.

The Indiana Pacers, Dallas Mavericks, Memphis Grizzlies and Houston Rockets proved victorious, although the Houston win benefits the Los Angeles Lakers, who will get the Rockets’ 27th pick as part of last summer’s Jeremy Lin trade.

Teams often use future draft picks as currency, in an increasingly complex web of obligations.  Six of the 30 first-round picks in June’s draft, along with two second-rounders, are still unresolved.

Should Centers Still Be a Top Priority on Draft Day?

Since the NBA’s inception way back in the 1950s, there has been a draft-day bias among NBA general managers: All things considered equal, GMs have often favored taller players.

The rationale is reasonable. There are far fewer seven-footers among us, thus the supply-and-demand factor is taken into the consideration. Just as importantly, for most of the league’s history, talented centers have often been an important centerpiece for championship teams, and dynasties. Having a top-tier center was all but essential for sustained success. The league’s most important and most celebrated players were often big men who dominated the paint. This was especially true during the NBA’s formative years.

The Boston Celtics Are On The Rise

The Boston Celtics are on the brink of elimination from the playoffs, down 0-3 in their first-round matchup versus the Cleveland Cavaliers. The Celtics are clearly outgunned versus the Cavaliers, a legitimate title contender, and don’t have the firepower to successfully turn the tide.

Following the Game 3 loss at home, there were plenty of dejected faces on Boston’s bench. The players, in the heat of the moment, are frustrated with losing as competitors. But taking a step back from the court, the organization as a whole and the club’s fan base should be brimming with excitement about what the future holds.

The Celtics are in still in the process of a massive rebuilding project. The team entered the 2014-15 campaign with no expectations of making a playoff appearance, let alone thoughts of reaching the second round. The feelings of frustration the players on the court feel are real, being so close to a victory if the ball took a few bounces the other direction. That’s easy to see.

Rest is More Than a Regular Season Consideration

The theme of planned, non-injury-related rest for aging or star players during the regular season has become somewhat prevalent in recent years. San Antonio’s Gregg Popovich (surprise, surprise) likely instigated the trend, one that started to gain real public traction over the last few seasons when several Spurs stars would suddenly show up as rest-related inactives for high-profile national games. It has yet to fully trickle into every team’s formula, but it’s certainly become more common to see coaches and front officers err on the side of caution and even allocate significant time off to guys who, by the traditional definition, aren’t “hurt.”

As it should, the arithmetic here changes come playoff time. Individual games that might have very little relevance in the regular season are nowhere to be found. Rotations tighten, with weak spots often eschewed completely due to the exploitative nature of the postseason; as a result, elite guys naturally spend more time on the floor. General effort level is increased across the board as well, with each given minute perhaps taking a slightly larger toll than the same 60 seconds in a mid-January game.

Thanks to the San Antonio Spurs’ road win against the Los Angeles Clippers on Thursday, there still has never been an occurrence in NBA history where every first-round playoff series started off with one team boasting a 2-0 lead. Still, it was close enough to happening that everyone can agree that these have been some of the least dramatic playoffs in recent memory.

In any event, there are seven teams that at some point in these playoffs have had to game plan for winning four out of five games against some of the best and most talented rosters in the NBA. That’s a tall task for good teams like Portland and Toronto, but even taller for burgeoning squads like Milwaukee and Boston.

It’s no secret that Kawhi Leonard of the San Antonio Spurs is one of the top young talents in the NBA. He won last season’s Final’s MVP award and was named this season’s Defensive Player of the Year on Thursday. Many people acknowledge that as players like Tim Duncan, Tony Parker and Manu Ginobili come closer to retiring, Leonard is the star player who will take over the team and guide it into the next era.

However, as good as Leonard already is, for many people there has always been a lingering doubt about whether he could ever be a true superstar. He is a hard worker, quiet and humble, which arguably makes him the perfect successor to Duncan. But in this day and age, the NBA is seemingly run by a plethora of talented, high usage point guards like Chris Paul, John Wall and Stephen Curry, just to name a few. And beyond point guards, the league is full of high usage, versatile small forwards who can play as a quasi-point guards, be a knock down shooter, a strong perimeter defender and a team’s best overall player, including LeBron James, Kevin Durant, Paul George and Carmelo Anthony (though the latter has never been a great defender). Leonard has shown great improvements in his all around game over his short career, but he doesn’t quite fit the mold of the players mentioned above.

We warned about the chances of the Spurs coming out and firing on all cylinders when returning home if the Los Angeles Clippers were not careful in Game 3, and unfortunately for the Clippers, that is precisely what took place. Beyond the Spurs continuing to build their momentum as the first team to win consecutive games in the series, the Clippers never appeared to even look competitive in their first trip to AT&T Center this postseason.

As mentioned, they were very good on the road throughout the regular season and were even able to win one of the rare games the Spurs surrendered at home this year, but this team isn’t going to win too many playoff games when Chris Paul, Blake Griffin and J.J. Redick combine to go 11-33 from the field. Not to mention, as has been the case throughout the entire season, in the event Jamal Crawford’s shot isn’t on, the Clippers simply don’t have anyone else outside of the starting unit they can truly rely upon to consistently contribute. Austin Rivers was able to provide 11 points in relief, but the game was completely out-of-hand when he did much of his damage and it clearly wasn’t nearly enough to offset an off night from Crawford (1-11 from the field).