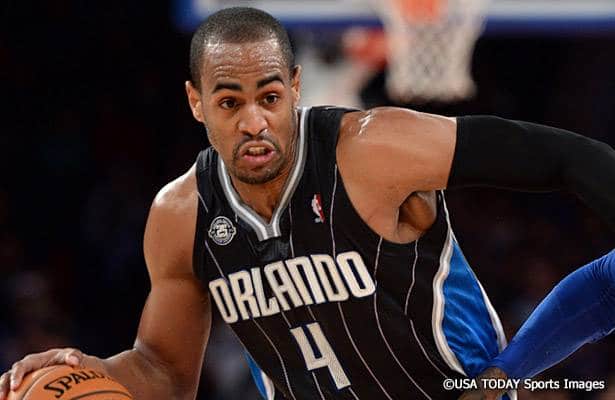 Afflalo Opens Up About Breakout Season

It’s no surprise to Arron Afflalo’s Orlando Magic teammates that he’s having the best season of his seven-year NBA career at 28 years old. Over the offseason, Magic players were predicting that Afflalo would have a breakout season.

Ask the average NBA fan what they think about the San Antonio Spurs and you are far too likely to hear that person talk about the age of the team and how boring they are to watch. After all, those have been the talking points regarding the Spurs for the past four or five seasons despite the fact that San Antonio has consistently been at or near the top of the Western Conference, age and all. This season has been no different, and for those who don’t watch the Spurs on a regular basis, there are some reasons to start preparing yourselves for another title shot by Tim Duncan, Tony Parker and the boys in black.

First of all, the Spurs currently hold the West’s top record despite the fact that those “older” players are hardly breaking a sweat. Better than anyone in the league, Spurs head coach Gregg Popovich knows how to pace his players and spare their aging bodies by giving them plenty of rest. If resting someone means the team is more likely to lose a game, so be it. The Spurs are not concerned about regular season records, division titles or individual awards. The only thing that matters is being healthy come playoff time and competing for another championship.

It’s close to the halfway mark in a long 82-game NBA season; so barring injuries or unexpected trades – maybe a few other variables – fantasy basketball owners know what kind of team they have by now.  Devoted owners are always looking ahead to the playoff rounds and wondering if their team is good enough to carry them all the way.  If that answer is unclear, it’s probably time to carefully analyze the waiver wire for gems.

Basketball Insiders is here to help you out in your waiver wire endeavors.  We’ve compiled a list of players who are showing signs of real improvement and just may be available in your league.  We suggest you find out sooner rather than later.

Six Things to Know About the Blazers

As the NBA season nears the halfway mark it’s time to look at the six things you should know about the Portland Trail Blazers as they begin the second half of the season.

After a three-season playoff drought and being a lottery team last season, the Blazers have exploded onto the national scene and are proving to be one of the surprise stories in the NBA. At 29-9, the Blazers currently own the third-best record in the NBA and sit just a game and half behind the defending Western Conference champion San Antonio Spurs for best record in the West.

Quiet as kept, the Toronto Raptors (19-18) are one of the hottest teams in the league posting a 10-4 record since December 20.

Toronto currently sits atop the Atlantic Division standings and if the playoffs were to begin today, the team would be the fourth seed in the Eastern Conference – marking their first postseason appearance since 2008. But despite the team’s recent success, the franchise remains at a pivotal crossroads as we peek into the future direction of the organization.

The fate of the franchise is now in the hands of newly crowned president and general manager Masai Ujiri.

Kobe Vows to Play For Lakers Again This Season

The Los Angeles Lakers record is just a number for Kobe Bryant.

Regardless of how many losses overshadow those in the win column, Bryant is determined to return this season from a fractured left knee injury. Sitting out the remainder of the year is not a consideration for him.

“The only thing I can consider, the only thing I can afford to consider, is getting better and getting strong,” he said prior to the Los Angeles Lakers game against the Boston Celtics at TD Garden. “I can’t allow myself to think any other way. I can only think about the next day. To do anything else becomes distracting. You give yourself wiggle room to not push yourself as hard as you possibly can. If I think that I’m going to sit out or this that and the other, then the motivation is gone. I refuse to have that happen.”

Warriors’ #Fullsquad Only Works With Bogut

After a 10-game win streak that spawned the #fullsquad meme, the Golden State Warriors have now lost three of four.  Their previously excellent defense has fallen on hard times, giving up points at a rate of 112.9 points per 100 possessions, and the squad as a whole has been outscored by 6.7 points/100 during that time frame.  That decline has coincided with a very worrying tendency: Mark Jackson has played Andrew Bogut much less. Even worse Bogut has not played down the stretch of the last three games.  In all of these games, the Warriors faltered in the fourth quarter without their best rim protector on the floor.

Is It Time For Minnesota To Trade Kevin Love?

In January of 2012, Minnesota Timberwolves forward Kevin Love inked a four-year, $62 million contract extension to remain in Minnesota. The deal did not include the Wolves one time franchise designation and gave Love a player option for free agency in July of 2015.

At the time the belief was the Wolves would need that one time roster designation for incoming guard Ricky Rubio and that extending Love down the road would be the way to keep the Wolves’ budding core together. The problem for the Wolves is as much as the plan seemed to make some sense on the surface, in practice the Wolves now find themselves in a tough spot.

Few things feel better than making a long-awaited return. As Basketball Insiders brings you its first Weekly Power Rankings, we understand that quite well. But it is Rajon Rondo of the Boston Celtics who is the catalyst behind that declaration. Though it was far from an auspicious 2013-14 season debut, Rondo returned to the lineup for the Celtics on Friday night, almost a full year after tearing the ACL in his right knee back on January 27, 2013.

And therein lies one of the major story lines of the New Year: Returns.

Down in Memphis, Marc Gasol is helping the Grizzlies reaffirm their status as one of the conference’s tougher teams. After missing 23 games, Gasol returned to the lineup for the Grizzlies on Tuesday and helped his team take down the Oklahoma City Thunder—who have been playing tough, even with Russell Westbrook.

But the biggest return of them all? That distinction goes to New York’s other team—the Brooklyn Nets.

10 Players Who Shouldn’t Have Stayed in School

If it seems like there are more NBA fans this year rooting for their teams to lose than there are NBA fans rooting for their teams to win, the 2014 NBA Draft class is probably to blame. With so many potentially franchise-altering players up for grabs, teams view this season as the one to blow in favor of young talent in the draft, but a couple of recent reports indicate that the pool of talent may get a little shallower.

According to Dana O’Neil of ESPN.com, University of Kansas star Joel Embiid, considered by many to be the most likely No. 1 overall selection in this summer’s draft, could return to the Jayhawks for at least another year, while Sam Smith of Bulls.com believes that many NBA executives are getting the impression that Duke’s Jabari Parker—another top-three hopeful—also will not declare for the 2014 draft.

Both guys have their reasons. Embiid, for one, is extremely raw and can’t even drive a car yet. Parker, meanwhile, is not a typical blue-chipper in that he sincerely values education more than many realize.

Whatever the case may be, these are two guys who could opt out of heading into the draft despite a near-guarantee that they’d be top-three picks. Chances are, they’d be top-three picks again next year, but history has proven that this isn’t always the case. Here is a look at a handful of players that lost money and slipped down draft boards because of where they were selected.

Six Things to Know About the Los Angeles Lakers

The Los Angeles Lakers continue to fluctuate somewhere between a state of the ‘walking wounded’ and the ‘Walking Dead’ as we inch closer the February 20th trade deadline. After a surprising 10-9 start, the injury bug simply hasn’t stopped biting them at every opportunity. The players should absolutely be commended for maintaining to fight in most contests, but the front office has some work to do in the coming months.

End of an Era? Time for NY to Move Carmelo

In the tricky terrain that is today’s NBA, there are only two destinations worth travelling toward.

Smart, successful organizations are fully, wholly committed to one of two goals: Finishing first or finishing last. The teams that know they have a legitimate shot to capture the crown can, without regret, dedicate their resources to acquiring assets that pay immediate dividends, placing ultimate importance on short-term success. On the other hand, organizations that recognize they don’t yet have the pieces in place to win it all as currently constructed will think long-term and focus on the future.

If an organization hasn’t set up camp at either oasis (potential title contender or lottery loser) they find themselves sinking in the deadly quicksand that is the middle-ground of the NBA’s vast desert.

The Strength of Team USA

After faltering for a short period of time, the United States has re-established its global dominance in the game of basketball. Jerry Colangelo became the head of the USA National Team Program in 2005 and since then the senior national team has compiled a 62-1 record with first place finishes at the 2007 FIBA Americas Championship, 2008 Beijing Olympics, 2010 FIBA world Championships and 2012 London Olympics.

Becoming content and feeling like they could beat any other country with little preparation was the downfall of USA Basketball in the 2004 Athens Olympics. As preparation for the 2016 Rio Olympics and 2014 World Cup of Basketball in Spain begin, it’s clear that Colangelo and company is intent on not letting history repeat itself. A 28-player pool was released Wednesday and according to Colangelo it’s the best pool they’ve ever assembled.