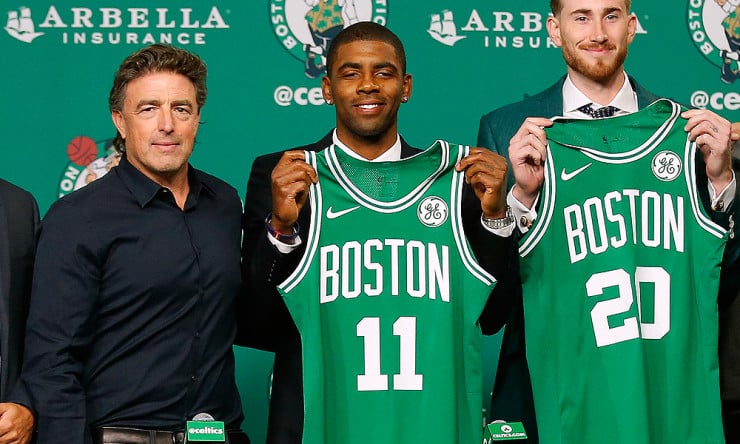 Boston Celtics Ready To Rule NBA East For A Decade

As the Cleveland Cavaliers and Toronto Raptors experienced massive offseason change, the Boston Celtics proceeded into summer 2018 with calm confidence. After an incredible run to the eastern conference finals without Kyrie Irving and Gordon Hayward, the Celtics didn’t need to wheel and deal. Instead, Danny Ainge remained rightfully confident with the personnel and prospects of Boston basketball.

The NBA east was shook with the news of Kawhi Leonard joining The North, but the Celtics remain favorites in the east. Toronto’s odds to win a championship are listed at +2000 while Boston has a +650 line, according to CanadaSportsBetting.ca.

Teams like the Philadelphia 76ers and Milwaukee Bucks will also challenge Boston – now and in the future – but all signs point to an extended period of eastern conference dominance for the Celtics. The Bill Russell era will never repeat, but Boston’s stockpile of youthful stars, future picks and organizational wisdom could set the pace for the next decade.

Fellow rookies Donovan Mitchell and Ben Simmons received the lion’s share of attention for their superb inaugural season, but Jayson Tatum might be the finest baller of the 2017-18 class.
Ben Simmons possesses the more dominant, LeBron-style physicality while Donovan Mitchell could be the best pure scorer of the 2017 NBA draft. As such, both deserved votes received for best regular season rookie. In the playoffs, Tatum left both freshman in the wake of his historic performance.

Post season work crowns any achievement during the regular campaign – just ask King James, who declared Tatum “built for stardom” after the 2018 Eastern Conference finals. Jayson lead the Celtics deep into the eastern bracket despite the absence of Kyrie Irving and Gordon Hayward, scoring 18.5 PPG over 19 games.

Jayson became the first rookie since Kareem Abdul-Jabbar to notch ten consecutive 20-point games in the playoffs. Tatum was within a single point of breaking Kareem’s freshman record of 352 total points in a single postseason campaign. Sure, Abdul-Jabbar required nine fewer games to amass his total, but this takes nothing away from Jayson’s remarkable introduction to high-stakes pro basketball.

Tatum’s ability to score when points are most scarce reflects the type of skill, mental fortitude, and dedication to fundamentals that transforms top athletes into NBA superstars. This doesn’t include Tatum’s already sound defense, which prevents the opposition from playing him off the floor like Enes Kanter.

“He can get a lot better,“ Celtics coach Stevens said after the conference finals. “I think there are so many little things that he’ll continue to improve upon.”

“Wait ‘till you see him in two years,” Al Horford praised. “He’s way ahead of the game.”

Perhaps the most stunning compliment would be the tacit vote of confidence from GM Danny Ainge over the 2018 offseason. The Celtics refused to part with Tatum for Kawhi Leonard when given the opportunity. Leonard would’ve all but guaranteed an NBA Finals appearance for the Celtics over the next five years after re-upping for the max.

Instead, Boston believes Tatum contains the potential of a generational franchise player, capable of powering a dynasty.

A half-decade of swindling opposing GMs defines the tenure of GM Danny Ainge. Hoarding first-round picks hasn’t always been popular with Celtics faithful, but a surprise run to the eastern conference finals represents the first wave of success for this strategy. Unlike Philly’s “process”, which involved an historic volume of losing, Boston required only a brief teardown for the picks necessary to reboot.

Boston’s already been richly rewarded for their first wave of first round lottery picks, selecting Jaylen Brown and Jayson Tatum in 2016 and 2017. These two picks alone would be considered a success, but talent like Terry Rozier and Marcus Smart have proven themselves as strong playoff competitors too, selected in the first round during years prior. Rozier’s fantastic performance during the 2018 playoffs, which included ice-cold shotmaking, sparked discussion of Kyrie Irving’s redundancy – previously unthinkable before Irving went under the knife.

Danny Ainge has been so crafty that he stole a lottery pick in 2019 by picking Jayson Tatum – the player they wanted all along – while bluffing Philly into trading up for Markelle Fultz. Over the next three years, the Celtics have their own pick, along with a 2019 first round selection from the 76ers or Kings, and a pick from Memphis and the Clippers over the next few years, depending on conditional protections.

These six picks give the Celtics an absurd amount of leverage and options when pursuing talent. Boston can outbid any team in the NBA in a trade war. Worst case scenario, one or two of these picks develop into stars, eventually replacing aging or injured contributors.

Most teams buckle under the injury pressure experienced by the Celtics during the 2017-18 campaign. Instead, Boston discovered a substantial silver lining of youthful, resilient talent, envied by the rest of the association.

There’s no insult in referring to Kyrie Irving and Gordon Hayward as somewhat fungible after Boston’s amazing run through the eastern conference. The Celtics were one game away from the NBA finals without Irving and Hayward, which hints at their replaceability in the grand scheme of basketball.

He may not be a plus defender, but Kyrie Irving remains an elite scoring point guard, capable of getting his own bucket under any circumstances. Gordon Hayward will be the star Boston lured from Utah, combining elite shooting and sneaky athleticism which coach Stevens will leverage to great success.

Ideally, the Celtics would love to keep all their talent together, but the reality of the salary cap will force Danny Ainge’s hand at some point. On paper, losing Irving because of severe luxury tax problems becomes less of an issue with Terry Rozier turning into a star guard. Hayward’s role as a small forward will be scrutinized if Jaylen and Jayson fulfill their promise.

In an NBA which features the highest rate of star turnover in pro sports, Boston’s ability to replace their superstars with young, elite talent improves their immediate outlook while ensuing a bright future during the 2020s.

The Wisdom Of Horford & Stevens

Youthful talent fuels the upcoming dominance of the Celtics over the eastern conference. However, without veteran leadership, the potential remains unfulfilled. Cue the on-court intelligence and leadership of Al Horford, who helped Boston remain calm and organized throughout the chaos of the 2017-18 season. Kyrie should also receive acclaim for helping Rozier and other young scorers fill Irving’s shoes.

Coach Stevens seems to be the rare bench boss who combines outstanding personnel and play calling strategy with motivational skills which speak to rookies and veterans alike. At the age of 41, Stevens isn’t a generation removed from the 32-year-old Horford. Both will remain for at least a couple of seasons to mold the Celtics into a long-term favorite. Al’s only human, but he might decide to remain with Boston if the current atmosphere of winning continues.