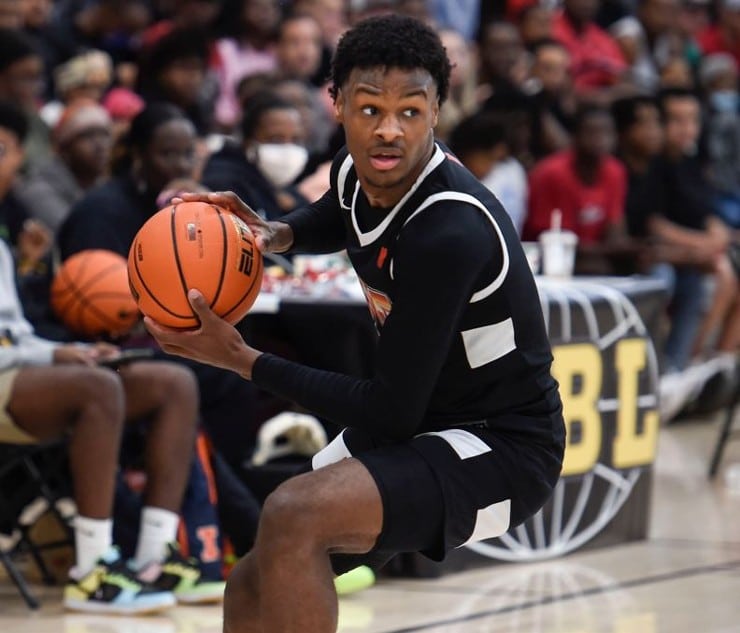 Bronny is also one of five athletes to sign a Name, Image, and Likeness (NIL) deal with Nike on Monday. Caitlin Clark, Haley Jones, Juju Watkins, and DJ Wagner inked deals as well.

Of course, DJ is the son of former Cleveland Cavaliers guard Dajaun Wagner. According to ESPN’s Top 100 players list, Wagner is listed as the No. 1 overall prospect for the class of 2023.

Some NBA betting sites are giving the Lakers top-10 odds of winning the championship in 2023. Check out which sportsbooks are anticipating another NBA Finals appearance.

Hit that ❤️ to show them some love and welcome them to the Nike Basketball fam. pic.twitter.com/xIPZN2raOS

Per the 247Sports ranking, Bronny James is a four-star recruit. He ranks 41st overall in the nation, 10th as a combo guard, and 10th in California.

While it’s unknown how much Bronny’s NIL deal is worth, this is likely a multimillion-dollar contract. On May 22, 2003, LeBron signed a seven-year, $90 million contract with Nike.

Bronny James has signed a large NIL deal with Nike

LeBron inked his multi-year deal with the company prior to the Cavaliers selecting him first overall in the 2003 NBA Draft. As it turned out, James’ contract was worth $25 million less than the $115 million Reebok offered him.

Based on the On3 NIL deal tracker, fellow classmate Juju Watkins has an unknown NIL value. Though, Wagner’s worth is an estimated $662,000. In comparison, Bronny James’ value is a whopping $7.3 million.

The baller has millions of followers on TikTok and Instagram.

During Bronny’s freshman season, in 34 appearances, he averaged 4.1 points and 15 minutes per game. On November 21, 2019, Bronny made his high school debut. With Sierra Canyon, he finished with 10 points off the bench against Montgomery High School.

James then scored 15 points in a win over St. Vincent-St. Mary High School, LeBron’s alma mater, on Dec. 14. He was named MVP.

Furthermore, on January 15, 2020, Bronny scored a season-high 17 points in a win over Viewpoint School.

During his sophomore season, the young star tore his meniscus, resulting in season-ending surgery.

Additionally, the senior guard has received offers from Memphis, Ohio State, and USC. Since the James family has ties to “The Buckeye State,” there’s a good chance he’ll commit to Ohio State.

Plus, Eric Bossi submitted a scouting report on Bronny James during his junior year. “Slowly but surely, Bronny James is starting to come into his own as a player on a loaded Sierra Canyon team.”

“James’ 6-foot-3 frame has filled out nicely and he’s added some pop on drives to the rim through traffic or in transition. One of his strengths is his ability to make catch and shoot jump shots and he is a fantastic passer.”