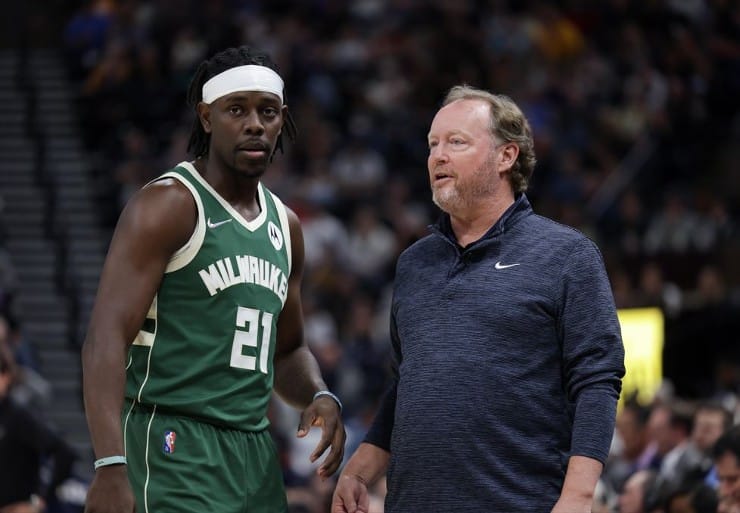 Milwaukee Bucks head coach Mike Budenholzer coached DeMarre Carroll on the Atlanta Hawks. Now, Carroll has the opportunity to work under Budenholzer in Milwaukee as an assistant coach.

After practice on Tuesday, the veteran coach was asked about Carroll’s impact on the team. “MarJon [Beauchamp] is already leaning on him,” explains Budenholzer.

“I hope Jordan [Nwora] is. There’s nothing like players that have experienced that, really understanding a role and thriving in that role. And that’s when you’re young, you just want to get on the court.”

Can the Bucks win another championship in 2023? Multiple NBA betting sites are showing top-3 odds for Giannis Antetokounmpo and the rest of the team to return to the Finals.

“You just want to find a way to get your minutes, find a role, and find a way that you can help the team win,” continued Budenholzer. “And really, that’s what DeMarre did.”

“So for me, it was exciting to think about adding DeMarre because when he spoke to the players, particularly to Jordan, particularly to MarJon, he speaks with a lot of conviction and a lot of belief in what we’re doing. I already see it. I hope it just continues and grows.”

Carroll played for eight teams during his 11-year NBA career. He was added to the Bucks coaching staff in August, months after Darin Ham was hired as the next head coach of the Los Angeles Lakers.

Budenholzer’s most successful season as the Hawks head coach was back in the 2014-15 season. The team accumulated a 60-22 (.732) record and ranked at the top of the Eastern Conference.

That season, in 70 appearances, Carroll averaged 12.6 points, 5.3 rebounds, 1.7 assists, and 1.3 steals per game. Of course, the Hawks were later swept by the Cleveland Cavaliers in the ECFs.

Though, it was still a great season for Budenholzer and Carroll. The assistant coach aims to develop Nwora and Beauchamp’s game during training camp.

Last season, the Bucks finished 51-31 (.622) and third overall in the Eastern Conference. During the first round of the 2022 NBA Playoffs, Milwaukee defeated the Chicago Bulls in five games.

However, in Game 2, the Bucks lost Khris Middleton for the remainder of the playoffs after the forward sustained a medial collateral ligament (MCL) sprain in their 114-110 loss to the Bulls.

Then, Milwaukee went on to lose in seven games against the Boston Celtics in the second round. Maybe next season the Bucks will stay healthy come playoff time.