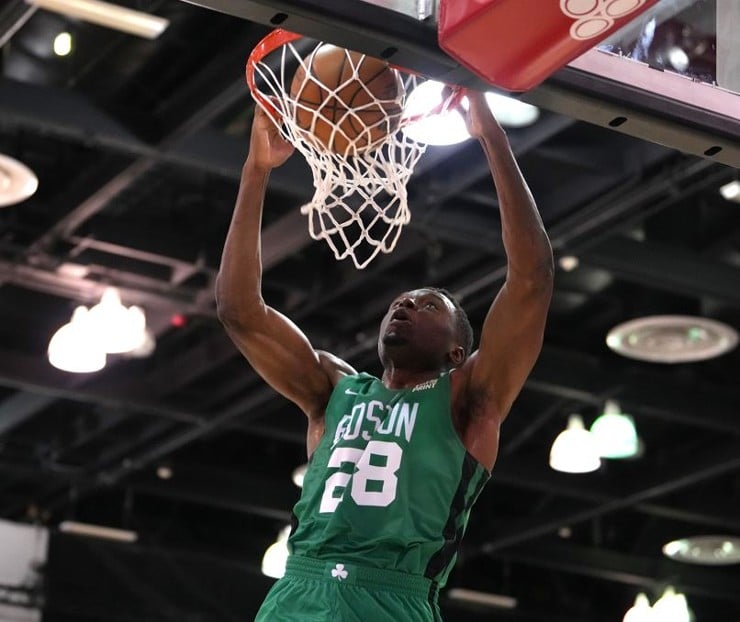 Boston Celtics center Mfiondu Kabengele is grateful to receive mentorship from teammate Jaylen Brown. The 25-year-old appreciates his help. In July, Kabengele signed a two-way contract with the Celtics.

During training camp, Brown asked the 6’9″ center if he had studied all the plays. It turned out that Kabengele needed his assistance, hoping to earn potential second-unit minutes.

Per multiple NBA betting sites, the Celtics have top-3 odds of winning a championship in 2023. Check out which sportsbooks are expecting the Eastern Conference contender to return to the Finals.

“JB’s the one that brought me in, that presented to help workout with me. I didn’t even ask him,” Kabengele revealed to The Athletic during an interview. He wants to win with the Celtics. That’s the bottom line.

“I’m very thankful because I really care, and I want to help [us] win. I’m glad he sees that, so it’s pretty cool. He told me tips and tricks on how to angle it, how I should roll, things to look for before I set a pick.”

“I asked him a lot about pick-and-roll angles, how I should roll and what I should look for. It is a little selfish, but I want to roll so I can be a threat as well.”

Moreover, the Florida State product was selected 27th overall by the Brooklyn Nets in the 2019 NBA Draft. However, he was then traded to the Los Angeles Clippers.

He spent a season-and-a-half with Los Angeles before being dealt to the Sacramento Kings on March 22. Though, the Kings waived Kabengele three days later.

“I know that [Jayson Tatum] and Jaylen, they’re that “guy” and you got to respect what they do,” continued the Celtics center. “So, I’ll ask Jaylen how can I be a threat when I’m setting screens.

After signing contracts with the Cleveland Cavaliers and Houston Rockets, he was then waived by both teams. Last season, in 16 games played off the bench with the Cavs, the center averaged 4.3 points and 2.9 rebounds per contest.

“I’m not the same person I was in my rookie year, or even last year when I was in the G League,” mentioned Kabengele. “A lot of times, I would come into games and practices and think, ‘All right, I have a skill set.'”

“It was a little bit of arrogance I had. It wasn’t laziness, but I had a good sense of what I needed, then every time I fail and go through these things, I’m like, ‘Why are things not working?’ Then I did some self-reflection.”

Of course, the young center will have the chance to prove himself with the Celtics this season.