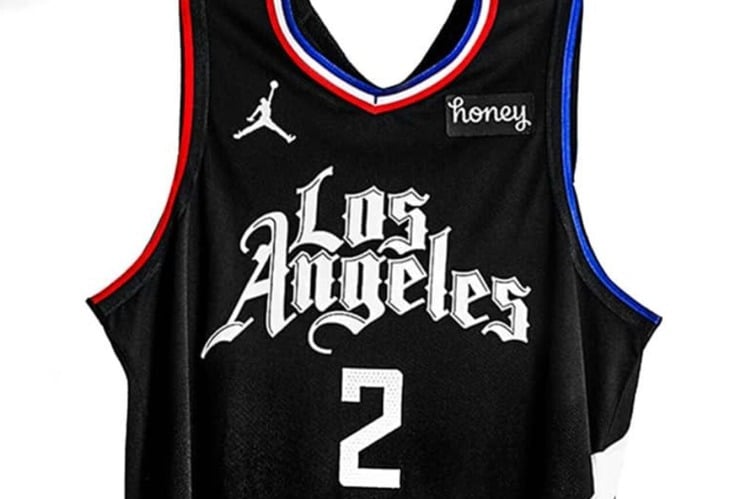 The Los Angeles Clippers have unveiled new Statement Edition uniforms for the 2022-23 season. On the front of the jersey, the words “Los Angeles” were designed by L.A. tattoo artist Mister Cartoon. So, the wordmark is making its return.

Furthermore, Mister Cartoon’s wordmark first appeared on the Clippers’ City Edition jerseys for the 2019-20 season. However, “Los Angeles” appeared as a black wordmark on white jerseys.

Pertaining to sports betting, a few NBA betting sites are showing top-5 odds for the Clippers winning a championship in 2023. Check out which sportsbooks have them surviving the Western Conference.

A white sail design is also visible on the sides of the shorts and jersey. Since the 2017-18 season, “CLIPPER NATION” has been printed on the tag of each uniform as well.

Not to mention, the full-color primary icon logo is on the left side of the shorts.

Per the team’s website, the red and blue outline around the left and right arms of the jersey symbolize maritime navigational lights.

The Clippers are scheduled to wear the black Statement Edition jerseys when they host the Los Angeles Lakers on Wednesday, Nov. 9.

Of course, a State Edition court showcasing Mister Cartoon’s wordmark will be featured for 10 home games throughout the season. This court design is for a select few Wednesday and Thursday games.

According to the Clippers’ official Twitter account, the new uniforms best suit the City of Angels. The Clippers tweeted: “This uniform symbolizes the team’s driven mindset, relentless style of basketball and the commitment to the city of Los Angeles.”

This uniform symbolizes the team's driven mindset, relentless style of basketball and the commitment to the city of 𝕷𝖔𝖘 𝕬𝖓𝖌𝖊𝖑𝖊𝖘.

In 1978, the Buffalo Braves relocated to San Diego. This move occurred seven years after the San Diego Rockets moved to Houston. Following the move, members of the front office met to discuss a new team name.

The owners thought “Braves” was a terrible sports name for a San Diego-based basketball team. In the end, they agreed a name contest drawing was the way to go.

As a result, front office officials landed on Clippers, considering the number of sailing ships that passed through San Diego Bay. A clipper was a fast mid-19th century sailing vessel.

When the Clippers moved to Los Angeles in 1984, they kept the name.