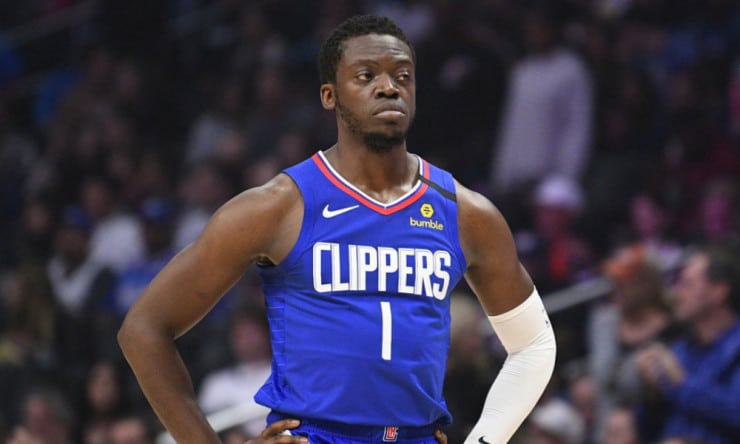 The most consistent member of the Los Angeles Clippers this postseason is Reggie Jackson. In his tenth NBA season, the veteran guard’s gone from a backup eager for more responsibility to a franchise floor general, and now, he’s operating in his optimal role.

Jackson’s shouldering less of a burden than he was with the Detroit Pistons. Even in Kawhi Leonard’s absence, he has the luxury of playing off a potent perimeter scorer in Paul George, freeing him up to act as a lead guard who also makes a significant impact attacking off the catch.

Jackson is the Clippers’ third-leading scorer this postseason, averaging 18.1 points per game while making 49.2 percent of the 13.3 shots he’s taking from the field. He’s also dialed in from distance, draining 41.5 percent of the 7.5 threes he’s hoisting. According to NBA.com, he’s shooting 47 percent on 4.6 catch and shoot three-point attempts per game.

The former Boston College Eagle is a threat to score from all three levels. Whether stepping into open space an opposing big man yields to protect the rim, taking circuitous routes coming off screens or using a simple side-step, Jackson is excellent at creating clean looks from the mid-range, an area he’s shooting 60 percent from in the postseason, per NBA.com. The 6-foot-2 Jackson also makes good use of his 7-foot wingspan, which he pairs with the necessary strength to shield off defenders when he drives to the cup.

After averaging 15.4 points and 2.7 assists per game in the Clippers’ opening-round matchup with the Dallas Mavericks, Jackson upped his production in both departments in Los Angeles’ series against the Utah Jazz, generating 18 points per game and four assists, elevating his performance in Leonard’s absence. Through five games in the Western Conference Finals, he’s again raised his scoring output. Jackson’s producing 21.8 points per contest, but he’s dishing out fewer dimes (2.8). Unless Leonard returns, for Los Angeles to get to the Finals, it may require him continuing to score 20 or more points per game while once again facilitating at least four assists per contest.

Even if that doesn’t happen, or it proves not to be enough to help propel the Clippers to their first NBA Finals appearance, Jackson has earned himself a sizable contract this summer. Last season, after he got bought out of his contract by the Pistons, he joined the Clippers, signing for the veteran minimum in the middle of the 2019-20 campaign. Unfortunately for him and his new team, it wasn’t a smooth transition. Jackson averaged 9.5 points and 3.2 assists in 17 regular-season contests, and in 12 playoff games, he only produced 4.9 points and less than an assist per game.

As a result, he returned to a Los Angeles team hamstrung against the cap. Despite the capability to give him a 20 percent raise last offseason, he signed for less of a pay bump, going from a deal paying him just over $734 thousand to making $2.3 million while counting $1.6 million against the Clippers’ cap this season.

Ideally, Jackson re-signs with the Clippers this offseason. As mentioned earlier, he’s thriving in the role he’s best-suited for, playing on a team capable of competing for the Larry O’Brien Trophy, and he’s doing so alongside a close friend of his in Paul George. The two of them have discussed the idea of teaming up since Jackson was with the Pistons and George was a member of the Indiana Pacers. However, given the Clippers’ cap constraints, even with Jackson’s Early Bird Rights increasing what they can offer him to slightly north of $10 million, he’ll likely receive richer offers than that.

He may decide that for the reasons above, he’ll take less than market value to stay in his current situation, but since the Clippers have to rely on using an exception to keep Jackson as opposed to signing him into cap space, there isn’t much they can do to raise their offer. Even though Luke Kennard’s four-year, $64 million contract extension, which has him on the Clippers’ books for $12.7 million next season, isn’t the only roadblock to signing Jackson into cap space, it makes that decision look worse.

If Jackson opts to sign elsewhere, at least in large part due to another team’s ability to make a more lucrative offer, the New York Knicks, Miami HEAT and the Mavericks are the potential suitors who make the most sense. Dallas saw firsthand this postseason how effectively the versatile scoring threat can play alongside a bona fide top option. Adding someone who can generate offense is a pressing need for the Mavericks. The Knicks and the HEAT are hoping to land high-profile players this offseason, such as Damian Lillard and Kyle Lowry, but if that doesn’t work out for them, at the right price, Jackson would be a nice consolation prize.

It’s rare to go from playing for the veteran minimum to having offers north of $10 million. However, Jackson, who has scored the eighth-most total points in the NBA playoffs this year and has made more threes than anyone else in the postseason, has set himself up to accomplish that feat.

Bobby Krivitsky is an NBA analyst for Basketball Insiders.