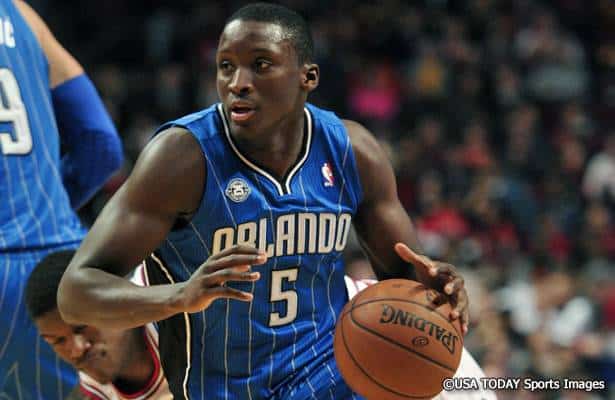 It was only a few years ago that the Orlando Magic were a contender and one of the top teams in the Eastern Conference. Those were the days when Dwight Howard was liked in Orlando, Hedo Turkoglu was playing at the peak of his career and Rashard Lewis was in Central Florida rather than South Florida.

Now, the state of the Magic is much different compared to then, as relationships have soured and Howard has gone through a blockbuster trade and a summer of free agency to land in Houston.

That blockbuster trade the Magic made nearly two years ago saw them acquire young players such as Nikola Vucevic and Maurice Harkless, while also bringing in a proven scorer in Arron Afflalo. The trade also brought in a total of five draft picks, including a potential lottery pick from either the Denver Nuggets or New York Knicks, and allowed the Magic to dump several bad contracts.

Orlando has gone 41-117 since trading Howard, so that begs the question: how can the Magic be fixed? Here are several steps for Orlando to right the ship:

June 26 will be a huge night for the Magic as the team could have two lottery picks to work with. The Magic will have their own pick and they’ll also have a pick from either the Denver Nuggets or New York Knicks. The Magic will be drafting the best available player when it comes time to announce their pick, rather than drafting based off of need. This approach will be beneficial to the team throughout the night when working the phones for trades.

With the top of the draft loaded with players like Jabari Parker, Dante Exum, Andrew Wiggins and Marcus Smart among others, an argument can be made that any one of those players would be able to step in and contribute immediately. Many believe the team will take a point guard to pair with last year’s No. 2 overall pick Victor Oladipo in the backcourt, and it would certainly make for a fun duo to watch if they take a player like Exum. That’s who Steve Kyler has the Magic taking in his latest mock draft. Exum stands at 6’6 and has incredible speed given his size. Exum would present a challenge to opposing defenders with the height difference and he could even develop into the main wing defender that many teams look to have to defend players like LeBron James, Kevin Durant, Paul George, etc.

Kyler also has the Magic taking Kentucky center Willie Cauley-Stein with their second pick in the first-round, a selection that makes sense given the team’s lack of size off of the bench. With Kyle O’Quinn moving from the bench to the starting lineup, the team relies mainly on Andrew Nicholson now off of the bench to provide size down low. Adding a big man in Cauley-Stein would add another body in the second unit that will avoid matchup problems.

Answer the questions regarding the roster

Perhaps the biggest question mark surrounding the team is which current players will actually be on the roster come fall? With the Magic, there is no such thing as an “untradeable” player because the team doesn’t have a star and is constantly searching for ways to get better. The Magic don’t have a LeBron James on the team, so they aren’t tied down to any one player.

With players like Afflalo and Jameer Nelson on the team, there will surely always be trade rumors surfacing given the size of their contracts and, in Nelson’s case particularly, age. Many analysts around the league had Afflalo and Nelson as likely trade candidates at this year’s deadline, but when February 20 came and went, those two were still on the team. For the right price, anyone on the team can be moved so it was apparent that Magic general manager Rob Hennigan wasn’t blown away by any one offer. Hennigan and the Magic could greatly benefit from a team that was just one piece away from making a short playoff run into a deeper one, so a player like Afflalo, who has proven to be a capable scorer, will come in handy on draft night when trades are executed frequently.

Nelson’s future is an interesting topic heading into the final stretch of games for the Magic. Nelson will be entering the final year of his contract next season that will call for him to make $8 million, but he is only guaranteed $2 million of that. Nelson has said publicly that he would like to retire with the Magic, but do the Magic want to waste a roster spot and playing time on an aging player during a crucial rebuild? One can argue that now would be a perfect time for the team to cut their ties to Nelson and begin Oladipo’s reign as Magic captain.

Both of these players have shown flashes of what they can become, but it’s going to take additional work for them to play at the highest level each night.

Harkless has the physical tools to become a premier defender in the league and he has shown on the offensive end that he can make the electric plays a team needs.

O’Quinn has come into his own during the course of the season, and has recently benefited from the departure of Glen Davis. His play has earned him a spot in the team’s starting lineup for the last 12 games where he has averaged 8.2 points, 6.4 rebounds and 1.8 blocks per game. One major area O’Quinn has improved is his shot blocking. Last season, he recorded just 26 blocks over 57 games; this season, he has 72 blocks over 62 games. With another summer of workouts and practice, O’Quinn and Vucevic down low would be something the team can build on in years to come.

The Magic have been experimenting with Oladipo at the point guard position this year with the results coming in as mixed.

Oladipo ranks near the top of the league in turnovers so his transition has come with expected growing pains. The Magic were a team that needed a player to attack the rim and get easy layups and draw fouls, but if the Magic draft a player like Exum or Smart, Oladipo could play more at his natural position and let the new point guard run the team. Head coach Jacque Vaughn has already said as much, hinting that the draft and free agency could set the role Oladipo has with the team next year.

Change the attitude of the team

At the start of the last two seasons, the Magic had a decent record, with guys coming into the new seasons highly energized and believing the team could win. After the shock of a new season wore off, it seemed the players began to realize their expectations were a bit too high and they settled into the team many projected them to be.

Two seasons ago, the Magic began their first 25 games by going 12-13 and then finished off the last 57 games by going 8-49. The team started this season 3-3 to start and then fell deep in the Eastern Conference’s basement, where they have remained. It will be important for the Magic to bring in players who can work hard for 82 games and, looking at Hennigan’s track record, that will likely be the case.