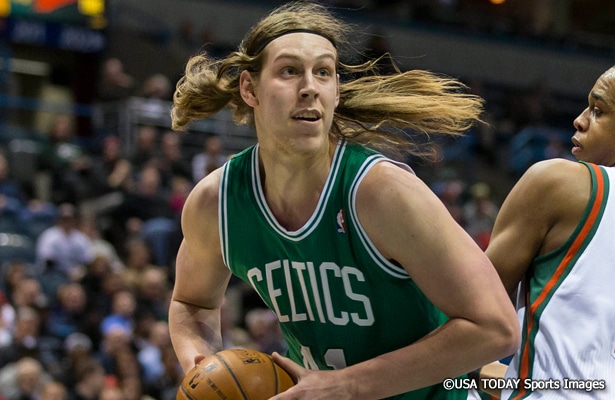 If Boston Celtics big man Kelly Olynyk had been going home for the All-Star Break, it probably would have happened. But now that he has headed to New Orleans for the weekend, there’s no chance he’ll be getting a haircut.

Olynyk’s hair has been growing as much as his game during his rookie season. The Kamloops, British Columbia native has never had it cut in the United States, and his locks will continue to lengthen for the rest of the season now that he’s traveling south to participate in the BBVA Compass Rising Stars Challenge.

“I don’t know (when I will cut it),” Olynyk told Basketball Insiders. “I’m undetermined.”

The legend of his tresses began when Olynyk was attending Gonzaga University. He lived with two soccer fans who got him watching European games. Olynyk noticed a Spanish player, Sergio Ramos, who sported long hair held back with a headband during matches. The college student was inspired.

“I saw Sergio Ramos’ hair and all these other European soccer players,” Olynyk explained. “They wore a little band and had it (their hair) behind their ears. I liked how it looked and I wanted to try it out, so I just started growing it. Part of it was because I’ve never gotten my hair cut in the USA. I always had it cut in Canada.”

Olynyk doesn’t have a specific reason for Canadian-only salon visits. It’s just something he does, part of his no-explanation-necessary mentality.

“(Long hair is) kind of against the social norm, I guess. I just like the flow,” he said. “It’s just kind of part of my style now.”

Olynyk estimates he owns around 10 hair bands and he keeps them on hand in his locker at TD Garden, at the Celtics practice facility, in his backpack and at home. He has a variety of colors, but can only wear certain ones during games per NBA uniform guidelines.

With another half of the regular season to play, Olynyk will have to wait a few months for an official haircut. In the meantime, he has a backup solution if he really needs to manage the length.

Turns out, getting a haircut isn’t the only activity Olynyk has never done in the United States.

“I’ve never went to a movie theater in the U.S. either,” Olynyk shared. “I don’t know what I would say (if I was invited). I’m not a big movie guy, to tell you the truth. I like to watch some movies here and there, but not really at the movies.”

As unique as Olynyk’s routine is, it is working for him this season. He is averaging 6.9 points (seventh among rookies) and 4.7 rebounds (second among rookies) per game, including 8.0 points and 6.7 boards this month.

“You’ve just got to be free flowing,” Olynyk said. “Go with the flow.”