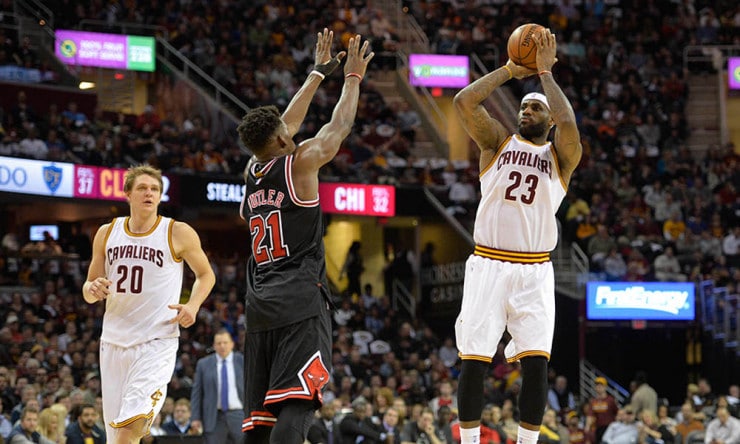 This series is going to be all about matchups, plain and simple, and mainly the matchups in the frontcourt. Chicago is loaded there, with Joakim Noah, Pau Gasol, Nikola Mirotic and Taj Gibson all ready and willing to handle a Cavs frontcourt that comes into this series without Kevin Love. But that doesn’t mean the matchups always are going to be great. If Cleveland starts LeBron James at the four as expected, Noah may end up guarding him, and his athleticism has been subpar as he continues to deal with his slowly-healing injuries. Gasol, meanwhile, can’t be looking forward to dealing with Timofey Mozgov, and neither player is really all that equipped to deal with Tristan Thompson. Defensively, especially with James at power forward, this could be a challenging matchup for the Bulls.

By that same token, there could also be some advantages there for Chicago. Gasol and Gibson have been great the last few weeks, and we’ve all seen what kind of mismatches Mirotic can create. It will be interesting to see how Tom Thibodeau and David Blatt deal with their frontcourts, and how those matchups ultimately determine which direction the series goes.

However, a much bigger concern for the Bulls is consistency out of Derrick Rose. When Rose plays like the 2011 MVP version of himself, the Bulls look like a championship team. When his legs are dead and he’s turning the ball over five or more times a game, Chicago doesn’t look so strong. Rose’s battle against Kyrie Irving should be epic, but Rose needs to hang with Irving every night for the Bulls to have a shot here.

Without Love, Cleveland has some massive adjustments to make. Don’t forget, they won’t have J.R. Smith for the first two games of this series either, which means they’re going to have to find other players on their bench to help stretch out the Bulls’ defense so that Irving and James can operate the way they’ve grown accustomed to all season long.

That means we’re going to see some combination of James Jones, Mike Miller and/or Shawn Marion, which three or four years ago would have struck fear in the hearts of opposing NBA second units. None of those guys have been all that significant for Cleveland this year though, and they’ll be expected to throwback to vintage versions of themselves, particularly in the first two games of the series. We’ll see if they’ve got it in them.

Without Love, the Cavaliers lose offense (particularly in terms of keeping Chicago’s aggressive defense honest), as well as rebounding, which hurts against the team that currently leads the playoffs in that very category. In other words, there are areas in which they’ll have to make up ground, even if they are still considered the favorites to win the series.

Cleveland isn’t a particularly adept defensive team, but Chicago obviously is a group struggling to put up points consistently, so who know how it will all shake out. Even a mediocre defensive team can deal with the crummy version of the Bulls, especially if LeBron is as motivated as he’s likely to be. Love didn’t help much there, anyway, so while he’s gone for the year, the Cavaliers still have enough to hang with the Bulls and possibly even tackle them over the course of a seven-game series. It should be a doozy of a matchup.

With Chicago coming off their best game of the postseason (that 54-point drubbing of the Milwaukee Bucks in Game 6), and with plenty of rest for some of their ailing stars, it won’t come as too big a surprise if they steal away Game 1 in Cleveland, as the Cavs will be so massively underhanded and adjusting to living without two starters. Expect the Bulls and Cavaliers to split those first two games. Beyond that, anything is possible.