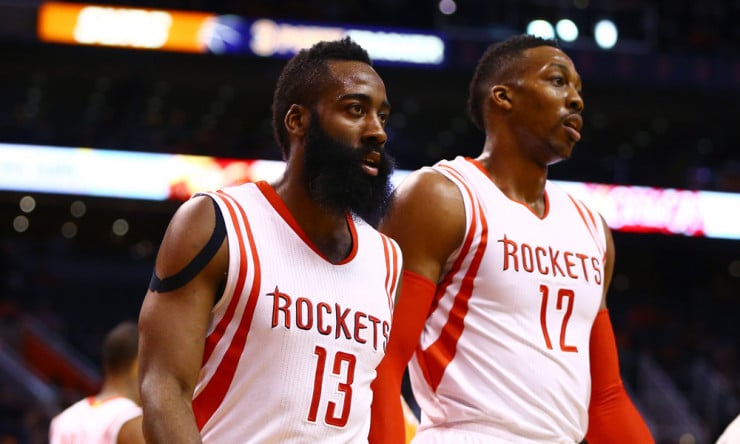 James Harden may not have won the 2014-15 NBA MVP award, but that doesn’t mean he wasn’t spectacular in answering any remaining questions about his leadership and maturity (hand shamelessly above my head). He led his short-handed Rockets to the second-most wins in an ultra-competitive Western Conference throughout the regular season and didn’t seem slow down his impressive pace during that first-round destruction of the Dallas Mavericks. His partner-in-crime, Dwight Howard, finally looks healthy – not to mention willingly in favor of the idea of accepting a defensive role as Harden continues to lead the offensive attack – and their Rockets look as deadly as ever.

Although still without the services of their best and most active perimeter defender in Patrick Beverley and floor-stretching big man Donatas Motiejunas, guys like Josh Smith, Corey Brewer and Terrence Jones have more than picked up the slack in terms of productivity as well as timely contributions. Chances are, they’ll need everyone to actively participate in scoring throughout this series, as even though Harden has been impressive, he actually seems to struggle on the offensive end against his hometown Clippers. Outside of one standout game that featured 18 foul shots for Harden, the Clippers are the one foe that has somehow made him look human this season.

Expect Harden to try to buck the trend and look to assert himself from the start, but this series could be won or loss depending on which team can own the backboards while putting forth the better or more consistent defensive effort, and which bench will provide the most throughout the series.

When Chris Paul hit the whirling, side-stepping game-winner to guarantee the NBA would crown a new champion this June, he not only exercised some personal demons related to facing the Spurs in the postseason, but also added the finishing touch on his team’s answer to whether they could ever win a really big game against a top opponent.

Yes, this was just the opening round of the postseason. We realize that. The thing is, even though they went into the series holding home court and are every bit as talented one through six as any team out there, how many of you really anticipated them finding the courage and grit that it took to seal the deal? Especially after the Spurs stole Games 2 and 5 at Staples? Time will tell whether these Clippers will finally (at least) qualify for a Western Conference Finals, but this core group has already shown a significant amount of growth having outlasted and outplayed one of the tougher No. 6 seeds we’ve seen in recent years.

The concerns about the depth and overall health of the team remain, but at least this team knows just how effective it can be when everyone bands together as they clearly did in Game 7. Blake Griffin and DeAndre Jordan were very effective against the Rockets throughout the season, and will need to impose themselves physically upon Houston for the Clippers to win this series. With as rejuvenated as Howard looks for the Rockets, don’t be surprised to see Doc Rivers actually look to offset his impact by attacking the paint in an effort to soften the middle of their defense in an effort to get Houston’s bigs in foul trouble. Also, even though Jamal Crawford played very well against Houston this season (games of 21, 20 and 24 points), the Rockets have multiple guys capable of going off for 20+ as a reserve. They’ll need contributions from someone other than Crawford.

The Clippers will attempt to ride the momentum of an emotional ending to their previous series, but look for a rested Rockets team to try to establish the tone and pace from the opening tip. Rockets take the first one.