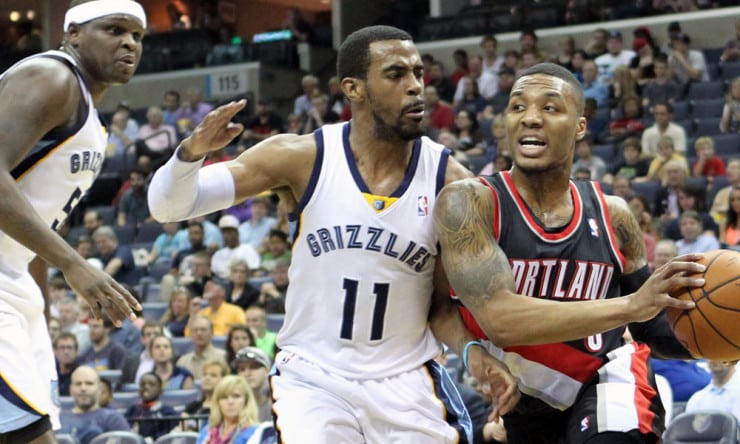 The Portland Trail Blazers entered Game 1 dealing with several injuries. C.J. McCollum started in place of Arron Afflalo, who is sidelined with a shoulder sprain. Considering the injury situation, the Blazers were going to need big performances from their two stars, Damian Lillard and LaMarcus Aldridge.

Aldridge filled up the box score, but was inefficient in doing so. He went 13-34 from the field, tallying 32 points, 14 rebounds and four blocks. However, Lillard was off his game and missed several shots he usually makes. Lillard and Aldridge both struggled early, starting out 0-11 outside the restricted area. Lillard made his first field goal at the 6:19 mark of the second quarter on a nice drive to the rim. As a team, the Blazers shot just 16-50 overall in the first half, at which point the game was essentially already over.

Nicolas Batum was able to play in Game 1 despite suffering a knee contusion less than a week ago. Batum looked healthy and was active throughout the game. Batum made three of his six three-point attempts and finished with 15 points, seven rebounds and four assists. Batum’s matchup with Jeff Green is pivotal, and he will need to keep producing at this level for Portland to have a chance in this series.

Moving forward, the Trail Blazers will need Lillard to find his touch, especially on his drives to the rim. More importantly, Lillard needs to figure out how to make more of an impact defensively as he was exploited routinely by Memphis’ guards in Game 1. If Afflalo is healthy and able to play, that will be a boost for Portland’s perimeter defense. Playing center Chris Kaman more often may also help as he was decently effective passing the ball and rebounding in limited minutes.

Portland has lost five in a row now overall, and are 1-10 in their last 11 games against Memphis.

The Memphis Grizzlies got Mike Conley (sprained right foot) and Tony Allen (strained hamstring) back into the rotation for Game 1 after each player missed the last few games of the regular season. Conley continues to struggle with his lingering foot injury, but moved well on the court and had a solid game (including finishing several and-ones).

But the story of the night was backup point guard Beno Udrih. He got off to a great start in Game 1, making his first six shots and scoring 13 points in the first half (in just eight minutes of action). Udrih continued to hurt Portland in the second half, finishing with 20 points, seven rebounds and seven assists. Lillard and McCollum struggled to slow him (and Conley) down all night and will need to put in a better effort in Game 2. It was apparent how much the Blazers missed Wesley Matthews in Game 1 as Memphis’ guards faced little defensive-resistance the entire night.

Zach Randolph and Marc Gasol did their usual damage in the post and from midrange. Randolph finished with 16 points and 11 rebounds and Gasol logged an impressive 15 points, 11 rebounds, seven assists and three blocks. Randolph managed to frustrate Aldridge on both ends of the court and pumped up the home crowd on several occasions.

Memphis’ perimeter defense was on point all night and their big men did a great job of protecting the paint. Memphis will look to keep forcing Portland into tough shots and limiting their open three-point attempts. Health will be an ongoing concern for Memphis, specifically Conley’s lingering foot injury and Allen’s hamstring.

Lillard should have a bounce back performance, but after Game 1, there is little reason to believe he and McCollum can contain Conley and Memphis’ other guards moving forward. Unless Afflalo returns healthy and makes a strong impact defensively, Memphis likely takes Games 2.