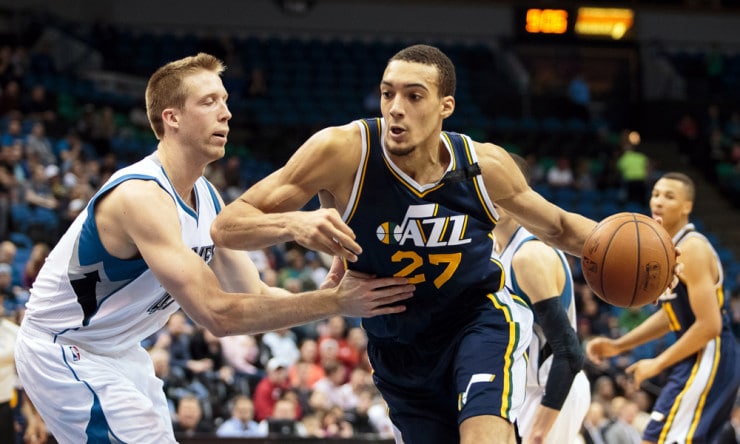 On the final day for 2013 draftees to ink rookie extensions with their clubs, the Utah Jazz and center Rudy Gobert have reportedly agreed to a four-year, $102 million extension set to kick in next season. The news was first reported by Adrian Wojnarowski of The Vertical.

Gobert, who was eligible for such an extension until 11:59 p.m. EST Monday night, would have entered the 2017 offseason as a restricted free agent had he and the Jazz been unable to reach an agreement. Gobert had previously indicated to local media members that he was willing to enter next summer without a deal. Given his very low cap hold due to being drafted at the back of the 2013 first round, the Jazz could have used the space they left open to try and sign other impact players before still retaining the Frenchman at a fair deal over their cap.

While locking in a deal now removes that potential space on their cap sheet, it also offers both sides relative security. The Jazz don’t have to contend with Gobert hitting the open market and potentially including poison pill details in his next deal, a reality that bit them a few years ago when Gordon Hayward was in a similar situation (as a result, they lost a year of control over Hayward when they matched an offer from Charlotte). Additionally, the Jazz are able to sign Gobert for slightly less than his maximum salary figure, a number he could easily have found on the market next summer. Gobert, on the other hand, locks in his payday as insurance for a career-altering injury or some other catastrophe.

Gobert, who averaged 9.1 points and 11 rebounds per game last season, has quickly established himself as one of the strongest interior defensive forces in the league since becoming a full-time starter for the Jazz under two years ago. His rim protection figures consistently rate at or near the top of the league among volume defenders, and ESPN’s Real Plus-Minus figures pegged him as a top-10 overall defender in the league on a per-possession basis last year after accounting for teammate and opponent context.

With Gobert locked down, it now remains to be seen whether the Jazz look to complete renegotiation-and-extension deals for Derrick Favors and George Hill, the two players eligible for such deals. Little has been reported regarding Hill down these lines, and it appears unlikely he and his representation would be willing to take such a deal simply because of how coveted the point guard could be on the open market when his contract ends after the 2016-17 season.

Favors’ agent told the Salt Lake Tribune last week that no deal was imminent for his client either, but that talks had at least taken place. Favors’ current contract would run out following the 2017-18 season if no extension is reached, though the possibility exists that the sides could revisit the topic next summer if they don’t get anything done by the Feb. 28, 2017 deadline to restructure the deals of Favors and Hill.