I don’t envy Fred Hoiberg. He, like Billy Donovan in Oklahoma City, walked into a situation where he was inheriting a team that, relative to expectations, has mostly underachieved over the past few years.

Particularly when many of the team’s star players rose to prominence under the predecessor — Tom Thibodeau in this case — the newbie faces an uphill battle as it relates to earning the respect and affection of his team.

To this point, Hoiberg does not seem to have excelled.

“You have to stick to your principles,” a noticeably frustrated Joakim Noah said after the Chicago Bulls recently lost to the New York Knicks at Madison Square Garden. “We still have a lot of work to do.”

Apparently, so does his head coach.

The NBA season is long. It’s filled with ups and downs, and frustration gets the best of even the coolest customers. But after mulling about the Bulls’ locker room recently—even before I learned of Jimmy Butler calling out his head coach—something seemed “off” to me about the team.

As a team, they didn’t seem happy or at ease. Over the years, they had endured injuries and shortcomings, but one thing that was never in question about these Bulls was their unity and toughness.

I will always remember a one-on-one conversation I had with Butler at Brooklyn’s Barclays Center during the 2013-14 season. Butler has begun making a name for himself as one of the premier up- 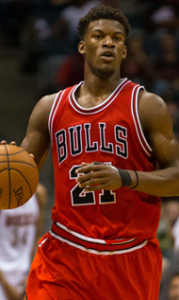 and-coming wing players in the league. During that talk, nothing controversial was said, but I do keenly remember Butler saying that the key to Thibodeau’s success was that he had one standard that he applied across the board to each and every player.

So when I hear Butler—a player whom I know to be both honest and down to earth—cite frustration with his coach being too “laid back” and not “getting on guys,” it concerns me.

And when I stand shoulder to shoulder with Joakim Noah and see him give one word answers to any and every question that could be interpreted as him putting himself and his demotion above his team, I knew that something was up.

The Bulls enter play on December 22 with a 15-11 record and the sixth seed in the Eastern Conference. They also enter play having lost three consecutive games and as a team that, to me, appeared nothing like the tough-nosed bruisers that they were under Thibodeau.

Noah was once heralded as one of the most versatile frontcourt players in the entire NBA. As he closes in on his 31st birthday, he has seemingly fallen victim to attrition. Since playing a career-high 37 minutes per game during the 2012-13 season, Noah has had trouble remaining at or near 100 percent so much so that the brass in Chicago thought it prudent to put him a on 32 minutes per game restriction for the duration of the 2014-15 season.

Meanwhile, as Thibodeau’s relationship with the front office frayed, whispers of Thibodeau’s supposed shortcomings as a head coach—his offense—grew louder.

After assuming the helm, Hoiberg, as many other coaches would probably do in his situation, opted to remove Noah from the starting lineup in favor of the impressive sophomore Nikola Mirotic. It was the quintessential trade of offense for defense, but in the process, Hoiberg may have lost the heart and soul of his team. That would be Butler, and yes, Noah. Even a hobbled Noah.

When asked what was wrong with the Bulls, Noah cited the team’s defense.

“Just the little things, guarding pick-and-rolls, stuff like that,” Noah said when asked specifically what has gotten into—or away from—this group.

Do you think Thibodeau would have ever benched Noah in favor of Mirotic? Do you think he would apply different standards to different players and fail to find a way to mesh Butler’s still-improving ability to single-handedly carry a team with Derrick Rose’s desire to prove that he can revert to his pre-injury form?

I don’t, and it’s pretty obvious that Butler doesn’t either.

For a team with so much talent, still so much untapped potential and premonitions of grandeur, a rookie head coach can quickly find himself in an unenviable predicament. Of course, Erik Spoelstra (though not a rookie at the time), David Blatt and Steve Kerr once faced similar circumstances and the latter two just so happened to square off in the Finals as a pair of rookie head coaches this past year.

Hoiberg would like to meet the same fate, but at this point, both figuratively and literally, without Thibodeau, the Bulls are much closer to the draft lottery than they are to the top of the Eastern Conference.