Home » news » High Expectations Have Chicago Aiming For The Postseason 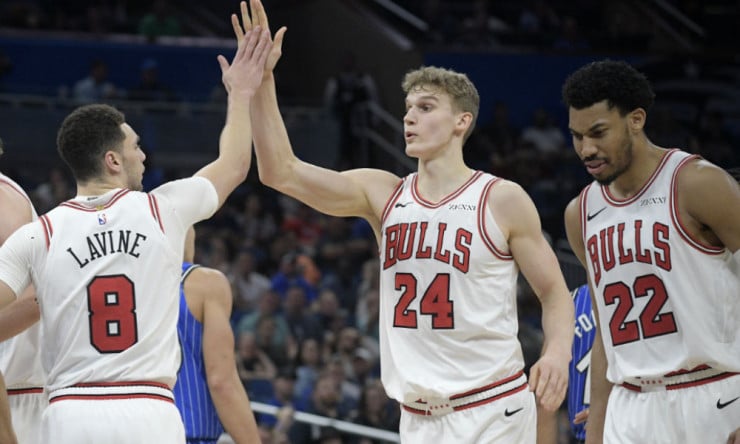 Rebuild can be an ugly word.

In the world of professional sports, where the ultimate goal is to reach the mountaintop — as Chicago Bulls’ head coach Jim Boylen would say — it signals to your peers that winning is not your top priority.

But thanks to the age of tanking, ‘rebuild’ is not typically thrown around without discretion. But at Chicago’s media day, it was used freely. But not in the sense that a rebuild was impending or continuing – instead, that it was finally coming to an end.

Speaking first on Monday, John Paxson, Gar Forman and Boylen, the Bulls’ front office headliners, were not shy about the expectations inside the Advocate Center.

Because of that, our goals this year are really simple. First and foremost, we want to compete at a high, high level. And when you compete at a high level, you have the ability to be a playoff-caliber team. And we set that as a goal.”

This comes after only 22 wins and a 13th-placed finish in the Eastern Conference last season, but Paxson didn’t shy away from that either: “We know as well as anyone that we’ve not done anything… but we like our talent level, and we like what we have in this building.”

This is a different song from the one that’s been played by the front office in the two previous seasons, a reality in which they often admitted the struggle to crawl out of rebuilding mode.

“I think we had a very, very productive summer on a number of different levels,” Forman continued. “It’s all been very encouraging.

“You can just see the vibe that has happened in this building as far as the camaraderie, with the new guys, the old guys, and I think just a belief system and putting in the work and what that means for them.

“We’re looking forward to all of that coming together, starting in practice.”

This shift in thinking has been observed and adopted by the players as well.

Wendell Carter Jr., recovered from the core muscle injury he suffered this summer — and practicing in full after an ankle scare on day one of training camp — confirmed the playoff mentality.

“The whole league has changed. A lot of stars have been shifted all around the league,” Carter said. “So, I feel like it gives us a really, really good opportunity, as long as everybody stays healthy, stays the same accord, to make it to the playoffs.”

“The mentality of the organization has changed. Since I’ve come here, just what we want to do here has changed.”

After only playing 15 games at the end of last season, Porter was joined by veteran free agent acquisitions like Thaddeus Young and Tomas Satoransky to form a stabilizing unit inside the locker room. Between the three of them, they’ve appeared in the postseason 14 times.

Young, who has by far the most playoff experience, and Satoransky, coming off an impressive FIBA performance this summer, were huge media day winners.

Young described his desire to join Chicago after facing off against them as an Indiana Pacer, where he was able to see how much he could bring to the young team.

When Satoransky was asked how he viewed the competition for the lead guard spot between himself, Kris Dunn and rookie Coby White, he said he wasn’t concerned – he was there to play and contribute any way he could.

The ability of Satoransky and Young to move across positions was also noted – Satoransky can defend one through three and shoots well enough to play off the ball, while Young often played the four in Indiana – and their switchability will be important cards for Boylen to hold as the season progresses.

However, nothing will be more important to Chicago’s playoff aspirations than All-Star hopefuls Zach LaVine and Lauri Markkanen. No one in the room shied away from the pair playing at that elite level. It would surely push Chicago in the right direction and they both embraced those expectations. LaVine, in particular, was clear in this regard, saying not only that they both wanted to play on Sunday, but also that he had an All-Star caliber season last year.

He may not be wrong — but the thing that held him back, and the thing that has held back much of the Bulls’ roster over the last few seasons, has been injury. LaVine and Markkanen played only 63 and 52 games, respectively, in 2018-19, thus birthing the third theme from Monday: Health. Obviously, the Bulls need to stay healthy to make a playoff run.

“One thing we always talk about is availability. We want to play all 82,” Markkanen said.

LaVine noted that victories can change the narrative, and Markkanen followed:

“Everything comes from winning. You’re going into your sixth year, [LaVine], and I’m going into my third year. And we haven’t won a whole lot of games. So that’s one thing that I know really pisses both of us off.”

John Paxson probably agrees and, when asked about players stepping up, he was frank: “It’s all about winning now.”

The whole organization has bought in from top to bottom — so after two rebuilding seasons, it’s now playoffs or bust for the Bulls.

Drew Mays is a basketball writer currently based in Louisville, Kentucky. Find him on Twitter @dmays0