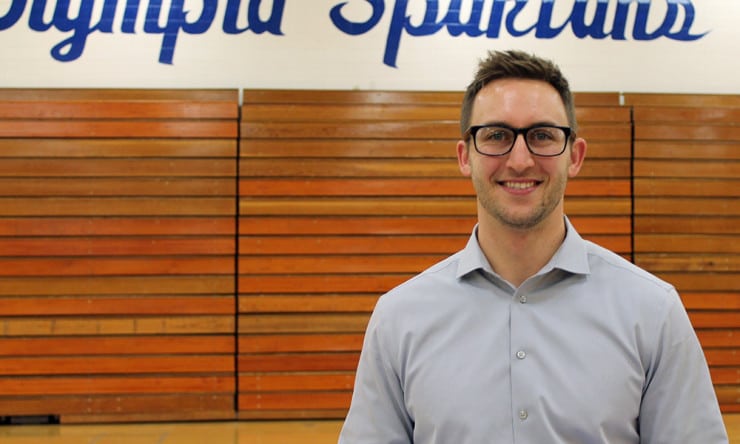 In the winter of 1999, 13-year-old Eric Elliott’s life changed in an instant.

“I started to notice rapid decline in coordination and was getting headaches and vomiting every morning,” Elliott said. “I had a dream at a young age to play college basketball. It was one of my biggest dreams, and growing up I was a very athletic kid at any sport. You name it.”

That winter, however, those dreams were all but shot down. One day, at his country home outside of Bloomington, IL, Elliott experienced his worst headache yet. It was so cripplingly painful that his father, Jeff, packed him up in the family pickup and attempted to brave the worst Illinois blizzard in over 20 years to get his son immediate medical attention.

Jeff almost immediately slid into a ditch only a couple miles from home, and with his son moaning in agony next to him, he got a hold of help, freed the truck from the drift and somehow managed to finish the long, slow drive to the hospital.

It was there that Elliott was given the most crushing news of his young life.

“We found out that I had a brain tumor the size of orange,” Elliott remembers. “A series of miracles led to me getting to the hospital and then later surgery. I basically had to relearn how to walk and run again without falling and having double vision. My doctor said I would never be able to play basketball again.”

The fact that Elliott did, in fact, learn how to walk and run, and the fact that he did learn how to shoot well enough to earn a full basketball scholarship to Carl Sandburg College in Galesburg, IL, despite having his depth perception totally destroyed in the operation, is the stuff of Hollywood. It’s such an incredible story that someone could have made a movie out of it.

While those actors suggest a comedic film, “Hoovey” is without question an inspirational film about determination to be taken absolutely seriously.

“The story is about me pursuing my dream even through hard times, my family going through a bunch of hard times as well and overcoming all that to achieve my dream of playing college basketball,” Elliott said. “My dad wrote a book in 2004 called ‘Rebounding from Deaths Door’ about all of this while I was in college playing basketball.

“Fast forward six years and in 2010 it gets into the hands of a script writer that wrote ‘Space Cowboys’ and he asked if he could write a movie about the book.”

The script was obviously picked up, and once the film was given a green light, things moved very quickly.

“My dad got the call because he was the author of the book,” Elliott said. “So he called all of us over for dinner one night and said, ‘Alright I have some big news for you, and I want to share this with you.’ As we are all sitting around the dinner table he broke it to us that someone had contacted him to write a movie about it and that they were actually going to make it into a movie. He gave us a list of ideas of actors he would want, and it was such an unreal moment. It almost felt like it was too good to be true. I didn’t tell my coworkers for several years into it because I was just so afraid of being that guy who is making up a story just to look cool.”

Whether the movie got made or not, Elliott’s story always was going to be cool. The fact that it actually was made into a film shows just how universal his tale of resolve really is.

The film officially launched on January 31 of this year, but hasn’t seen a typical nationwide release. Elliott and the people behind the movie are taking a different, innovative approach to getting the film viewed.

“This is a brand new marketing system through our studio, EchoLight Studios, a faith-based, Christian studio,” Elliott explained. “What they are doing is releasing the movie to churches and schools all around the nation. They can sign up to show the movie like a cinema, so they become the movie theater. They can charge ticket sales and part of the sales goes back to that church or school that’s hosting it.

“It’s like a fundraising event that is supposed to create buzz around the nation to let people know about ‘Hoovey’ and that we only sell the movie at premiers. They aren’t actually on the market. This is going to go on until the end of April, and in May if we have built up enough momentum will make the decision on either sending it to Starplex or AMC and those types of theaters. Depending on what cities are successful with this style of churches and schools, we will send it to the theaters of those areas.”

It’s a different approach, but one Elliott and EchoLight are confident will be effective, mostly because they believe so deeply in the quality of the film.

“Actually watching the movie, I can see it becoming the next ‘Rudy’ or ‘Hoosiers’ because it has that type of quality to it,” Elliott said.

While even Elliott knows that’s a lofty goal for a film not yet officially slated for a nationwide release, the hope is that people enjoy and connect with it the same way they have with those other inspirational sports movies. The tone and feel are admittedly very similar. The message at the heart of it all is just as moving.

Ultimately, though, Elliott wants to connect with people, not just through his story but personally. If all goes well, this will lead to much bigger things for the Country Insurance agent from Normal, IL.

“The place where I see this going is basically me going around to all the schools sharing my testimony with junior high and high school kids,” he said. “I would like for this to be able to create some kind of sports camp maybe for junior high kids. I want them to get out there to play baseball and basketball and football and play with them. I want to have a sports camp where I can influence them not only with sportsmanship but on never giving up and pursuing their dreams. And I want to start that sort of camp whether it’s joining up with the Fellowship of Christian Athletes or some type of camp like that.

“That’s what I’d like to do going forward. I don’t want this to end.”

Every great story does end, of course, but this one looks as if it’s just beginning for a man just looking to inspire and motivate people.

Whatever else happens, Elliott has really enjoyed the ride.

“It’s kind of funny because, looking back, I was just pursuing a dream to play college basketball,” he said. “I never thought that all of this was going to be become a movie or book. I didn’t have any of those intentions, so it’s funny that I’m here because I pursued a dream. I never gave up, and while it doesn’t feel like I’m worthy of being here, I know God had a story to share and I’m happy to play a part in it.”

Everybody loves a good sports movie, and “Hoovey” is precisely that. View the film’s official website to track down showtimes and locations, because everybody needs a little inspiration once in a while.