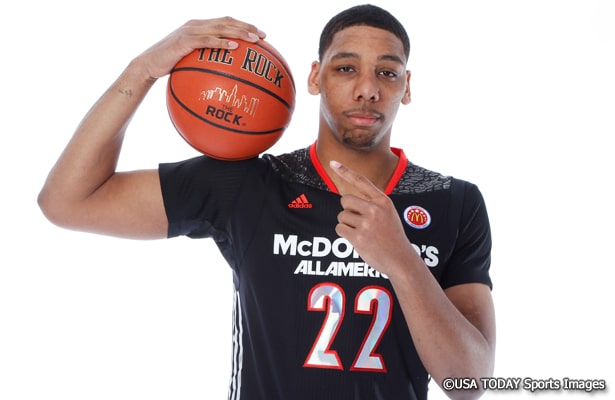 Centers are an endangered species in today’s NBA. You can count the number of superstar centers on one hand, which is one reason why the NBA recently eliminated the center position from the All-Star ballot in exchange for an undefined frontcourt spot. With small ball and hybrid big men gaining popularity, traditional centers are extremely hard to come by these days. The big man era is quickly becoming a distant memory and the next wave of NBA stars consists primarily of guards and forwards.

That’s why Jahlil Okafor is such an intriguing player. It’s been quite awhile since the NBA could get excited about a traditional center prospect. However, Okafor has the potential to not only be one of the best centers in the NBA, but one of the league’s best players overall.

Talent evaluators have already fallen in love with the 17-year-old, praising his game and versatility. Unlike most one-dimensional young centers, Okafor is capable of dominating a game in a variety of ways. On one hand, he’s extremely athletic and powerful, as evidenced by the fact that he has broken two rims in his high school career. On the other hand, he has some of the best footwork and post moves of any prospect in recent memory. He can dunk on multiple defenders or score using fundamentals. Okafor is truly the complete package, which is why there’s so much buzz surrounding him.

Okafor is currently a junior at Whitney Young High School in Chicago. He led the Dolphins to the city title this year and was named the Chicago Sun-Times Player of the Year over fellow five-star prospect Jabari Parker. He is considered the top overall recruit in the class of 2014 by nearly every ranking service.

Okafor is projected to be the top pick in the 2015 NBA Draft, assuming he leaves college after one year. If Okafor realizes his full potential, he could be a franchise-changing player who has a very long and successful NBA career.

“That’s my goal,” Okafor told Basketball Insiders.”I want to be the premier big man in the league and be extremely dominant on the offensive end and on the defensive end. That’s something that I’m doing right now. Hopefully I’ll be able to continue that in college and, if I’m fortunate enough, in the NBA.”

Growing up, Okafor always towered over his peers. As a seventh grader, he was 6’5. As an eighth grader, he was 6’7. He has grown steadily over the years and currently stands at 6’11. While Okafor puts in extensive work with trainers and has a jump roping regimen to perfect his footwork and mobility, he also feels that his slow-but-steady growth has helped those aspects of his game.

With that said, Okafor isn’t done growing. He’ll likely grow another few inches over the next several years. When Okafor was in eighth grade, he had an x-ray to predict his adult height. Doctors examined and analyzed his bone and told him that he’ll likely grow to 7’2 or 7’3.

Okafor was born in 1995 so he didn’t have the opportunity to experience the NBA’s big man era firsthand. However, he does watch film of those legendary centers and models his game after theirs.

“The NBA players that I love to watch the most are pretty much old-school players since I’m a big man,” Okafor said. “I watch players from the big man era. I love watching Hakeem Olajuwon, Tim Duncan and Shaquille O’Neal. Those are the three guys that are really my role models for basketball. I’m just trying to take a lot of the stuff that they did and put some of that stuff into my game.”

Okafor first realized that college and professional basketball would likely be in his future three years ago, when he was invited to participate in the Freshman All-American Camp just outside of Atlanta.

“My whole life it has always been my dream and my goal, but in eighth grade I went to the Freshman All-American Camp and I was recognized as the top big man,” Okafor said. “All of the top freshmen were there and that’s when I realized that I had a chance to be one of the best. It became more of a reality to me. I was actually convinced that I could do it.”

Since attending that camp, Okafor has continued to separate himself from his peers and solidify himself as one of the nation’s top prospects. He doesn’t remember the last time he faced man-to-man defense (“It’s been awhile,” he said with a laugh) because he’s usually facing double or triple teams. He’s the most talented player in virtually every game, to the point that he can toy with the lesser competition.

“It’s a lot of fun, especially with me being so competitive and loving the game of basketball so much,” Okafor said of being able to dominate on a nightly basis. “It always feels good when you walk off the court and feel like you were definitely the most dominant player on the floor. That’s my goal every night, to be the most dominant player on both ends of the floor.”

Even though Okafor is becoming a household name at 17, he hasn’t let it change him.

“Everything around me is the same,” Okafor said. “I still have the same core people around me. When AAU started, that’s when I started to realize the difference. I would go to these tournaments and all of these kids would want autographs or things like that. Or when I would go out of town with my high school team, I would see a lot of kids who want autographs. Other than that, everything else is pretty much the same. My family is keeping me grounded and all of that good stuff. It feels the same actually.”

Nearly every top college program has made Okafor an offer including Kentucky, Duke, Michigan State, North Carolina, Connecticut, Georgetown, Arizona, UCLA, Kansas, Florida, Florida State and Ohio State among others. Once his junior season ends, he’ll weigh all of his options and schedule his visits.

“I’m going to do that after my high school season,” Okafor said. “I’m going to sit down with my family, discuss it with them and trim down my list.”

While he’s not ready to narrow down his list of schools just yet, he did say that he has enjoyed the recruiting process. Coaches are reaching out to him on a daily basis to express interest and offer advice.

Before playing at the next level, Okafor wants to improve his conditioning and defense.

That’s something that I have improved on this year. That was something my coach wanted me to work on and he said I’ve been doing a great job. But I’m just going to continue working on those two things right now.

“It’s getting easier. I’m starting to realize what helps me. Some big things I’ve changed from when I was younger are the things that I eat and the work that I do other than skill work. I watch some of the old videos that my dad has and I just see how less athletic I was and how much slower I was. I wish I would’ve done those things sooner, but now I realize that the more conditioned I am, the easier the game is for me.”

Many people in NBA circles believe that Okafor could play in the NBA now, even though he’s only a teenager and still a work in progress. It’s not that crazy when you consider Okafor’s well-rounded game.

A player as athletic, skilled and smart as Okafor would likely be able to find a way to contribute to an NBA team, right?

“The only downside to Okafor is his age because he can’t play in the NBA right now,” one talent evaluator said.

For what it’s worth, Okafor believes he could make it as a 17-year-old pro.

“I would like to think that,” Okafor said when asked if he could play in the NBA right now. “I’ve actually had the [opportunity] to play against a professional basketball player. I played against Enes Kanter. He came to my school over the summer and I actually dominated him. Then, I found out that he had been the number three draft pick. I spoke with his trainer and he was like, ‘You dominated my kid,’ and he was telling me how he thinks I’m going to be special and stuff like that. I’ve heard from a couple college coaches that think I could be productive at the NBA level [right now], but it’s so hard for me to tell since I’ve never experienced a game at the NBA level or at NBA speed.”

If all goes as planned, Okafor will be able to experience an NBA game in the very near future. He’ll likely follow in the footsteps of his distant cousin – Emeka Okafor – and become a top draft pick. Okafor can’t wait for that moment to come, the moment when all of his hard work will have paid off. The scene has played out in his head many times. His name will be called, his family will be thrilled and his dream will be reality.

“That would be amazing,” Okafor said. “That’s been my goal since I was a kid. For me to hear the commissioner call my name, it’s going to be an amazing feeling. I always imagine putting on that hat of whatever team that I go to and seeing how happy my family will be. That’ll mean the world to me.”