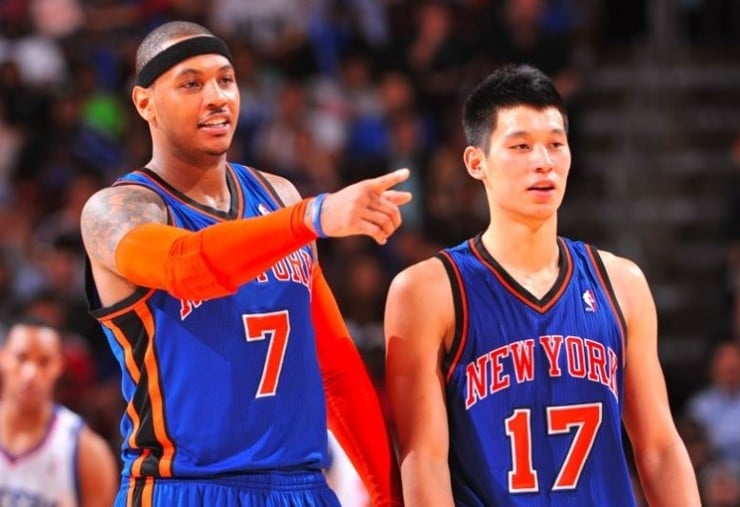 Jeremy Lin was once a teammate of Carmelo Anthony on the New York Knicks in the 2011-12 season. For those die-hard Knicks fans that remember, Lin dominated. He averaged 14.6 points, 3.1 rebounds, 6.2 assists, and 1.6 steals per game.

Naturally, fans still wonder if Lin’s departure had something to do with Anthony’s jealousy that season. Of course, Anthony played with New York until the team traded him to the Oklahoma City Thunder in 2017.

Per multiple NBA betting sites, the Knicks have bottom-15 odds of winning the championship in the 2022-23 season. But some sportsbooks are expecting them to make the playoffs in 2023. Compare the odds.

Jeremy Lin on whether Carmelo Anthony’s jealousy pushed him out of New York. pic.twitter.com/420V8uBz5y

On Wednesday, Lin was asked by The Daily Beast on whether or not Anthony’s jealousy led to the Knicks’ refusal to offer the Taiwanese-American star a multi-year contract.

“I mean, I think that’s — that’s the theory, and that’s what everyone says, but I can’t feed the speculation train because I don’t actually know,” explained Lin.

Following the 2011-12 season, Lin signed as a free agent with the Houston Rockets.

“I know, and I’m saying this truthfully, that there were multiple points of opposition completely outside of Melo within what was going on, and once D’Antoni resigned, there was already opposition within the organization — whether it was the coaching staff that took over or certain members of the front office,” continued Lin.

“But there was definitely, from what I’ve heard or gathered in the few years after, it wasn’t all as rosy as people thought it was. I don’t know who to attribute it to, but I know there were multiple points of opposition.”

Anthony went on to play his next five seasons with New York. While Lin might mention the coaching staff or specific Knicks executives, it appears Anthony was the common denominator. It’s quite a shame.

In one interview with Marc Berman of The New York Post in 2016, retired Knicks star Amar’e Stoudmire was asked about the situation. “If [Lin] stayed, it would’ve been cool,” said Stoudmire. “But everyone wasn’t a fan of him being a new star. So he didn’t stay long.”

After the Knicks lost in five games against the Miami Heat in the first round of the 2012 NBA Playoffs, the team’s only other playoff appearance over the next eight seasons came during the following 2012-13 season.

Perhaps the Knicks were concerned about Lin’s health. In the ensuring seasons beyond 2016, Lin struggled to remain on the court due to injuries.

Despite injuries, his performance remained consistent throughout most of his nine-year NBA career. Lin went on to win a ring with the Toronto Raptors in the 2019 NBA Finals.