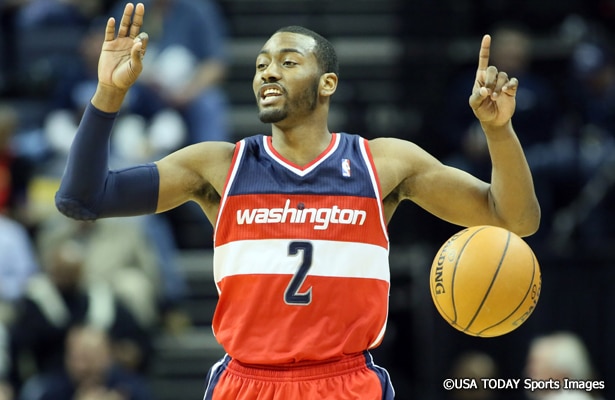 “What do you think about the league implementing a four-point shot? Do you think that would be a good idea?”

“If you could choose any two teammates for a three-on-three competition, one from this era and one from the past, who would it be?”

Among the sea of media and alongside some of the Eastern Conference’s other giants—LeBron James, Dwyane Wade, Carmelo Anthony and Paul George, to name a few—John Wall answered some of the most interesting questions he has had to field since his professional career began back in 2010.

But hey, as an All-Star, in New Orleans, it comes with the territory. And if the first half of his 2013-14 NBA season is an indication, Wall should get used to taking part in the NBA’s midseason classic.

“This is a big honor for me, especially for the city of D.C. and my organization and coaches and teammates and fans,” Wall said.

For Wall, though, the true test is how he and his Washington Wizards fare in the second half of this season.

“After this is over, the second half of the season is going to be an even bigger start for me, to try to finish the season the way I started,” Wall said. “You try to reach higher levels.”

Thus far, he has done quite well for himself.

Wasted talent is an atrocity, and that is why the stories of the likes of Eddy Curry, Darko Milicic and even Andrew Bynum reverberate within NBA front offices and among fan bases. In the NBA, young players are drafted and even sometimes given eight-figure annual salaries based on the mere possibility that they may one day become an NBA superstar.

Wall fits the bill, but unlike many of his predecessors, his game has taken an appreciable step forward. His reward is that he has been anointed an Eastern Conference All-Star for the first time, and deservedly so.

Now, as he shares the stage with other greats such as Chris Paul and Tony Parker and other budding stars such as Damian Lillard, Stephen Curry and Kyrie Irving, Wall believes that the sky is the limit in his quest to become one of the league’s premier point guards.

On this weekend, Wall has rubbed shoulders with some of the greats and he expects to bring something back home to D.C. with him.

“I think we’re definitely doing a great job of looking up to the older guys in this league and what they have done in the past,” Wall said when asked about following the career trajectory of some of his fellow All-Stars like Kobe Bryant and Chris Paul. “It’s a tough thing to reach what those guys have done, but it takes a lot of hard work and time and dedication.”

He seems up to the challenge, though.

“I think I’m trying to take the right steps in the right direction and the main thing I said was me improving my game as a player, for one, and my team just trying to win games,” Wall said. “That’s the biggest thing is us winning and that’s how you get known in this league.”

At just 23 years old, Wall is certainly on his way.

As a player, this season, he has shown a more refined ability to manage a game and find good offensive opportunities both for himself and his teammates. He was always adept at playing a breakneck pace and creating in transition, but his ability to read and react to defenses while playing a slower, more meticulous game is something everyone has noticed. Although the Wizards entered the All-Star break at 25-27, they are comfortably in the East’s playoff picture as the sixth seed and trail the third-seed Toronto Raptors by just three games.

In Washington, D.C., Wall is leading a revival and has his sights set on leading the Wizards to their first playoff appearance since Gilbert Arenas, Antawn Jamison and Caron Butler were roaming their sidelines back in 2008.

That, above all, is why he has received special recognition from the Eastern Conference coaches, and his team’s collective success is why he has become an All-Star.

Coming into this season, Wall had immense expectations to fulfill. When Ernie Grunfeld made him the first overall pick in the 2010 draft, it was Wall’s freakish athleticism and raw point guard instincts that enamored the Wizards. Even after winning an average of just 24 games over the course of Wall’s first three years in the league, and even after Wall was sidelined for 33 games during the 2012-13 season, the Wizards opted to forgo making him a restricted free agent in July 2014 and opted to sign him to a maximum extension.

The belief was that Wall was a cornerstone, and if this season has been an indication of what is to come, that belief seems true. And as the young professional’s progression continues, he hopes to lead the Wizards to brighter days.

It seems like so long ago that some wondered whether Wall was overrated and if his Wizards were destined to be a perennial disappointment. At least for now, those questions have ceased. At the very least, we now know that Wall is a student of the game and a young point guard who not only wants to get better, but can get better.

“I think me just studying a lot of film and just changing pace into my game,” Wall said when asked what he has done differently to help the Wizards succeed this season. “Late in the game, [coach] coming to me and me being slower and being able to score in a half court set, I’m able to find my teammates and doing a better job of running my team.”

What shall be interesting to witness is how Wall runs the Eastern Conference All-Star team when he is inserted alongside the likes of James, Anthony, Wade, George, Joe Johnson, Chris Bosh and Roy Hibbert.

He has emerged as one of the future stars of the NBA, and New Orleans, for him, is an early indication of his personal success.

“I definitely think [the NBA] is going in the right direction,” Wall, one of six players making their first All-Star appearance this season said in New Orleans.

And to the credit of Wall, his general manager Grunfeld and the organization, the Wizards seem to finally be going in the right direction, too.