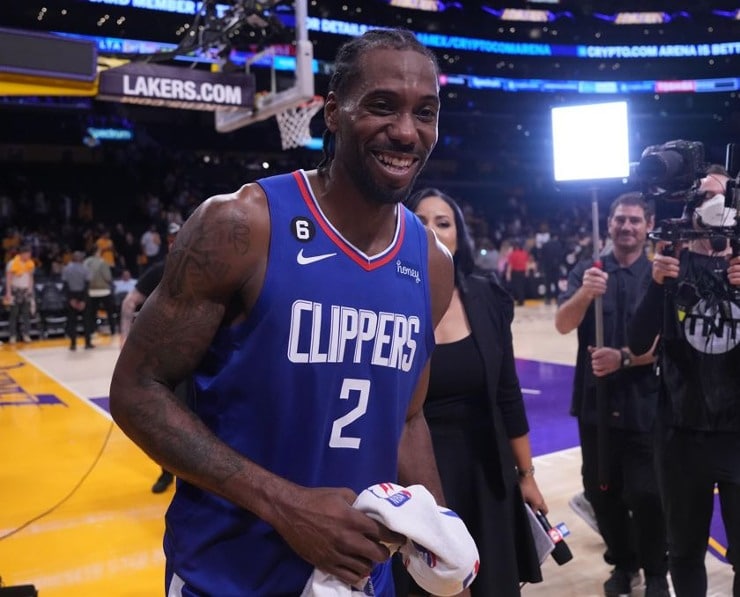 Los Angeles Clippers forward Kawhi Leonard came off the bench during the second quarter of his team’s 103-97 win over the Los Angeles Lakers on Thursday night.

Instead of complaining about his load management, the five-time All-Star is grateful to finally play with his teammates again. In 21 minutes, Leonard finished his performance with 14 points, 7 rebounds, 2 assists, and 1 steal.

“I waited 82 games last year, so I didn’t think 15 minutes would be that long,” said Leonard. “This is how I started my career. Act like I was in foul trouble and once I check in the second quarter, it’s time to play basketball.”

A couple of NBA betting sites are showing top-3 odds for the Clippers to win the championship in 2023. Plus, some sportsbooks are anticipating an NBA Finals appearance this season.

Reporter: “What was it like coming in mid-2nd quarter?”

Kawhi Leonard: “I waited 82 games last year, so I didn’t think 15 minutes would be that long. This is how I started my career. Act like I was in foul trouble & once I check in the 2nd quarter, it’s time to play basketball.” pic.twitter.com/ESFshd7hDv

Yesterday, the San Diego State product appeared in his first game since the Clippers’ second-round series against the Utah Jazz of the 2021 NBA Playoffs.

Needless to say, he missed all of last season due to an ACL injury. Thursday afternoon, the Clippers announced that head coach Tyronn Lue would consider managing Leonard’s minutes. As a result, the two-time NBA champ is now coming off the bench.

Kawhi Leonard is fine with coming off the bench with the Clippers, excited to play basketball again

He then received his fifth All-Star selection and third All-NBA First-Team selection. Based on Leonard’s career statistics, the forward is more successful offensively as a starter.

In the 2021-22 season, the Clippers finished 42-40 (.512) and eighth overall in the Western Conference standings. They lost to the Minnesota Timberwolves and New Orleans Pelicans in the play-in tournament.

Quite a few sportsbooks are giving the Clippers a projected win total of 52.5 games for the 2022-23 season. If John Wall, Paul George, and Kawhi Leonard can stay healthy, this could be their championship season.

In August 2021, after Leonard decided to opt out of the final year of his original contract, the forward re-signed with the Clippers on a four-year, $176.3 million contract.

Moving forward, as long as the Clippers win with Kawhi Leonard out of the starting lineup, this change benefits the Western Conference contender. Sacrifices have to be made for the better of the team.