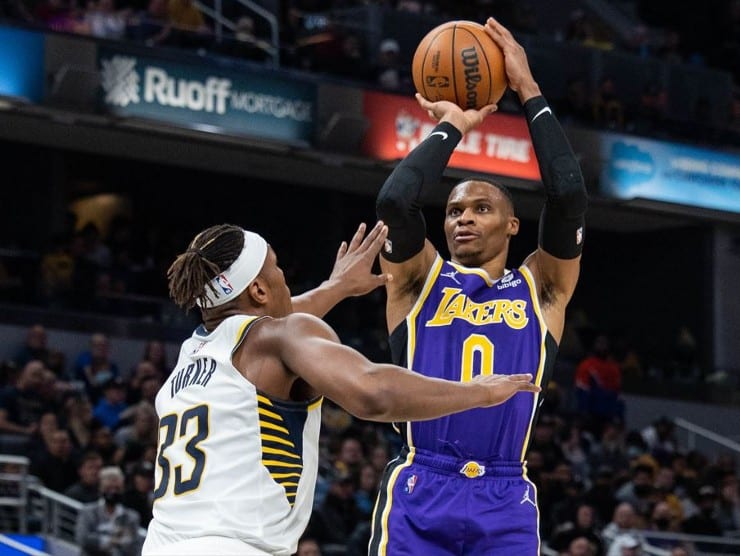 The Los Angeles Lakers are expected to target Kyrie Irving, Jerami Grant, Myles Turner, and Andrew Wiggins in the summertime of 2023. This news comes from an unnamed Western Conference executive — originally interviewed by Heavy Sports.

“No matter what [the Lakers] do with trades or however they reconstruct this year, they are going to keep an eye on next summer. That is where they have a lot invested, being able to get another star-type player next summer,” the unknown source told the media outlet.

All four players are entering the final year of their deals. Which of these stars would boost the Lakers’ championship odds? For the 2022-23 season, some NBA betting sites are giving them top-10 odds of winning another title.

The Lakers were prepared to include their 2027 and 2029 first-round picks in a deal for Kyrie Irving or Donovan Mitchell, per @mcten on Brian Windhorst & The Hoop Collective Podcast pic.twitter.com/77FKVu9xlh

“They’re going to look at Kyrie Irving, of course, but he is probably not their top choice,” continued the NBA executive. Of course, the Lakers offered their 2027 and 2029 first-round draft picks for Irving or Donovan Mitchell.

“They will look at Jerami Grant, who they liked for a long time, same with Myles Turner. I think Andrew Wiggins would be a big prize there because he can play two-ways.”

Now, Grant might decide to sign a multi-year deal with the Trail Blazers. This is assuming G.M. Joe Cronin is interested in retaining the eight-year veteran wing. He’s set to earn $29.955 million with Portland for the 2022-23 season.

Meanwhile, Indiana Pacers center Myles Turner could also explore the open market next summer. With the Lakers, LeBron James and Anthony Davis could use his size to protect the paint. The 26-year-old is due $18 million for the upcoming season.

Things change with each passing NBA season. So, take this news with a grain of salt. If the Lakers have another disappointing season, maybe G.M. Rob Pelinka could work out a deal to send Russell Westbrook to the Nets for Kyrie Irving.