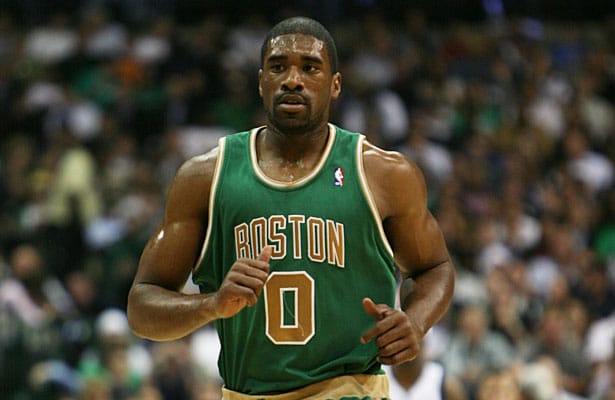 He sat courtside, legs barely fitting within the boundaries of the baseline and eyes glued to the game being played on the parquet where he helped win a championship. The banner hanging in the rafters above served as a reminder.

The visions of falling confetti flashed into his mind. He imagined the sights and sounds of triumph, the loud bellows of celebration from his teammates and the raw emotions of attaining the ultimate goal. It happened six seasons ago, but it might as well have been yesterday.

Leon Powe returned to TD Garden last weekend for the first time in three years. He had taken on many roles there since 2007, first as a Boston Celtic, then a member of the opposing team, and this time – most dramatically different – a former NBA player.

“I almost ran out on the court a couple times,” Powe told Basketball Insiders. “I almost did, but I forgot I wasn’t under contract so I wasn’t covered (laughs). It [brought] back memories, the competitive spirit in me. Then seeing [Rajon] Rondo, that was one of my guys from back in the day. I wanted to go out there and help him.”

In the grand scheme of things, Powe’s time in Boston was short. He played three seasons for the Celtics in a reserve role, averaging 6.6 points and 4.2 rebounds in 14.6 minutes, in an era dominated by Paul Pierce, Kevin Garnett and Ray Allen. He was plagued by knee problems, including multiple ACL injuries, and when free agency rolled around in 2009 he signed with the Cleveland Cavaliers.

Powe had departed by the time the Celtics made another NBA Finals push in 2010, and was out of the NBA when they entered the rebuilding phase this season. He was one of many players who had come and gone through the storied franchise.

At least, that’s how it looks on paper.

The thing is, it’s a different case for Powe and many members of that championship team. Regardless if they played three months or three years in Boston, they are just as beloved in the city in 2014 as they were in 2008. There was no role too small for Celtics fans, many of whom can still name every player on the roster from Rajon Rondo down to Gabe Pruitt.

Powe won over the fans with his gritty determination, that leave-it-all-on-the-court-because-you-don’t-know-which-game-will-be-your-last mentality that ran through the entire squad. He scored 21 points in 15 minutes off the bench in the Celtics’ Game 2 victory over the Los Angeles Lakers in the 2008 NBA Finals (leading to Phil Jackson’s memorable mispronunciation “Pow”), and the image of Garnett hovering over him screaming in that intense KG-kind-of-approval is still talked about to this day.

The reason for Powe’s recent visit to Boston was fitting. He was selected to participate in the Boston Red Sox’s opening day pregame ceremony that included a representative from each of the city’s recent championship teams. That day, his name was trending on Twitter. Many questioned why this bench player was chosen; others who had followed the team closely knew exactly why he was a good choice.

Following the Red Sox’s afternoon game, Powe made his way to TD Garden. He got there hours before tip off, leaving plenty of time to catch up with team personnel and the familiar faces still around after last offseason’s overhaul. Fans, even those who looked too young to have stayed up late to watch the Finals at the time, flocked to him for autographs. To them, he wasn’t a guy who came off the bench years ago. He was someone who helped the Celtics win a title.

Inside the Celtics locker room, Powe talked to Rondo, the lone remaining player from 2008. They exchanged conversation in the same four walls they had entered together as rookies in 2006, prepared for battle in deep playoff runs and celebrated a championship in a chaotic frenzy of jubilation. The two have kept in touch over the years, especially when Rondo suffered an ACL injury last season.

“I talked to him when he hurt his knee,” Powe said. “I was checking up on him. I still keep in touch with his family, we’re still cool. I wanted to make sure he was alright and wasn’t going to rush back into something. I told him to take your time, but make sure you’re okay.”

Powe has reached a point in his life where making sure he himself is okay is a priority, not just for the present time but for the future. The last time he competed at an NBA level was during the 2012 Summer League as a member of the Chicago Bulls, following a stint in Puerto Rico. He struggled, and the effects of all the injuries he had sustained over the years were visible on the court. At 28 years old, his career came to a close.

“I really wasn’t jumping the way I wanted to jump. I wasn’t really moving like I used to move,” Powe said. “Therefore, some of the things that I used to do I can’t do anymore because of the injuries I had.

“I wanted to make sure my knees were good, because you can feel good but you’ve got to know what’s going on inside. That’s what I told myself because I want to walk when I’m a little older, 40, 50. … I talked to my agent and a couple members of my family. They said if your knee is not feeling 100 percent and you feel like there’s something wrong, you don’t want to just keep getting surgeries and surgeries to go play.

“[The hardest part is] watching, knowing what you used to do and knowing what you can do. But knowing if you do so much of it, your knee is probably going to hurt. I just don’t want to take that risk right now.”

And so he moved on, beginning the next chapter in a life that could span hundreds of pages after only 30 years. By the time Powe reached the NBA, he had encountered extreme obstacles that could have sidelined a person from achieving their dreams. Instead, he hurdled over them to reach the league. Powe grew up in Oakland. His father walked out when he was a young child and his mother passed away when he was in high school. He spent his childhood in various homeless shelters and foster homes at times, eventually assuming a responsibility for his younger siblings. He had faced adversity head on many times in his past, and the of end his NBA career was not going to slow him down.

Powe resides in California where he is focused on several business ventures, including an entertainment company. He’s trying to form an investment group in hopes of buying an NBA team. He is committed to his siblings “helping out, doing what I need to do,” he explained, staying true to those who were there before basketball and are still there.

He credits the NBA for teaching him about hard work, giving him the opportunity to get to know people he wouldn’t have met otherwise, and equipping him with tools for the professional world. Even though he knows leaving the game was the best decision for him, it was still hard at times to be that close to the action.

Powe stood out from the crowd as he watched the Celtics lose to the Philadelphia 76ers last week. Not because at 6’8 he towered over nearly everyone else in their seats, but because he was treated by fans like a champion, one who had helped bring victory back to city that still appreciates his efforts.