One of the biggest surprises early in the 2015-16 NBA preseason has been the play of Milwaukee Bucks rookie Rashad Vaughn. The shooting guard was just 18 years old when the Bucks selected him with the No. 17 pick in the 2015 NBA Draft, and he’s the second-youngest player in the NBA this season (behind only Phoenix Suns shooting guard Devin Booker, who is just two months younger). 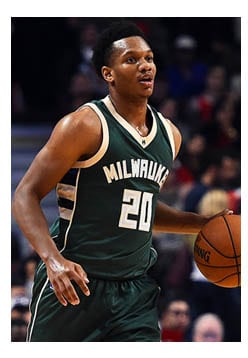 The UNLV product was born in 1996, meaning he wasn’t alive to witness the first three years of his head coach Jason Kidd’s NBA playing career.

Because he is so young, it was expected that Vaughn would need some time to develop before making significant contributions for Milwaukee. However, Vaughn has gotten off to a very impressive start to his NBA career.

Through the Bucks’ first three games, he was the team’s leading scorer (averaging 16.6 points while shooting 51.2 percent from the field and 43.8 percent from three-point range). He came back down to earth a bit in their fourth game, a six-point outing against the Washington Wizards in which he only played 18 minutes, but his flashes of brilliance have Bucks fans optimistic.

Vaughn exudes confidence on the court, and you’d never know he’s a teenager from watching him play. He’s also an incredibly hard worker, which is one reason he believes he’s been able to make an impact right away.

“I think it’s just because I’ve been working so hard ever since I got drafted,” Vaughn told Basketball Insiders. “I’ve been in the gym every single day. I’m constantly watching film. I watch a lot of different two-guards, looking for things in their game that I want to work on. I watch a lot of Bradley Beal, Kobe Bryant, Klay Thompson and older clips of Ray Allen. I try to study a lot of different two-guards and take little things and moves from each of them.

“Basketball is everything to me. I wake up and it’s nothing but basketball. I love it. Basketball is my life and I’m focused on it every day. I think the more I do that every single day, I should just continue to get better and better. I’m feeling pretty confident right now. The more I go out there to play games and go out there to practice, my confidence just builds up. It’s increasing every time I step out on the floor.”

After Vaughn dropped 20 points in his preseason debut against the Chicago Bulls – hitting 8-14 shots from the field and 3-6 from long range – Coach Kidd raved about his maturity and poise.

“He plays with a great demeanor,” Kidd said. “He doesn’t get up too high and doesn’t get too down in the things that he’s done. He is showing that he deserves time to play and he’ll get it. … At 19 years old, he’s very mature. He acts a lot older on the court and off the court.”

Vaughn says he and Kidd haven’t specifically discussed what role he’ll have with the Bucks this season, but the rookie is steadily figuring out what his head coach wants from him and how he can carve out a role in the rotation.

“I’m just trying to come in, learn as much as possible and play hard,” Vaughn said. “With Coach Kidd, that’s all he wants. He wants everyone to play hard. He doesn’t care who shoots the ball or anything like that. Our whole team is really unselfish actually, because nobody cares who shoots the ball. The focus is just on playing hard and winning games. That’s all that really matters.”

Each time Vaughn takes the floor for the Bucks, he is looking more and more like a draft steal. During the NBA Summer League in Las Vegas, he scored in double-figures in every game and finished the event with averages of 17.2 points, 3.2 rebounds and one block in 29.7 minutes. While it’s still very early and hard to say how these exhibition performances will translate to the regular season, these are excellent signs of what the future may hold for the 19-year-old.

Which begs the question: how was such a talented, young player still on the board when the Bucks were picking at No. 17? The main reason Vaughn didn’t go higher was because his lone collegiate season at UNLV came to an abrupt end after just 23 games when he sustained a torn meniscus in his left knee. Prior to the injury, Vaughn had been one of the most impressive freshmen in the country, leading his team in scoring with 17.8 points per game and seeming like a probable lottery pick. Fortunately for Vaughn, he was able to get healthy in time for the pre-draft process, which allowed him to work out for teams and help his stock.

Vaughn started the summer working out at Impact Basketball in Las Vegas, where trainer Joe Abunassar was blown away by the teenager’s intensity and work ethic.

“Rashad has always had a mature focus and has worked like a veteran,” Abunassar said. “He’s a gym rat who loves putting the work in, and he understands what it takes to be great.”

And make no mistake, Vaughn is determined to be great. He thinks, if everything goes according to plan, he can eventually be a star in this league.

“Definitely, that’s the goal for me,” Vaughn said. “That’s why I work so hard. I’m trying to win games and hopefully be a star in this league. … I’m just going to stay focused, stay humble and keep trying to get better every day. I’ll do whatever it takes. I’m focused on doing all of the little things, mentally and physically, that it takes to win games and be successful.”

Initially, Vaughn was a bit frustrated that he slipped to pick No. 17 on draft night. However, now that some time has passed and he’s gotten to experience everything in Milwaukee, he thinks falling out of the lottery may have been the best thing that could’ve happened to him.

“I used it as motivation, but I’m glad to be where I’m at,” Vaughn said. “I think it was meant to be for me to come to Milwaukee. I wouldn’t [change anything] and I don’t really think about it too much. I think I’m in a great position, on a great team, with a great coaching staff and great vets. I couldn’t ask for anything more.

“It’s definitely fun to be a Buck right now. There’s nothing better than having this kind of support from the city. They have really embraced us and I’m glad to be on the team at this time. We’re getting a new facility, we’re coming off of a playoff appearance and we have a lot of great players. I’m here at a great time and it’s so fun to see the city supporting us like this. I’m just so excited.”

Having so many other young players on the roster has also helped Vaughn as he gets acclimated in the NBA. Sometimes, being a rookie can be intimidating – with limited opportunities and few players to relate with. However, Vaughn finds himself in a locker room surrounded by players near his age, which he loves.

“It has definitely helped me a lot; these guys are all like my big brothers,” Vaughn said of joining the young Bucks. “They have all taken me under their wings and really helped me. It’s fun too and we all vibe together. Like I said, I couldn’t ask for anything better than this. I really think I entered the perfect team, with the perfect organization. I’m just glad to be here.”

Vaughn falling to No. 17 seemed to work out perfectly for Milwaukee too, since the shooting guard is a perfect fit for their squad. Last year, two of the Bucks’ biggest weaknesses were their scoring and shooting. In the 2014-15 season, Milwaukee ranked 25th in offense (scoring just 100.5 points per 100 possessions) and 23rd in three-pointers made per game (6.6).

The Bucks still managed to win 41 games, which was a borderline miracle considering they won just 15 games the prior season, they lost No. 2 overall pick Jabari Parker to a torn ACL 25 games into the year, they overcame Larry Sanders’ shocking midseason retirement and they traded leading-scorer Brandon Knight in a February deal that brought in Michael Carter-Williams, Miles Plumlee and Tyler Ennis (forcing them to learn on the fly and adjust to a new team, coaching staff, city and more late in the season).

Coach Kidd deserves a lot of credit for Milwaukee’s surprising success. Despite all of the obstacles the team faced and their struggles on the offensive end, the team exceeded expectations because Kidd turned the young squad into the second-best defense in the NBA (allowing just 99.3 points per 100 possessions) and their size, length and versatility caused a lot mismatch problems for opposing teams.

However, even though they were successful, it was clear that the team needed a more well-rounded attack. Now, the offense is expected to improve after signing free agent Greg Monroe over the summer, adding Parker back in the lineup, drafting Vaughn in the first round and seeing their young core further their development (as well as get more comfortable under Coach Kidd in his second year at the helm).

As Vaughn looks at the pieces within the organization, he sees a legitimate East contender.

“Yeah, definitely, I think we have all of the pieces we need,” Vaughn said. “With the new additions and everyone who came back, we have a great team and great coaches. We’re definitely going to be a contender.”

While Vaughn has made an excellent first impression, he knows he still has a lot of work to do. For one, he needs to add some muscle since he weighs just over 200 lbs. in a league filled with physical specimens. He cited Bulls swingman Jimmy Butler as the toughest player he’s had to guard thus far, due to his toughness and two-way talent.

“I need to bulk up; that’s one of the first things I learned when I started playing against NBA players,” Vaughn said. These are all grown men and everybody is strong. I’ve been in the weight room every other day, just trying to get in there and get stronger.”

Still, the kid has already started to make his mark and earn respect from those around the NBA. Detroit Pistons head coach Stan Van Gundy recently praised Vaughn’s game and potential.

“The Vaughn kid put on a show in the fourth quarter, as he did in Chicago the other night,” Van Gundy said recently. “We’re going to be dealing with him for a long time in the league.”