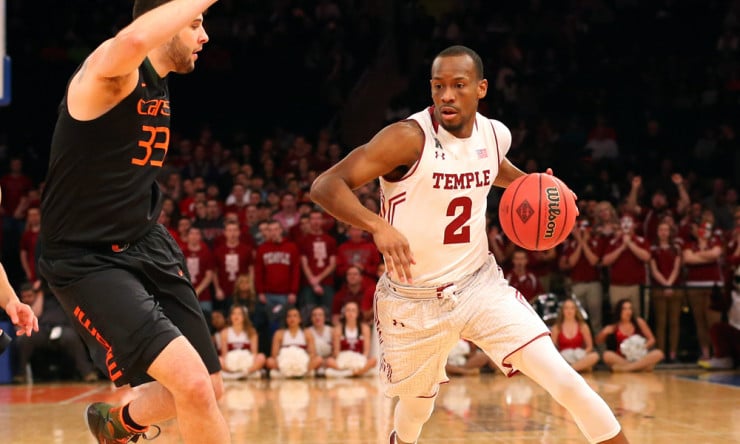 Performance technology is firmly entrenched as the next giant frontier for NBA front offices. Recent advances in wearable technology have vastly expanded the amount teams can know about every movement their players make, and the race is on behind the scenes to parse every asset at their disposal. Some front offices may hem and haw about the full benefits of things like analytics, but it’s much tougher to dispute the efficacy of methods that can keep players healthier and more productive from a medical standpoint.

On-court tracking, however, isn’t the only front on which teams can monitor their players. Typically less appreciated by the casual fan is the mental stress of NBA life; it’s easy to forget that these are often teenagers being thrown into a whirlwind experience, and managing the added pressure in conjunction with on-court performance isn’t as easy as some might assume.

That’s where someone like Jake Rauchbach comes in. Jake’s program, MindRight Pro, is designed specifically to identify and remove mental and emotional blockages in athletes to maximize their performance capacity. His concepts, energy psychology and acupuncture philosophy, have been utilized across the professional and college athletic ranks, including by franchises like the St. Louis Rams and Seattle Seahawks plus a wide range of collegiate programs spanning several sports.

MindRight Pro, created in 2012, has been primarily implemented at Temple University, where Rauchbach works as a graduate assistant under coach Fran Dunphy. Since its inception, the system has elicited glowing testimonials from a range of players and staff at Temple, including current Houston Rocket Will Cummings, Coach Dunphy and university orthopedic surgeon Dr. Milo Sewards.

No one can better explain the program than Rauchbach himself, though. Basketball Insiders caught up with him to learn more about a system just beginning to gain traction in the collegiate and professional ranks.

Can you give me a very broad explanation of what your program is?

Rauchbach: “What the MindRight Pro program does is combine acupuncture philosophy and energy psychology to identify and remove mental and emotional blocks, and consistently enhance player performance. The reason this program produces results fast is because it gets to the root of why an athlete is blocked. These blocks are held within the unconscious mind, or the energy systems of the body. So by identifying or removing these blocks from that system, players improve quickly and elevate performance across the long term… As far as I know, nobody else is combining energy psychology and acupuncture philosophy to actually elevate performance consistently. They’re not dealing with the unconscious mind to really get to the root of why guys are blocked. By actually getting to this root – by actually getting to the unconscious mind – you are unblocking these guys at a very core and deep level. The St. Louis Rams and the St. Louis Cardinals are using similar technology, but this program is different because it’s comprehensive. Essentially, what MindRight Pro does is provide a customized athlete program based upon player profiles, performance issues and athlete or coaching staff goals for that player.”

Let’s say I’m a player who wants to subscribe to your program. What’s my process?

Rauchbach: “First of all, you have to identify what the issue is – the performance issue. So being at the Temple program long enough, [I] know what a guy’s issue is. Whether it’s leadership, whether he plays well in practice but it doesn’t carry over to games, whatever that issue might be. Once that’s identified, what I do as a coach is go to the player and [say], ‘Look, this is how I can help you. This is what I’ve done with players in your position in the past, on the college and pro level. And this is how we’re going to get there.’ So from there, the most important thing is getting the athlete buy-in. If the athlete buys in 100 percent to what we’re doing, then I can help that athlete. From there I’m going to customize, usually a six-to-eight-week program combining input from the coaching staff, the player, and then my point of view as a performance coach to structure a program to help that athlete achieve the goal we’re trying to achieve for him. So for Will Cummings [at Temple] last year, from the beginning to the end of the program, one of our goals was to allow him to be a strong and vocal leader on the court at all times. It took six weeks to get there, but after that six weeks he was the unquestioned leader of [the] team, both on the court and in the locker room.”

Can you give me an example of things you did to specifically strengthen leadership confidence?

Rauchbach: “The main crux of this work is, you have to sift out the unconscious energetic blocks before the player can make a change – because if the player can make the change already [on their own], they would have consciously done that. These changes are made on an unconscious level. So by implementing the first element, which is off-court sessions to implement these energy psychology techniques, to go in and identify what these blocks are – past experiences of these players held on an unconscious level. And then through various mechanisms, clear this stuff out so that when the player gets on the court, the coaching staff can go in and coach them up on the focuses that we’re working on. So once [the player] is unblocked, it’s like the doors are open so he can move forward in that specific focus that we’re working on. There are [also] pre-game and in-game processes that Will learned last year, so that when things went awry for him, he was able to focus back in – not only for himself personally, but also as the leader of [his] team.”

What are some of the influences that you drew from in designing this program?

Rauchbach: “This program is very personal to me. It grew out of an organic process for me to heal as a kid – when I was a kid I experienced chronic disease and a number of physical and emotional issues. The byproduct of this disease was a [number] of emotional and physical performance blocks. I went to all different types of doctors and psychologists, traditional methods and means – it just didn’t help me. So I was really forced to find other ways to help me heal. Because of this, I went to holistic practitioners, Chinese medicine, different types of energy psychology practitioners, these sorts of people, to help me get over the ailments that I was dealing with.

Through the tools I learned, I began to create an organic process when I was a teenager. And then when I got back on the court, I already had a process to help me get over the issues I had dealt with, that any athlete deals with. So for instance, shooting slumps, pregame and in-game anxiety, not being focused, and actually dealing with physical injury. This program actually helps expedite injury recovery.

From there, once I got into coaching, I took the process that I knew how to apply from my own personal performance, and kind of turned it outwards on the players that I was coaching and applied my training… So it’s been a very personal journey for me, not just something I picked up. I’m very passionate about this, and I know 100 percent that it works.”

To play devil’s advocate, how do I know this isn’t a placebo effect? Is there more traditional medical backing to the program?

Rauchbach: “We received medical community validations from Dr. Milo Sewards, the team orthopedic surgeon for Temple University athletics. This helps to validate what I’ve known to work, and what many other practitioners have known to work. Energy psychology methods have proven efficacious in clinical treatment of anxiety, depression, phobias and PTSD. This is such cutting edge technology in sports that there is little research on the effects of [this kind of] performance enhancement across high-level sports. I’m building a case with the guys I’m working with, and testimonials from head coaches I’ve worked with both at Drexel and here at Temple, along with all the athletes I’ve worked with. The testimonials back the methodology of this program, because it’s worked and it’s helped them.

Additionally, we track everything throughout the program – so there’s a positive correlation between reduction in performance blocks and improvement in performance statistically. So we actively use basketball statistics, [along with] Temple basketball analytics we use within our internal program here to show that before, during and after the program, players are getting better based upon a reduction in performance blocks. I’m trying to build a case to illustrate [through] these testimonials of players and coaches, and the statistics – because the numbers don’t lie – that this stuff works and is on the cutting edge of performance technology.”

What about coaching? Do you think there are parts of the program that could be applicable to coaching, perhaps even at the NBA level?

Rauchbach: “No question. I think we all experience different types of performance blocks in whatever area of life we are performing in. This program can help coaches and their coaching staffs. Obviously coaching is a tough business – you deal with the stressors day in and day out of competition, and job security is always a big thing. And coaches also have to perform at a high level during practices and games, just as their players do. What this program does is help them connect with their players more easily, help them stay in the moment, and most importantly be on their games and be at their highest level of performance within their own coaching skill set – which will enable them to better be prepared to be successful with the team.”

You mentioned earlier that much of your success involved your proximity to the Temple program and how well you know these players. How might that theme transfer on a larger scale, like perhaps the NBA, with multiple clients?

Rauchbach: “Being on staff full time produces faster results, because its much easier to build trust and receive the buy-in needed to move forward with facilitating the player performance improvement. That’s the most important thing. The players have to buy in to you, and know that you care and are invested in them. Always being around and viewed as a basketball coach by the players is key and is the most ideal situation to apply this program.

Once they have that buy-in, they can actually do the work and help them improve. That being said, working as a consultant can also be effective – albeit it is more difficult. For me personally, getting a chance to build rapport with those players, getting buy-in from those players on a consultant basis can also prove equally effective. This a different way of looking at performance. This program is unique to me and the processes I’ve developed. So at some point, I do see this program having coaches that I’ve trained going out and helping different teams with their player performance issues, and potentially their coaching performance issues as well.”