Heading into the 2015 NBA Draft, the consensus was that Karl-Anthony Towns was the top prospect with Jahlil Okafor and D’Angelo Russell following closely behind. Throughout the pre-draft process, however, word began to circulate around NBA front offices that the draft seemed deeper than many initially thought.

Since then, we’ve seen the likes of Kristaps Porzingis, Justise Winslow, Cameron Payne and Kelly Oubre, Jr. among others seem to make an immediate impact. 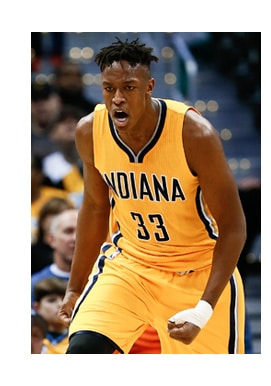 The promising Myles Turner hopes to join that list.

The Indiana Pacers rookie missed 21 games of action earlier this season after fracturing his left thumb in mid-November. A few games into his return, though, Turner is out to prove that he’s no slouch.

“It’s been up and down, especially missing that entire month,” Turner told Basketball Insiders. “You do learn a lot. You see the timing of things, you see where to be defensively, you see certain gaps you need to fill offensively.”

That learning seems to have helped him. In his 11th game since returning from injury, Turner posted a career-high 25 points against the Detroit Pistons on January 17. It was one game, and it was a loss, but after being selected with the 11th overall pick in last June’s draft, fans and front office members of the Pacers each hope it is indicative of what Turner can contribute on a consistent basis in the NBA.

“I hate sitting out there watching sometimes, especially sitting down and not being able to make an impact on the game,” Turner said. “But now that I’m back and my coach has some trust in me, we keep building that trust going forward.”

For Frank Vogel’s Pacers this season, going forward has been a recurring theme.

Still built around the capable talents of All-Star forward Paul George, the Pacers have slowly seen their core transform. Lance Stephenson, David West and Roy Hibbert are all elsewhere, and Turner joins a younger nucleus that hopes to surprise the other contenders in the Eastern Conference.

Staying ready, for that matter, was at the forefront of the rookie’s mind when he sat on the bench nursing his injuries. That, in part, has helped him return to the lineup and hit the ground running.

“It’s very important, you never know when your name is going to be called,” Turner said of staying ready. “You just have to always be ready to go out there and make an impact and I want to make sure I always come off the bench with some energy.”

Though his per-game averages are not as impressive as some of the aforementioned rookies, Turner’s promise and demeanor leave little to be desired. Standing at almost seven feet tall, he is versatile enough to fit in seamlessly with any number of lineups that Vogel trots out. He, along with Monta Ellis, Paul George and C.J. Miles help make the Pacers one of the more malleable teams in the Eastern Conference. To that end, it’s no surprise that they are entering the All-Star break with a legitimate shot at a top-four seed.

“It’s a huge mismatch, especially when you have slower bigs,” Turner said of the trouble that Indiana’s versatility often gives opposing teams. “Not every team is playing the spread five lineup now, but when you’ve got slower bigs, it’s tougher to match up with us, especially when we spread the floor like we can.

“All of our bigs can shoot and sometimes, we slide C.J. to the four… It’s a tough matchup for some teams.”

What is most scary about these Pacers, though, is that they are still very much a team in transition. Like the Los Angeles Clippers and their nine new faces, the Pacers have a very different look this year. However, they are a team built around a talented star player and a strong-willed head coach, which are two key components for being successful in the NBA. In many instances, it just takes time. And certainly, if you were to ask Coach Vogel about what will help his team be successful in the long run, he will undoubtedly mention defense.

Turner knows this and is trying to fit in with that defense-oriented approach.

“That’s been the DNA for the past few years from what I understand.” Turner said when asked about the team’s defensive intensity. “But I feel like we’re still trying to find our identity, sometimes.

“We have a lot of new players in the system. I’m not saying we are going through an identity crisis or anything like that, but we want to make sure we solidify ourselves a little bit.”

The Pacers enter play on January 18 at 22-19, holding the seventh seed in the Eastern Conference. While they’re in seventh place, the Pacers are just two games out of the third seed in the conference and should see their odds of climbing the standings improve after it was announced that Joakim Noah of the Chicago Bulls may miss the remainder of the season due to a shoulder injury.

Make no mistake, these Pacers are hungry and far from an easy win on any team’s schedule. Also, you would be wise to expect Turner to step in and immediately prove to be another threat.

Based on what we have seen so far, the promise and expectations thrust upon him are well-founded. Now that he’s healthy and has an opportunity to make an impact, the 19-year-old seems well on his way to cementing himself as a key cog in Vogel’s rotation.

If things break right, Turner may end up being even more than that. He could become a difference-making rookie, helping Paul George and Frank Vogel on a team not far removed from being a top contender in the Eastern Conference.

Three months from now, if the Pacers have secured a top-four seed in the Eastern Conference, we may look back at Turner’s return from injury as when the rookie truly helped to turn the tide.