The New York Knicks are currently 2-1, with wins over the Milwaukee Bucks and Washington Wizards – two teams that were expected to contend in the Eastern Conference. After an offseason in which many people laughed at the Knicks and criticized the organization for missing on marquee free agents, New York has stormed out of the gate and looks much better than last year’s squad that won an Eastern-Conference-worst 17 games.

After New York’s win over Washington on Saturday, All-Star point guard John Wall pointed out that the 2015-16 Knicks are playing much better this year in large part thanks to their new-look offense.

“They are not running the same offense as last year,” Wall said of the Knicks. “They added some more pace to their game, they run a lot more pick-and-rolls and put us in tough situations where we had to rotate and they were getting offensive rebounds and put-backs.” 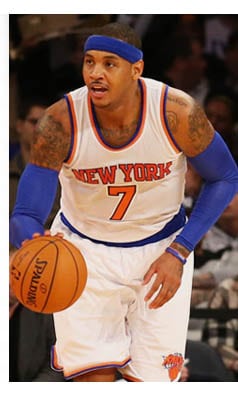 Another big difference is the play of Carmelo Anthony, who’s back to full strength after spending much of last year banged up before a season-ending knee surgery ended his campaign after 40 games. However, this year, Anthony looks like himself and has been effective scoring the ball.

On the season, the 31-year-old forward has averaged 24.3 points, 6.7 rebounds, four assists and 1.3 steals. While his shooting percentages could use a boost, his percentages against the Wizards suggest that Anthony is getting more comfortable, forcing fewer shots and making a conscious effort to score within the flow of the Knicks’ offense.

Head coach Derek Fisher raved about Anthony’s recent scoring outburst as well as his ability to make his teammates better.

“He was really good,” Fisher said of Anthony. “There was a composure and a poise to everything that he did. He got the shots that he wanted when he wanted them. He also made plays to make other people better. I thought his effort on the defensive end was really great. He led us in a lot of areas tonight.”

“I felt good,” Anthony said. “It’s just one of those days where even this morning at shootaround, I was feeling good. I worked out a little bit after shootaround. Things felt good before the game, things felt good. It’s just one of those days, and I’m just trying to take it day by day. Today was a day that I had that bounce. … I’m never surprised, but I’ll take it. I’ve been putting in the work for a long time so it was just a matter [of time until it came]. It came right now and hopefully I can keep it up.”

If Anthony can keep this up or even remain close to this level of production – mimicking his success from the 2012-13 season, when he was the NBA’s scoring champion (averaging 27.8 points) and led the Knicks to 54 wins – New York could be a team that surprises people in the wide open Eastern Conference.

After Anthony’s 37-point performance, the reaction from various Wizards players seemed to be, “What could we do when a superstar like ‘Melo is knocking down shots like that?” After all, Washington played solid defense for much of the night and tried to throw different looks at Anthony, but everything they tried against the eight-time All-Star failed to contain him.

“Once he gets in a rhythm, he is hard to defend,” Otto Porter Jr. said of Anthony. “We were trying to get different guys on him and get him off the spot. What more can you do but contest? We tried to make somebody else make a play, [but it didn’t work].”

“We were just trying to make him uncomfortable as much as possible,” Bradley Beal said of Anthony. “We made him force shots, made him take some tough ones, but he was 11-for-18, which is still a pretty good percentage. He was just too comfortable.”

“We had one guy that made tough shots,” Wall said of Anthony. “I think we could have done a better job of not giving up too many second-chance points, but we were doing our job. When he got hot, he got hot. When he gets hot, he makes tough shots. I think we were competing, but he just made some tough shots and some good shots. These guys are professional athletes just like we are; they work on their game to make shots down the stretch.”

If Anthony can return to form as one of the league’s elite scorers, that would obviously be huge for New York.

However, he can’t carry the Knicks by himself. He’ll need help, and that’s where newly-acquired veterans like Robin Lopez, Arron Afflalo, Derrick Williams and Kyle O’Quinn will have to step up, along with first-round picks Kristaps Porzingis and Jerian Grant. That supporting cast has played well early, which is why there is some optimism surrounding this Knicks squad. 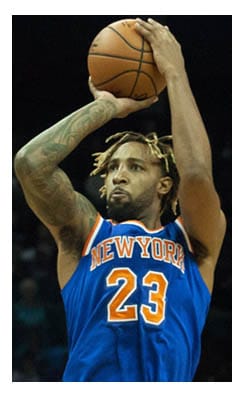 So far, the play of Williams has been the most pleasant surprise for the Knicks. The No. 2 overall pick in the 2011 NBA Draft is on his third team in five years and many had written him off as a bust who failed to live up to his hype.

However, New York liked the 24-year-old’s game and upside, inking him to a two-year deal worth $10 million last summer. Early on, he has rewarded their faith in him by playing some of the best basketball of his career and seems to be rejuvenated in the Big Apple.

Williams was terrific during the preseason and then picked up right where he left off during the Knicks’ season opener against Milwaukee, contributing 24 points in 21 minutes (on 8-17 shooting from the field) as well as seven rebounds. Not to mention, New York was a +20 when he was on the court. He came back down to earth a bit in the Knicks’ last two games, but he has continued to provide energy, put up respectable numbers (totaling 16 points, three rebounds and two steals) and make positive plays that don’t show up on the stat sheet.

The fact that the Knicks are winning has helped Williams with his transition to New York. After all, he is used to losing many games, having spent the early parts of his career with the Minnesota Timberwolves and Sacramento Kings. New York winning their first four preseason games and opening the regular season with two victories in three games has Williams and his teammates excited.

“It builds a lot of confidence and chemistry – that’s what you need,” Williams said. “You need wins. We’ve had some bad moments, but we [bring] it together. That’s what builds chemistry, getting out of holes and out of bad situations. Overall, we’ve played pretty well as a team.”

Williams has viewed his move to the Knicks as a positive change of scenery – a chance to prove that he’s not the draft bust he has been labeled throughout his first several years in the league. He knows that if he’s able to play well on this enormous stage, his critics will be silenced and his career will be just fine. When asked if this is a fresh start, Williams doesn’t hesitate to respond.

“Definitely,” Williams said. “When I met with Phil [Jackson], that’s all I needed, just that one meeting with him. He told me he wanted me on his team. That gives me a lot of confidence right there, when you have a team that really wants you and not necessarily just picks you.”

Williams is still getting acclimated to his new teammates, coaches, system and city among other things, but he says the adjustment hasn’t been too tough on him and he’s doing everything in his power to learn quickly and play to his full potential.

“It’s not difficult,” Williams said. “It’s just learning all the spots, just being out there on the court. Playing two to three different spots, that can take a toll on you. [I’m] just learning it, watching film. I think that’s the best way to learn.”

Coach Fisher has tried to get all of his new players on the same page in the early goings of the season. Looking back on last year’s dismal campaign – his first as an NBA head coach – Fisher believes a lot of the struggles and suffering that the team endured actually helped them prepare for this year.

“I think as difficult as last year was for us, a lot of what we are seeing this year still has to do with the foundation that was built during those difficulties last year,” Coach Fisher said. “The fact that we didn’t want to practice losing intentionally down the stretch of last season, and [instead we were] actually building a mindset that every time we step on the court and you wear a Knicks uniform, there is a certain way you are supposed to play.”

Slowly, that “Knicks way” has been put on display.

Their offense is almost unrecognizable. Last year, their offense ranked 29th in the NBA (scoring just 97.1 points per 100 possessions, behind only the dreadful Philadelphia 76ers) whereas this year they are ranked third in the NBA (scoring 107.4 points per 100 possessions, behind only the Oklahoma City Thunder and Golden State Warriors).

Meanwhile, the players have noticed little things that have led to New York’s improvement.

Lopez praises the team for communicating much more on defense lately and holding each other accountable when mistakes are made. Anthony is trying to be more efficient and play within the flow of the offense as he scores the ball. Meanwhile, newcomers like Lopez, Williams, Grant, Porzingis and O’Quinn have made a big difference as well. Soon, Afflalo will make his presence felt as well once he returns from a hamstring injury.

The Knicks may not be able to make the playoffs in the Eastern Conference, which is actually pretty competitive (although nowhere near as brutal as the West).

Still, New York has made some solid improvements, added key contributors and put themselves in a position where they could exceed expectations this year. That’s progress and something Knicks fans should be pleased to see.