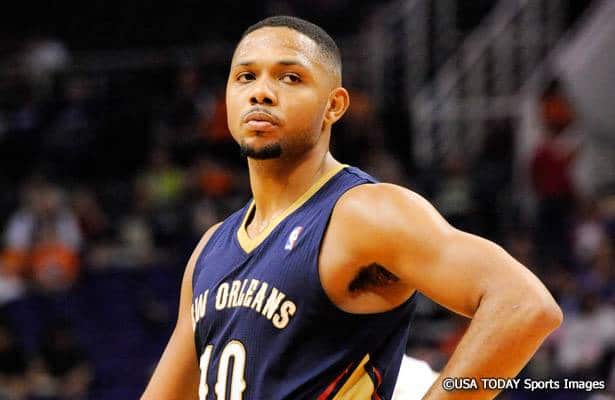 We’re officially one week away from the NBA’s trade deadline and as a result there are a lot of talks about potential transactions going on throughout the league. Here’s a look at the latest rumors to cross the wire:

According to Gery Woelfel of the Racine Journal Times, the Milwaukee Bucks were playing close attention to New Orleans Pelicans guard Eric Gordon last night. They could have stood to pay him a little more attention defensively, as he dropped 21 points on them in a 102-98 Pelicans win, but that’s not the kind of attention Woelfel was alluding to.

Gordon has long been on the trading block, almost since the moment New Orleans matched an offer sheet from the Phoenix Suns to keep him against his wishes. The problem is, up until this season, Gordon hasn’t been healthy enough for a team to strongly consider giving up assets for. This season, Gordon has played in 49 games and is averaging 15.8 points, 2.7 rebounds and 3.3 assists while shooting 43 percent from the field and 38 percent from distance.

He has a monster contract with two years remaining after this season; next year he’ll earn $14.8 million and he has a $15.5 million player option for the 2015-16 season. It’s only a terrible contract when he’s unhealthy though. When Gordon is at 100 percent, there are far worse deals in the league.

The problem for the Pelicans is that now that Gordon is healthy, their need for him is nowhere near as great as it was when they originally re-signed him. They acquired Tyreke Evans and Jrue Holiday last offseason and so far the trio has failed to mesh together as hoped.

If they feel like a change is necessary, the Bucks are certainly an interesting fit. The Bucks have the worst record in the league and up to this point have received underwhelming production at the shooting guard spot, where they spent the most money last offseason by signing Gary Neal and O.J. Mayo. Gordon would be an upgrade, especially if he comes in motivated and healthy.

The Bucks have the $8 million expiring contract of Caron Butler, a vital asset that could help them make a big splash like this. The only other hard part is finding a secondary piece that the Pelicans would be willing to accept despite the fact that they have long-term deals in place. Either Mayo or even Ersan Ilyasova would help the Bucks match Gordon’s salary and make the deal viable under the Collective Bargaining Agreement, with an additional filler piece or two from either side. Ilyasova is intriguing because he would bring the same skill set that the Pelicans are missing in Ryan Anderson, who could potentially be done for the rest of the season due to a neck injury.

Cleveland Cavaliers interim general manager David Griffin reportedly told Kyrie Irving and Dion Waiters that they need to have fun, quit feeling stressed and that their spots on the team are secured. This comes from Sam Amico of Fox Sports Cleveland.

The vote of confidence for Irving is unsurprising and really unnecessary. The Cavaliers, even through all the trauma and drama they’ve been through this season, have always remained Irving’s team. He’s the face of this franchise, the guy they want to build around and lead them to back to the playoffs. The only concern regarding Irving is whether they’re going to be able to field a competitive enough team around him to make him want to sign an extension this offseason.

Waiters on the other hand had reason to be concerned. He caught a lot of blame for the Cavaliers’ recent struggles, but Griffin does not appear to be ready to sell low on him yet.

Since Chris Grant was fired and replaced by Griffin, the Cavaliers have gone 4-0, with the first two victories coming against teams in the playoff hunt in the Washington Wizards and Memphis Grizzlies. That’s the team’s longest winning streak since 2010, when LeBron James was still in Cleveland. The streak makes Griffin’s decision process even more difficult. If the team is finally starting to come together, you don’t really want to mess with that, but at the same time his chances of keeping the job long-term are low if he doesn’t make anything happen at the deadline. It opens it up for others to have a chance at it this summer, so Griffin is in a difficult position right now, to say the least.

Kyle Lowry off the Trading Block

In the last two days we’ve heard that the New York Knicks were trying to revamp trade talks for Toronto Raptors point guard Kyle Lowry and that the Raptors were aggressively trying to sell high on him in order to avoid potentially losing him for nothing this offseason. However, Yahoo! Sports’ Adrian Wojnarowski is reporting the opposite.

“We’ve heard it from [Toronto] that he won’t be moved,” a rival front office executive told Wojnarowski in regards to Lowry.

While trading Lowry may have been the right move after the Rudy Gay trade, the team is certainly playing too well right now to break it up. Lowry is playing like an All-Star and the Raptors have a chance to make some noise in the playoffs. This may not have been general manager Masai Ujiri’s plan, but it’s the route they’re on and since it leads to playoffs, why not stay on it for now?

Rose Kills Comeback Talk: After Chicago Bulls center Joakim Noah commented on how hard Derrick Rose is working, talk of a potential comeback this postseason was inevitably sparked. However, at a recent charity, even Rose put that talk to rest.

“I’m feeling good, feels normal,” Rose said to Sam Smith of Bulls.com. “Just trying to take it one day at a time and trying to stay positive. It (injured knee) feels normal. It’s an easier (rehabilitation) process for sure (from a torn meniscus rather than an ACL in the 2012-13 season). I’m able to walk. It feels normal right now, but I know I’m not there.

“I’m not keeping it (playing) open. I just said right now I haven’t thought about it. I can’t think about it right now. I’m not running yet. When I get off the Alter G, that’s when I’ll consider coming back.”

Rose was much more definitive about playing this summer with Team USA, firmly stating that if he’s healthy he’s all in.