Morris on the Move Soon?

Markieff Morris made headlines over the offseason when he publicly demanded a trade from the Phoenix Suns and insisted that he wouldn’t play for the team during the 2015-16 season.

Morris was upset that the Suns had traded his twin brother, Marcus, to the Detroit Pistons during the summer. The Morris twins had each just signed an extension to remain with Phoenix, but the agreement was very unique. Rather than signing the two players separately, the Suns allotted $52 million to re-signing the twins and allowed the brothers to decide how they’d split the money. At the end of the day, Markieff ended up with a four-year deal worth $32 million and Marcus received a four-year deal worth $20 million. 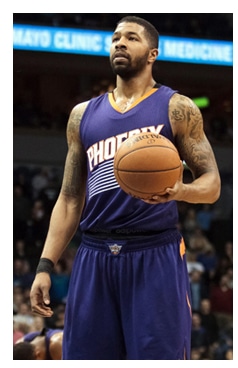 Markieff’s contract was considered a relative steal for the Suns, but the big man felt that taking less money would be worth it for the chance to continuing playing with Marcus. So when Marcus was traded shortly after that agreement was struck, Markieff. He went on the record in interviews, tweeted his frustrations and made it very clear several times that he didn’t think he had a future in Phoenix.

However, as media day approached, his tune quickly changed since he had zero leverage to push for a change of scenery. The Suns decided to hold onto Morris since his trade value was at an all-time low and they still viewed him as part of their long-term plan since he had been a key piece for them in recent years.

But even though no move was made, there was still tension between the two sides. And now, according to a report by ESPN’s Marc Stein, it appears the Suns may be ready to part ways with Morris. Stein writes that there’s “a growing belief around the league that the Suns are indeed prepared to finally move Morris.”

It’s very possible that the Suns’ recent change of heart on Morris is because he has really struggled early in this season, to the point that he was recently a healthy scratch by head coach Jeff Hornacek. It was the first time that Morris was benched due to a coach’s decision since his rookie season.

This year, Morris is averaging just 12.1 points, which is his lowest average since becoming a full-time starter. He’s also shooting a career-low 39 percent from the field as well as a career-low 27.9 percent from three-point range (on a career-high 2.5 attempts from downtown per game). Morris also has a 9.9 player efficiency rating – the league average is 15 – and his numbers are down across the board.

After progressing over the last two years, it seems that the Morris has regressed or at least plateaued. That may be why Phoenix is ready to give up on him and his development (and the fact that he remains disgruntled is very likely a factor too).

Now the question is: which team would be willing to trade for Morris with his on-court struggles and off-court drama? Well, two teams have already been linked to the 26-year-old power forward.

The first team, according to Stein’s report, is the Houston Rockets.

“Sources told ESPN.com the Rockets are in the market for roster upgrades in the wake of their disappointing 10-11 start and have Morris on their list of targets,” Stein writes.

It’s no secret that the Rockets have been weighing all of their options to improve their team after their disastrous start to the season. They’ve been playing a bit better lately, winning three straight games, but the team hasn’t looked like the legitimate contender everyone expected them to be entering this campaign (after advancing to the Western Conference Finals last year). This is why they fired head coach Kevin McHale 11 games into the season.

Also, Houston could use some help at power forward, which is why they recently moved Clint Capela into the starting four spot. Donatas Motiejunas just recently returned on Saturday from a back injury that kept him out for a long time so perhaps he could be the answer. However, the team has been linked to Morris ever since his trade demand became public since power forward seems to be their weak link. If they can get Morris without having to give up much (similar to how they acquired Ty Lawson from the Denver Nuggets without parting with significant assets), it could benefit them and potentially help them turn things around.

And a change of scenery could be exactly what Morris needs to get back to producing at a high level. After all, he’d be used differently in Houston, would have a lot of talent around and, most importantly, would no longer be disgruntled. Keep in mind, Morris is just one season removed from averaging 15.3 points (on 46.5 percent shooting from the field) along with 6.2 rebounds and 1.2 steals.

But the Rockets aren’t the only team considering a trade for Morris. The Detroit Pistons have also expressed some level of interest in Morris throughout this season, according to Vincent Ellis of the Detroit Free Press.

Ellis says that “someone who would have firsthand knowledge” informed him that the Pistons have been monitoring Morris’ situation with Phoenix for months.

Whether the Pistons have expressed serious interest in Morris (or had any negotiations with the Suns) thus far is unclear, but it does seem they’re another team to watch as this all unfolds. They make a ton of sense as a suitor for Markieff considering they acquired Markieff’s twin brother, Marcus, over the summer, which is what set off all of this drama with the Suns in the first place. Detroit could have interest in reuniting the twins, as we’ve seen that they play better and are more comfortable when they’re on the same team. For that reason alone, this rumor is interesting (and could perhaps help Markieff return to form since he’d once again be playing with Marcus).

This is certainly a situation to keep an eye on over the next few weeks, as it seems like the Suns are becoming more and more open to moving Morris. If he isn’t moved soon, it’s hard to imagine Morris being on the Suns’ roster past the February 16th trade deadline. If the rumors are true, it seems a move is very likely and it’s just a matter of when Phoenix will pull the trigger.

West Explains Why He Took Less to Join Spurs

During free agency this past summer, David West shocked the basketball world when he opted out of his $12 million salary with the Indiana Pacers to take a $1,499,187 contract (and a reserve role) with the San Antonio Spurs. At 35 years old, the opportunity to compete for a championship was clearly more important to West than the huge sum of money he left on the table.

But in a recent interview with Steve Bulpett of the Boston Herald, West described in greater detail why he felt comfortable making this decision and joining the Spurs at a discount price.

“People who know me personally understand the dynamics of the decision, and it really wasn’t that difficult of a decision to make just for where I am in my life,” West told Bulpett. “The only question I needed to answer was, ‘Will my lifestyle change? Will my family’s lifestyle change?’ That was a no. I’ve been preparing to make a decision like this for quite some time, just planning the right way and being a little patient early on and just always having the idea of living well below my means. That’s always allowed me the room to make a decision like I made.

“A lot of people can’t understand that because they just don’t know me. A lot of that criticism is from far off. To me, it was just a basketball decision.”

West explained that he learned as early as his rookie year to be financially responsible since an NBA player never knows how long they’ll be able to play. From a young age, he put himself in a position so that later in his career he could make decisions based on basketball rather than money.

And as far as why he chose the Spurs over other contenders that were courting him, he felt that San Antonio gave him his best chance to win a ring this season and know exactly what it takes to win the title he covets.

“It wasn’t really a difficult decision to make,” West told Bulpett. “It was just trying to get myself in a position to be a part of a good group, a good organization and having an opportunity to win — at least having a chance to win. And with that being a legitimate goal, this group’s goal is that every year. I just wanted to be a part of something like that.”

The Spurs are currently in second place in the Western Conference at 17-4, while West is contributing 5.2 points and 3.6 rebounds in 15 minutes per game.