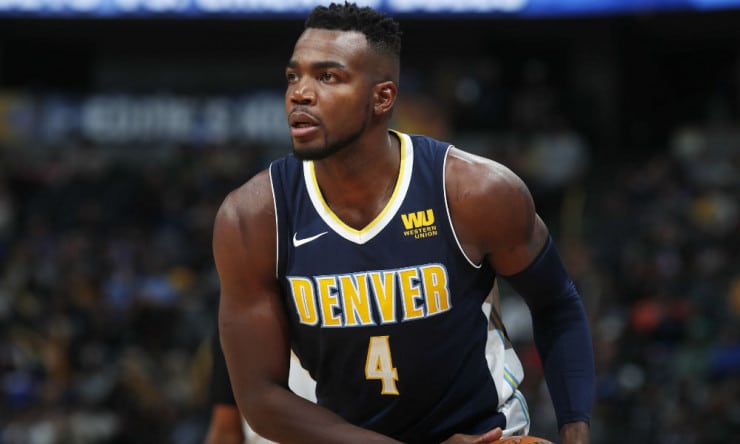 The squad features six players averaging more than 10 points per contest, not including two veterans in Kenneth Faried and Wilson Chandler, both of whom are career double-digit scorers. The Nuggets also boast one of the youngest teams in the league with only three players over the age of 30 (Paul Millsap, Chandler and Richard Jefferson).

But the team was dealt a huge blow this week when it was learned that four-time All-Star forward Paul Millsap will be out the next three to four months after suffering a torn ligament in his wrist.

Denver Nuggets forward Paul Millsap's surgery will be to repair a torn ligament in his left wrist and could sideline him for three months, league sources tell ESPN.

Millsap was extremely durable during his first 11 seasons in the league, missing 10 games just once (2017). This injury marks the first time in Millsap’s career where he will miss significant time while roaming the sideline in designer suits.

Millsap signed a three-year, $90 million deal this past summer and his acquisition was viewed as the next step in bringing the team back into the realm of the playoffs.

After an early season adjustment period, Denver (10-7) has rattled off seven victories in their last 10 games. For the team, Millsap’s injury news couldn’t have come at a worst time.  The veteran was averaging 15.3 points and 6.2 rebounds through 16 contests. The points are his lowest since 2013 and the rebounding output is his lowest since 2010, but Millsap’s presence has helped stabilize the young Nuggets on the offensive and defensive ends of the floor.

The Nuggets do have a plethora of power forwards on the depth chart. Veteran Kenneth Faried has started 366 contests for the franchise since being drafted in 2011. Faried’s future with the franchise has come into question in recent years as his playing time and role in the rotation has consistently diminished. The signing of Millsap likely solidified that fate, however, by not dealing Faried, the Nuggets were able to keep an insurance policy in the fold.

Third-year forward and former lottery pick Trey Lyles is another candidate for an increased workload. Lyles is currently averaging 6.8 minutes in 12 appearances but is shooting a career high from the field (52 percent) and three-point range (42 percent) in his limited court time. Another like candidate for more playing time is second-year big man Juan Hernangomez, who has currently appeared in just six contests.

Offensively, the Nuggets will be able to absorb his loss. Guards Gary Harris and Jamal Murray score the ball efficiently while swingman Will Barton provides pop off the bench. The team will also likely ride the back of their franchise player Nikola Jokic a bit more as well, with the big man averaging just 11.6 shot attempts per game—third on the team.

Perhaps the biggest area the Nuggets will have to adjust is on the defensive end.

The veteran’s track of improving a team’s prowess on the defensive end is proven and it’s exactly the type of “silent” attribute the Nuggets needed on a loaded young team still learning how to play on that side of the ball.

The Nuggets will be tested immediately without Millsap in the fold. The team travels to Houston (November 22) and will play nine of their next 13 games are on the road. This includes a six-game road trip from December 4 to December 13.

The team is currently 7-2 at home and just 3-5 away from the Pepsi center.

They will, for sure, be tested without Millsap.