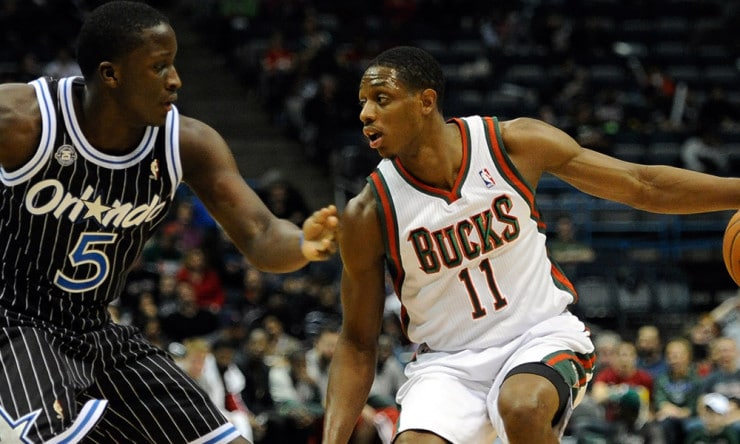 Yesterday, in this space, Steve Kyler provided the scoop on the players from the 2011 NBA Draft class who are eligible to receive early contract extensions.  Teams have until October 31 to negotiate a new deal or can opt to let the market set the players value in free agency next summer.

Today we’ll look at some early logjams in the backcourt around the league which could lead to some early deals during the early portion of the season. It’s never too early to talk potential roster movement.

Here are some situations to keep an eye on heading into training camp:

The former first round pick showed promise during his rookie season in 2013 under then head coach Larry Drew, even earning a couple starts in the starting lineup. However, in his sophomore campaign Jenkins was severely hampered due to injuries and when healthy was never seemingly in new head coach Mike Budenholzer’s rotation.

Making the waters for Jenkins even more murky heading into training camp is the Hawks’ offseason moves adding more depth at his position. The team signed veteran Thabo Sefolosha and promising guard Kent Bazemore in free agency and both guys could nudge Jenkins out of the rotation for good. One saving grace for Jenkins is his ability to shoot the ball. The former Vanderbilt University standout possesses elite range and Atlanta loves to space the floor for three-point attempts.

The Charlotte Hornets are on the rise and a key cog during their ascent in the standings has been the unheralded Gerald Henderson who has served as the team’s starting shooting guard the past three seasons. However, the team invested three-years and $27 million to emerging guard Lance Stephenson during the offseason, which will create a logjam for minutes at the two. Also vying for minutes at the position will be veteran Gary Neal and rookie P.J. Hairston.

Henderson, who will earn $6 million this season, holds a player option for the 2015-16campaign and could opt to test the free agent market next summer. Charlotte is banking on Stephenson to live up to his All-Star potential, which could leave Henderson with a significantly reduced role this season.

The Milwaukee Bucks are coming off a forgettable season but gave their fans some excitement in the form of drafting talented forward Jabari Parker and acquiring head coach Jason Kidd. But, there are still some areas to address before the team can exit the league’s basement.

Last summer the Bucks believed guard O.J. Mayo could become an important building block in their rebuild. However, the former lottery pick struggled mightily in his first season in Milwaukee and in turn the franchise added Jerryd Bayless and Jared Dudley during the summer as insurance.

Between Bayless, Dudley, Mayo and Brandon Knight the Bucks have nearly $20 million in payroll invested at the two guard position. Of course Knight could potentially spend a chunk of time providing coverage at point guard, which could loosen the rotation crunch in the backcourt. Dudley could also play some three, although Parker and Giannis Antetokounmpo look poised to take most of the minutes there. But for a rebuilding team, like Milwaukee, it wouldn’t be surprising to see the club attempt to flip one of these assets to address a more pressing need.

Shumpert’s name emerged in trade rumors early and often last season for a Knicks team that failed to live up to expectations. All indications from newly minted president of basketball operations Phil Jackson point toward Shumpert being a part of their retooling process. But you can’t ignore the fact the franchise spent the offseason improving wing depth by adding rookie Cleanthony Early and veteran Travis Outlaw. The Knicks also have promising swingman Tim Hardaway Jr. on the roster. This makes Shumpert one of the Knicks’ most attractive trade assets which could yield a worthy piece in return.

Shumpert is eligible for an early extension. It’s unlikely he gets an overwhelming offer from the Knicks prior to October 31 deadline which means a trip to free agency is likely in the cards next summer. If those other wing performers play well, it wouldn’t surprise if the Knicks once again float Shumpert’s name around the league early on.

The Minnesota Timberwolves are actively attempting to trade veteran guard J.J. Barea, according to numerous media reports. The team has yet to find any takers for Barea, who is in the final year of his current deal and set to earn $4.5 million.

The new collective bargaining agreement has made expiring contracts less desirable than in the past, but the Timberwolves will ultimately find a taker or could buyout Barea’s deal as a last resort.

After a whirlwind offseason we are less than two weeks away from the start of NBA training camps. The Basketball Insiders crew has been hard at work previewing the upcoming 2014-15 campaign for each and every franchise.