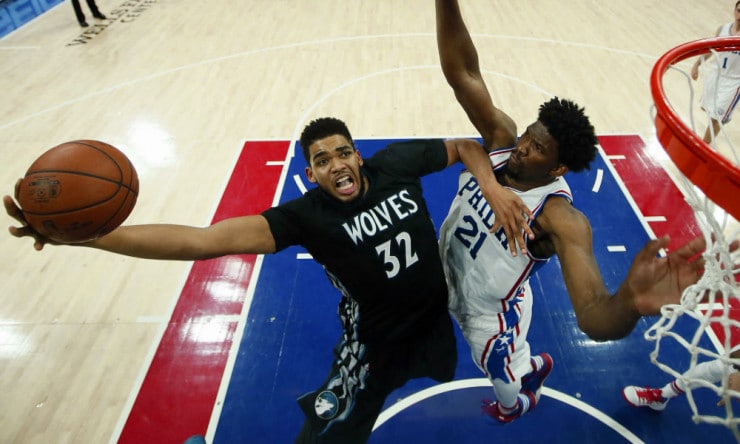 With 2018 finally (mercifully) here and All-Star voting well underway, now is a perfectly appropriate time to take a closer look at which breakout players could be on the cusp of making their first All-Star teams.

Of all the players mentioned here, Oladipo is far and away the most likely to appear on his first All-Star team come February. He transformed into the savior Indiana fans did not know they were getting in the Paul George trade and is already doing things that George didn’t (like hitting game-winning shots).

Among the top-10 scorers in the NBA this year and first among Eastern Conference guards, Oladipo has put up the numbers but also has shouldered the load of a team that absolutely would not be in playoff contention without his transcendence. He seems like a lock to make the team, and based on merit, would even be worthy of starting.

While the Sixers have not taken the step forward as a team we all would have liked, Embiid himself has continued along the path he was on his rookie season before succumbing to injury. Assuming he stays healthy through February, he could very well be on track to make his first All-Star team this year, perhaps even through the popular fan vote. That wouldn’t be shocking considering his affluence on Twitter and charismatic gleam, but the numbers support a nod, too. Embiid is first among Eastern Conference centers in scoring, fourth in rebounds, third in assists and second in blocks. All that plus his penchant for generating social media gold could easily get him in.

Embiid’s teammate Ben Simmons will get some consideration, too, though making the All-Star team as a rookie always has been a tough row to hoe. In fact, nobody has done that since Blake Griffin in 2011, and while it’s not likely a sub-.500 team ends up with two All-Stars, Simmons has the numbers to at least stake a claim. Currently, he is averaging 16.6 points, 8.6 rebounds and 7.5 assists per game, while also chipping in nearly a steal and two blocks every contest. Frankly, his candidacy boils down to how the NBA world feels about John Wall and Kemba Walker, as those two guys are likely to be his stiffest competition at the end of the Eastern Conference guard rotation.

The Knicks are back in playoff contention for the first time in half a decade, and Porzingis’ continued rise into the NBA elite is a big reason why. Currently fifth among all Eastern Conference scorers at 24.5 points per game, Porzingis is now the unquestioned cornerstone of the franchise who has done everything asked of him. He’s shooting a career-high from three, averaging a career-high 2.2 blocks per game, and currently boasting a career-high 22.5 PER. Most importantly, his team is winning way more games than expected, which combined with his stats is more than enough to earn him serious consideration for this year’s seemingly wide-open Eastern Conference All-Star squad.

For those that haven’t been paying close attention to the Washington Wizards this season, it looks for now as though Beal has a better chance of making the All-Star team than his All-Star teammate John Wall. The funny thing is that he’s not really doing anything different from a year ago except shooting a little less efficiently and hauling in a career-high 4.4 rebounds per game. But his ability to take over games and his transformation into a mature veteran leader in Washington has really put him on the map this year, especially with the exodus of some of last year’s Eastern Conference All-Stars to the West. On New Year’s Eve, for example, Beal dropped a 39-9-9 line on the Chicago Bulls and scored 15 straight points in a key stretch of the fourth quarter to help spark a win, and it’s that kind of thing that’s going to boost the trumpeting that Beal finally deserves his spot on this team.

Out West, where there are so many more big names (and so many more Golden State Warriors), potential newbs are going to have a harder time sneaking into the All-Star Game. Take Clint Capela for example, who is having a career year for the West’s second-best team. While his 14 points per game don’t appear transcendent, he’s doing it shooting a league-best 68.2 percent from the field while also hauling in 11.1 rebounds per game, which is fourth among Western Conference players. His 26.5 PER is one of the highest in the league among big men, and despite a December skid, his team is one of the best in the league. He’s not making the All-Star team ahead of some of the flashier personalities in this pool, but his play this year has at least earned him some recognition. He’ll end up with an appropriate number of votes if he does fall short of earning a roster spot.

Jokic’s style of play is about as easy on the eyes as it gets for NBA big men, and his 2017-2018 campaign has been every bit as good as his 2016-2017 breakout year. Despite averaging a double-double for the first time in his three-year career, Jokic’s insane field goal percentage from a year ago is down, even as he shoots and makes more of his three-pointers. Even more convincing is that Denver currently is the sixth-best team in the West, even after having lost Paul Millsap. For Jokic, making an All-Star squad is more than justifiable. There’s nothing really new to report here, as Jokic is everything he was a year ago. That wasn’t enough to make him in All-Star in 2017, though. Will it be enough this year?

There’s just something about those Kentucky big men in the Western Conference. Towns, as well as Anthony Davis and DeMarcus Cousins, all are averaging 20/10 double-doubles this season, though Towns, at 20.3 points and 11.5 boards per game, has been the “least dominant” of the three. While everything is relative, those 20.3 points are down 20 percent from a year ago, likely a result of working Jimmy Butler into that Minnesota offense, but the Wolves are fourth in that tough conference and Towns is as deserving as anybody on the team to represent Minnesota in the All-Star Game.

NBA All-Star voting remains open, so if there is a first-time All-Star you’d like to see represent their conference at the All-Star game in just under seven weeks, now is the time to get your votes in to help ensure they make it there.