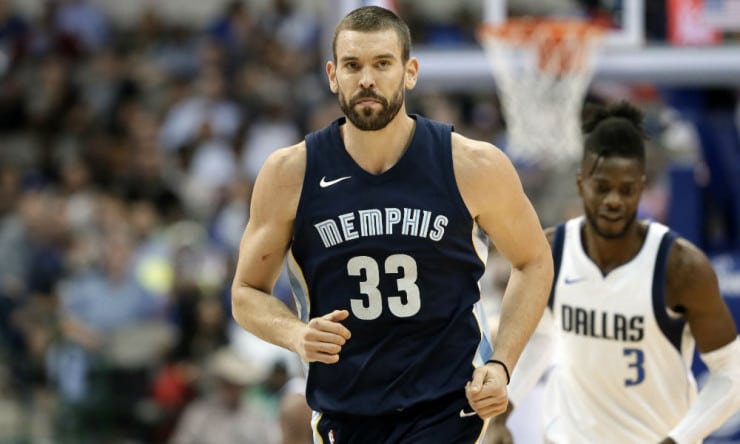 In an era of pace and space and finesse basketball, the Memphis Grizzlies have been able to stay afloat mainly by playing a physical game inside of the three-point line.

This is a throwback to yesteryear.

But as we approach the quarter point of the new season, it’s becoming apparent the Grizzlies may have to stop tweaking and undergo a major overhaul—the start of a rebuilding process.

The decision to rebuild for any franchise is never easy, especially for a smaller market team that has been able to build out a winning culture. Despite the playoff appearances and great culture, Memphis has not developed into a free agency hot spot for new NBA talents, nor has the team’s front office been able to hit a home run via the draft.

Earlier this week, the franchise fired head coach David Fizdale, replacing him with interim coach J.B. Bickerstaff. The move was surprising to most around the league, as Fizdale led the team to a playoff berth last season in his first at the helm. The team started this season 7-4 before an eight game losing streak doomed Fizdale.

The Grizzlies are in a tough position. Rebuild or retool?

In a league where dominance at the center position has dwindled and three-point shooting guards have taking priority, Memphis’ best player is All-Star center Marc Gasol. The veteran, now 32, still has three years remaining on his current deal and is playing at a high level despite shooting a career low 42 percent from the floor.

Gasol is a versatile big man who can score, rebound, pass and defend, but the issues for the Grizzlies revolve around the supporting cast of characters filling out the rest of the roster.

Obviously, the talk of any rebuild starts with evaluating a team’s assets at the top of the lineup and taking a long and hard look in evaluating whether they can get a proper return to begin the rebuilding project.

Gasol is, without a doubt, the Grizzlies’ best player, but he has also played his entire career in Memphis. The franchise may not be willing to take another hit from a public relations standpoint from their fan base, especially after allowing veteran forward Zach Randolph to walk in free agency this past summer.

Along with Gasol, those two players were the foundation of what’s become known as the Grizzlies hard-nosed, tough-as-nails and bring your lunch pail to work mentality in recent years.

The next person to evaluate is point guard Mike Conley.

In 2016, the team made Conley the highest paid player in the league at that time by signing him to a massive five-year $150 million deal.

Conley is a top 15 point guard in the league without question, however, the problem for the Grizzlies is that he’s never developed into an All-Star caliber player. Now, to be fair, in a conference filled with guards such as Russell Westbrook, Stephen Curry, Chris Paul, Damian Lillard, and James Harden, an All-Star appearance is far from guaranteed. However, it does say a lot about a franchise when their highest paid player isn’t in those discussions. Conley has appeared in 12 games this season and is currently on the shelf nursing foot injuries.

The next area hindering the Grizzlies from potentially retooling the roster on the fly is the massive contract of forward Chandler Parsons. The Grizzlies signed Parsons to a four-year, $94 million max deal in 2016 with the hope that the wing could return to the form of his days with the Houston Rockets. However, after multiple knee surgeries it’s become apparent Parsons is no longer the player that once oozed 15 to 18 point per night potential on a playoff team.

Now, this isn’t the slam Parsons, because coming back from serious injuries is tough, but when you look at the Grizzlies’ current salary cap situation and the fact that Parsons is still owed over $70 million through 2020, it’s going to be a hurdle the franchise has to overcome. On the season, Parsons is averaging 8.6 points and 2.7 rebounds in 20 minutes of action per night. The positive is the fact he’s shooting a career best 52 percent from the floor, while the negative is that this type of production doesn’t mesh with a guy being paid the max.

At the end of the day, the Grizzlies got off to a very slow start. The team isn’t accustomed to that, especially not with a playoff streak dating back to 2011.

But when you look at the personnel losses the team has suffered in just the past few months, it becomes even clearer why the team is struggling. Losing the veteran leadership of Allen, Randolph and former All-Star Vince Carter (also departed in free agency) were tough blows from a culture standpoint. Strong veteran presences are also a primary driver of a coach’s success in the NBA. Losing those guys in an off-season is a tough blow and even though those three guys are all past their primes, they were still productive and respected enough in the locker room to make a difference.

Whichever way the Grizzlies decide to move from here, it’s time to look at the front office for leadership. The team has dismissed Lionel Hollins, Dave Joerger and now Fizdale after each were able to guide the team to the playoffs. The squad has also undergone multiple roster revamps in recent years.

Now, with Fizdale being fired, it once again the Grizzlies are at a crossroads. Retool or rebuild?

It’s the question of the day out in Memphis—and it may finally be time to consider the latter.