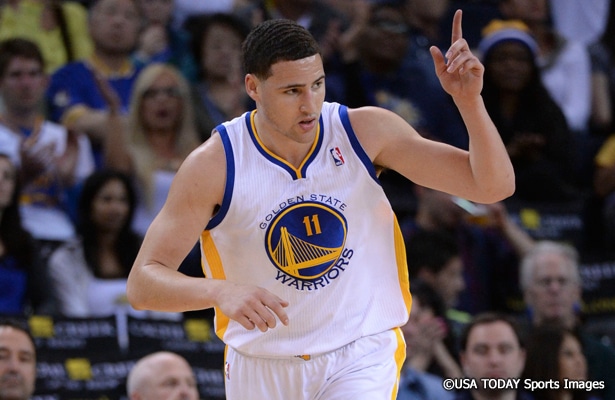 Warriors gambling on core group being ready to take next step

The Golden State Warriors are undoubtedly one of the most talented teams in the league. But for all of the talent on the roster the team was unceremoniously bounced in the first round of the playoffs last season after recording 51 regular season victories – their most since the 1991-92 campaign.

In some ways the Warriors’ front office felt the team was underachieving and relieved head coach Mark Jackson of his duties, opting to roll with first time coach Steve Kerr who the organization says is a better philosophical fit. Management’s decision to bring in Kerr shows the franchise believes a philosophy shift, not an influx of more talent, is the key to get them over the hump and competing for Western Conference supremacy.

Further solidifying this stance was the team’s reluctance to include emerging shooting guard Klay Thompson in trade talks with the Minnesota Timberwolves for All-Star forward Kevin Love.

Love is a proven All-Star caliber talent and an Olympic gold medalist who is coming off a season averaging 26.1 points and 12.5 rebounds in 77 contests with the Timberwolves. Elite level talent like Love’s, approaching his respective prime, doesn’t come knocking on your door frequently but Golden State’s decided to hold the line and not include Thompson in any potential deals.

On paper, most could argue the Warriors should have pursued Love even if it ultimately cost Thompson. But an underrated aspect of the NBA is how chemistry plays a pivotal role in a team’s success on the floor.

The Warriors are essentially placing their bets on the continued maturation of their core group consisting of All-Star guard Stephen Curry, Thompson and former All-Stars Andre Iguodala and David Lee.

Minnesota ultimately found a taker for Love agreeing in principle to a deal which would send the forward to Cleveland in exchange for the past two No. 1 overall picks, Andrew Wiggins and Anthony Bennett and a future first round pick.

Curry says Thompson heard his name mentioned in the trade talks but he was proud of how his teammate handled the onslaught of reports this summer.

“He actually took it pretty well.” Curry told Diamond Leung of the Contra Costa Times. “Those rumors come around obviously every summer with free agency and teams trying to get better, and it’s going to be hard at some point in your career to avoid it, so he took it well. Obviously, our trade didn’t go through. It didn’t happen, and they’re keeping our core intact, so I know he’s pretty happy with how things turned out.”

Mychal Thompson, the guard’s father, says he’s glad the younger Thompson was able to remain with the Warriors for the foreseeable future.

“I’m happy about that,” the elder Thompson said on the ESPN LA radio show he co-hosts. “He likes it there. He did not want to get traded. As a matter of fact, he saw Kevin in Vegas during the Team USA workouts and said, ‘Thanks a lot, buddy.’ He was teasing him and said, ‘Thanks for putting my name out there in all the trade things’ because he wanted to come to the Warriors.

“He’s happy to stay with the Warriors. Thanks to Jerry West and Steve Kerr, they wanted to keep those guys together as they should, so I’m looking forward to that.”

Thompson averaged 18.4 points on 42 percent shooting from three-point range last season, further establishing himself as one of the league’s premier shooting guards.

On Tuesday an order by a California court confirmed the authority of Shelly Sterling selling the Los Angeles Clippers on behalf of the Sterling Family Trust to former Microsoft CEO Steve Ballmer. The league announced the news shortly thereafter confirming Ballmer’s new role as team owner.

Ballmer previously had failed in an attempt to purchase the Sacramento Kings. Ballmer reportedly wanted to move the Kings franchise to Seattle, where he resides, but was unsuccessful in his bid. So it’s no surprise the talk of relocation once again emerged after his purchase of the Clippers became official.

Ballmer immediately shot down any rumors of relocating the Clippers outside of Los Angeles.

“The Clippers are more valuable in Los Angeles,” Ballmer told ESPN in an interview. “It’s a phenomenal city, a phenomenal market, phenomenal everything. I like Los Angeles and there’s an opportunity to spend some time there in addition to Seattle. That is phenomenal.

“The NBA has made it clear they want fan bases to be able to keep their teams. I know that firsthand, because we did take a whirl at moving Sacramento and that didn’t work. I’m all in on the Los Angeles Clippers. We’re moving forward. We’ve got to work to be the best we can be to take advantage of all the assets in the community.”

Ballmer promises to be hands on in his approach and believes the team has what it takes to win a championship in relatively short order.

“It’s very, very exciting. I’m a basketball nut,” Ballmer said. “I’ve got time. I love Los Angeles. I love Seattle, too, which is where we have our home. But the notion of spending a lot of time in Los Angeles has been exciting to me for years. The community down there is great. I look forward to supporting the community, the fan base, the staff, [head coach] Doc [Rivers] and the players to take this thing to higher heights.”

The Clippers won a franchise record 57 games last season but was bounced in the Western Conference Semifinals for the second time in the past three years.