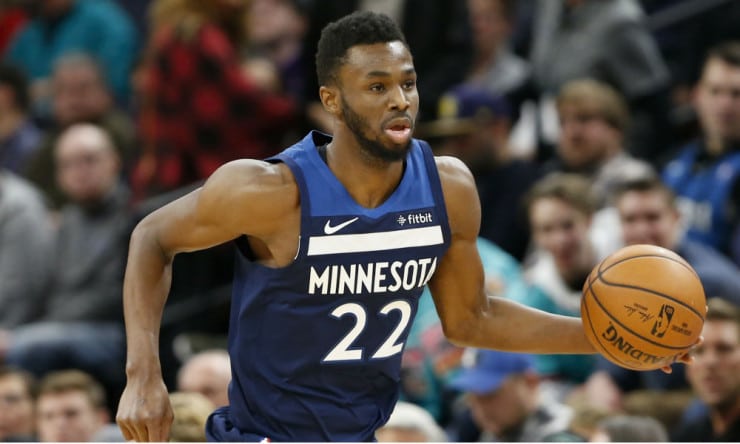 As the calendar flipped from 2018 to 2019, Andrew Wiggins dismissed Minnesota Timberwolves fans with profanity.

He closed out the year with just five of 12 free throws made in a three-point loss to the Atlanta Hawks, and the Minnesota and Target Center faithful reigned boos down on the former top pick. As far as Wiggins was concerned, the boos revealed those fans’ true character.

But just 11 games into the 2019-20 season, those same fans have showered Wiggins with praise on a semi-regular basis. When he went for 40 points in an overtime victory against the Golden State Warriors on Friday, Wiggins’ postgame interview was interrupted by their cheers, a moment he openly relished. Wednesday’s blowout of the San Antonio Spurs was more of the same, capped off with a standing ovation.

Wiggins’ unexpected development this season, particularly in the last five games, is certainly fraught with the “small sample size” qualifier and concerns of sustainability. Yet, that binary change from the crowd may be the most surprising part of it all.

So far, Wiggins has looked like a truly transformed player and, over the last five games, has reversed course to become a crowd favorite, a clutch player and a decent distributor. Even Timberwolves’ head coach Ryan Saunders couldn’t have seen such a drastic change coming so quickly.

To start the season, Wiggins missed his first 13 attempts from beyond the arc, including six to start Minnesota’s home opener against the Miami HEAT. If the boos didn’t come, it was only because the Timberwolves had stayed close to Miami in spite of Wiggins.

Then he hit a 3 off a cross-court pass from Robert Covington.

And, with that, the floodgates broke open. In the next few minutes, Wiggins hit another three shots from deep to put the HEAT away, the second game he closed for Minnesota despite an otherwise rough shooting night.

“I’m glad he stuck to the shot values,” Saunders said after the game. “I told him that in the locker room.

“We’ll continue to say that. He was big. I’d like to hit threes earlier in the game, too, and in the middle, instead of just saving them for the end, but I’ll take them.”

Even with the clutch barrage, Wiggins’ early-season shooting didn’t improve much. Through the Timberwolves’ first six games, he was only 13-of-39 from deep and shooting 43.2 percent from the field, averaging 21.7 points, 5.2 rebounds and 1.7 assists per game.

But Wiggins was, at least, still buying into Saunders’ spacing system.

Saunders’ system has worked to Wiggins’ advantage this season in that it has created chances for him to drive to the basket, one of his few strengths in previous seasons. With a big, usually Karl Anthony-Towns, on the perimeter, there is plenty of space available for Wiggins to operate in the paint.

In fact, it’s often Towns setting up Wiggins for such drives.

While Wiggins had his struggles with the Timberwolves’ new up-tempo style, dump-offs like this as he cuts to the basket were never one of them. Rather, it was the outside aspect that plagued him.

Minnesota’s preseason featured multiple, awkward sequences from Wiggins of elongated stepbacks, trying to turn long 2s into 3s. Once the season commenced, Wiggins’ teammates were creating open looks, he just simply couldn’t hit them. But, in shooting from deep, even if missing, Wiggins was taking a positive step in his growth.

“It’s tough because it is a complete change in system and philosophy from what he has been used to,” Saunders told Basketball Insiders. “Not to say that he was ever wrong by any means, but it’s how we’re going to do things moving forward.

Wiggins hasn’t completely broken his worst habit, an over-reliance on the mid-range jumper, but he has distinctly cut back on it. Last season, more than 30 percent of Wiggins’ shots came further than 10 feet from the hoop but short of the three-point arc, but he made only 33.6 percent of them.

Through 11 games this season, Wiggins has taken only 20 percent of such shots, while his percentage on them has ticked up to 39.1 percent. He has changed his game, at least to a degree, and it has added some variety to his offense.

Rather than just pulling up from mid-range, Wiggins now more often bodies a defender into the post in transition.

Or he pulls up from deep.

Or he knocks it down out of the corner.

Those are the tenets of Saunders’ offense, and in the last five games, Wiggins has embraced them to the tune of 31.6 points, 5 rebounds and 6 assists while shooting 52.1 percent from the field and 39.4 percent from deep.

Saunders said that after Wiggins lifted Minnesota over Miami, back when he was still struggling to find consistency in Saunders’ new offense. But Saunders preached patience. While he didn’t anticipate Wiggins exploding just two weeks later, nor that said explosion would come without a true point guard on the active roster — for much of Wiggins’ hot streak, Jeff Teague has been sidelined by illness while Shabazz Napier has been working through a hamstring injury — Saunders believed in him.

With time, Wiggins has broken through with 88 fourth-quarter points this season, highlighted by 35 in clutch situations while shooting 13-of-21 from the field and 4-of-8 from deep. He’s delivered the Timberwolves four of their wins, while he has risen to the occasion in multiple late-game situations.

Wiggins has also dished out at least five assists in five straight games, a rarity in seasons past.

It took four coaches, six seasons and countless mid-range jumpers, but Wiggins has been embraced by fans and teammates like never before. Perhaps all he needed was time, some patience from others and the ball in his hands.

Contributing writer to Basketball Insiders, based in Minneapolis since 2017 with previous stops in Dallas and Los Angeles. Went 32-of-40 at the backyard free throw line this past Christmas. Twitter: @D_Farmer