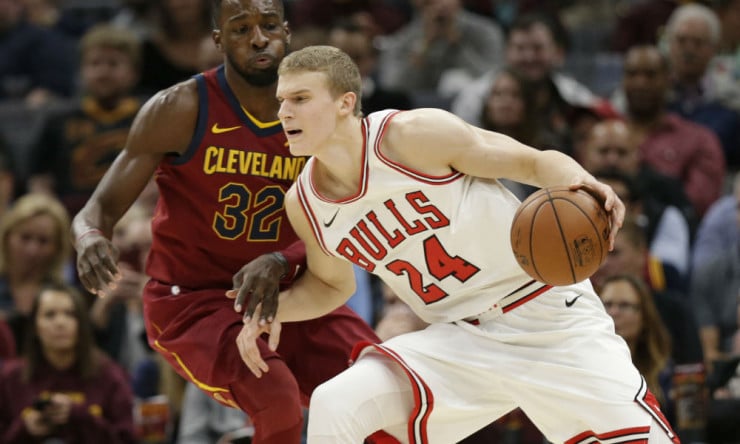 As it stands currently, the Chicago Bulls (18-29) are six games behind the Philadelphia 76ers (22-21) for the last and final playoff spot in the Eastern Conference. The season has been filled with ups and downs, inconsistency and stretches of promises for the franchise after last summer’s roster transformation.

The early inconsistency is perhaps to be expected after the team parted ways with All-Star performers Jimmy Butler and Dwyane Wade during the offseason. Losing veterans in the offseason, especially All-Star level guys, usually sends a team back to the draft lottery quicker than any other method. The Bulls were undoubtedly expected to endure a season full of bumps and bruises with new leaders such as Zach LaVine and Nikola Mirotic thrust into more alpha roles than they were accustomed to. Throw in the fact that LaVine began the year rehabbing his knee and Mirotic began the campaign recuperating from a fistfight with teammate Bobby Portis—a slow start was all but guaranteed.

One of the players giving Bulls fans a reason of optimism for the future is rookie forward Lauri Markkanen, who is currently averaging 15.5 points, 7.7 rebounds and 2.3 made three-pointers per game. Markkanen has started in all 44 off his appearances and is one of only six rookies averaging at least 30 minutes per contest.

Markkanen is shooting 36 percent from three-point range on the season while attempting over six shots from distance per game. The rookie has hit at least one-three pointer in 39 out of his 44 appearances this season. While Markkanen’s three-point efficiency is great, the Bulls organization has also been seeking to find ways to get the talented forward more involved inside the three-point line.

In a recent trip to Atlanta, Markkanen scored 19 points in 30 minutes and didn’t connect on a single three-pointer (four attempts). If you were just scanning the box score, your initial impression would be of a game that lacked efficiency. However, those within the Bulls organization were impressed that their young player found other ways to score when his long ball wasn’t dropping.

“Lauri had 19 points and didn’t make a three [pointer],” Bulls head coach Fred Hoiberg said after the game. “We went to him right out of the gate and got a couple of dunks. I thought our guys had great awareness with high-low (passing) action. I liked his attack to the basket; he had a great Euro step.”

The Bulls employ a high-low offensive philosophy. This is also referred to as playing inside-out. The Bulls have paired Markkanen in a variety of different combinations sometimes with center Robin Lopez or point guard Jerian Grant. The goal is ultimately to get the rookie quality looks in varying areas of the floor.

Teams are starting to take note of Markkanen’s penchant for the long range game. The Hawks’ mission was to limit the amount of clean looks Markkanen was able to get on the perimeter.

“We really wanted to take the 3-point line away from Markkanen,” Hawks coach Mike Budenholzer said after his team lost to the Bulls on Saturday. “I guess we won the battle and lost the war.”

In Markkanen’s last three games he’s shooting just 2-for-15 from three-point range, but still averaging 15 points per game. The ability of Markkanen to diversify his game will ultimately go a long way in determining how long the Bulls will be a sub .500 team in the future.