Apparently, the fourth time is the charm. At least it is for Detroit Pistons center Andre Drummond.

Slowly but surely, the 22-year-old has become a fixture at NBA All-Star Weekend. But this year, when he takes his talents to Toronto, he will do so to participate in the main event on Sunday.

“It was an overwhelming feeling for me, it was a happy day for me,” Drummond said of being selected as an All-Star for the first time in his career. “Ever since I’ve been a little boy, I’ve always dreamt of playing in the All-Star game. I’ve been involved in All-Star Weekend for the first four years of my career and to make it to that Sunday game, there’s no better feeling than that.”

The veteran head coach has quickly reversed the fortunes of the team that he inherited. Back when he assumed the helm in Detroit, the team was coming off of a 29-53 season and was saddled with pieces that didn’t match and a few players that were malcontents.

If Drummond is in the center of it all, then Reggie Jackson would be flanking him.

Still, Drummond’s rise is inspiring not only because he is a young player fulfilling his potential before our very eyes, but also because he happens to be one thriving while playing a style of basketball that many foolishly believed incapable of producing wins in today’s NBA.

When faced with the tough prospect of allowing Greg Monroe to flee for Milwaukee last summer, Van Gundy gambled that his team would be better off without the young big man, just like he famously did when he let go of Josh Smith last season.

And as Drummond packs his passport for Toronto, the man whose name doesn’t get called much around NBA circles—that would be Stan Van Gundy—is quietly looking like a genius. It is with his experience and tutelage that the young duo of Drummond and Jackson are learning how to play winning basketball in the NBA.

“Despite the losses that we’ve had, we’re starting to come together. We can’t win them all but we don’t allow the games to get us down and allow the losses to pile up.”

To Drummond’s point, the Pistons have lost as many as three straight games only twice this season. Compare that to last season when the club had an early 13-game losing streak before enduring a 10-game slide that spanned from late February to early March. 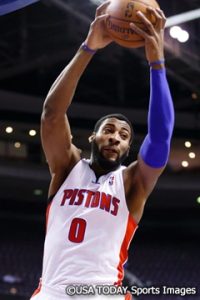 For the most part, we tend to pay most attention to the teams at the top. Often, we forget the simple fact that those that are at the top usually had to spend time ascending. The way it looks right now is that the Pistons could be one such team. Aside from Drummond and Jackson, Van Gundy’s team also boasts a few other impressive youngsters who may lay the foundation for a formidable core: Stanley Johnson, Kentavious Caldwell-Pope, Ersan Ilyasova and Marcus Morris immediately come to mind.

Of the group, only Morris seems to have had issues in Detroit, and that harmony is usually what winning teams are made of. Well, that and a dynamic duo.

As Drummond enters play on February 2 having averaged 17.3 points and 15.1 rebounds per game, he also does so leading the league in double-doubles. The center has recorded 40 double-doubles in the team’s first 49 games, leading both Russell Westbrook (33) and DeMarcus Cousins (28) by a comfortable margin.

Aside from his coach, Drummond, by his own admission, routinely picks the brains of some of the former “Bad Boy” Pistons that still work for and around the organization. That list includes Rich Mahorn, James Edwards and Hall-of-Famer Isiah Thomas.

Being the throwback that he is, some have begun to wonder how Drummond would have fared against the likes of some of the bigger and tougher players of yesteryear.

“I definitely wouldn’t have played back at that time, that was a little rough,” Drummond said before admitting it was in jest. “I would have loved to play with them back in the day, they’re the ones that really started all this physical play, so I’m ready for what they started.”

It seems that Drummond is also ready for what he started—and what Van Gundy continued. Remember, it wasn’t all that long ago (it was back in 2012-13) that Drummond was a rookie who was playing behind Greg Monroe.

With one thriving in Detroit and the other being featured on a team that is struggling, one can fairly ponder just what else Drummond, at just 22 years old, is ready for. Still raw and with appreciable upside, the NBA doesn’t often see young big men become this productive, this quickly.

So yes, for Drummond, the fourth time is the charm. For the first time in his career, he will suit up to play in the NBA All-Star Game.

Odds are, it won’t be his last.