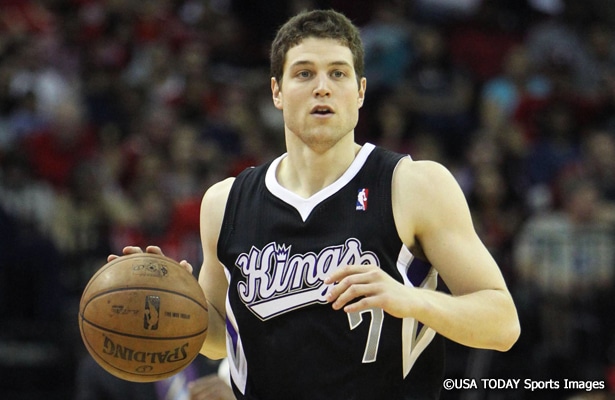 What Jimmer Fredette Would Mean for Chicago

All day long on Friday, smart NBA people and trusted NBA reporters speculated that former Sacramento Kings guard Jimmer Fredette would end up with the Chicago Bulls for at least the remainder of the 2013-14 season. The transaction is far from official, but it really looks like Fredette will end up with Chicago as long as he clears waivers.

From a money standpoint for the Bulls, there would be zero risk involved in such an acquisition, but how, exactly, would Fredette’s skill set work under head coach Tom Thibodeau? It’s a question worth asking because for every potential positive there seems to be an equally important caveat. Jimmer is a buzzy name destined to be a fan-favorite in Chicago, but it’s fair to wonder how well he’ll actually fit on that roster.

First, the good stuff: Despite only playing 11.3 minutes per game this season, Fredette is nailing a three-point shot per game at a 49.3 percent clip. He’s a really good shooter, but his mojo has been a bit stunted in his third season in the league because of inconsistent playing time. He can get hot, which he proved as a star at Brigham Young University, where he averaged just shy of 30 points per game his junior season. But in the NBA, that heat hasn’t been as commonplace as the Kings would have hoped.

Those big college scoring numbers made him a lottery pick in 2011, but in a crowded guard rotation in Sacramento, he never really was handed the keys to the Kings’ castle. For the Bulls, though, with Derrick Rose out for the year and Kirk Hinrich losing steam weekly, there’s a great opportunity for Fredette to shine in Chicago. This is the place where point guards go to revive their careers (see: Nate Robinson and D.J. Augustin), so there’s a good chance that Fredette will see a huge bump in minutes and could very well have a good measure of success once he’s given the opportunity to see more consistent playing time.

It’s also worth noting that the Kings loved Fredette as a person. He’s a hard worker and a good human being, which fits well with the kind of personnel Chicago typically hires.

Defensively, however, Jimmer is no good. The Bulls are one of the league’s best defensive teams under Thibodeau, which has allowed them to hide bad perimeter defenders in the past (think Kyle Korver). However, with only about six weeks left of the regular season, it might not be all that easy to teach a bad defender the rotations in so short a time. He’s also not especially athletic, nor does he create his own shot or handle the ball particularly well.

There are clear deficiencies here, but since the Bulls are 27th in the league in three-point percentage and dead last in points scored, their primary concern right now is adding some help on the offensive end of the basketball court. That’s a place where Jimmer can do some damage, and should the Bulls sign him as expected, they’ll want him to step in immediately to start chipping away at those shortcomings.

Financially, the Bulls would give Fredette a pro-rated portion of the league minimum salary, which is enough to keep them comfortably under the luxury tax threshold this season. Currently only $600,000 short of that number, the Bulls aren’t likely to pursue a 14th player because of some uncertainty about a potential bonus for Taj Gibson, who could earn some extra cash for making one of the All-Defensive Teams. It’s not likely that he will make it since he’s a reserve, but the All-Defensive Second Team isn’t completely out of the question, so if Chicago were to sign a 14th player and Gibson were to earn his bonus, the Bulls would go over the luxury tax for a second consecutive year. The amount they’d be over would be tiny, but it would bump up their repeat taxpayer status unnecessarily in a year when they’re clearly not competing for a championship.

The Bulls can, however, offer a deal beyond this current season, perhaps as a team option, but that’s not likely considering Fredette’s value couldn’t really be any lower than it currently is. A strong audition with Chicago for a couple of months could earn him a lot of money in free agency, so he’d have little incentive to sign any sort of longer-term contract (unless the second year was a player option as injury insurance).

The Bulls also aren’t going to commit guaranteed money that could eat into their cap space this summer. Carmelo Anthony is a pipe dream at this point, but every couple of million dollars that goes toward someone else lowers their chances at adding another star.

It’s not yet a done deal, but it appears imminent at this point that Fredette will end up in Chicago. The Bulls also expressed interest in free agents Caron Butler and Danny Granger, since they’ve needed small forward depth since trading away Luol Deng. However, Butler and Granger opted to join Western Conference contenders. So now the Bulls turn to Fredette, who is one of the most intriguing players currently available.

For Fredette, signing with the Bulls makes a lot of sense. He’s joining a playoff team with playing time available and a need for him to explode offensively. In other words, this is the best thing that could have happened to him. This looks like a match made in heaven, at least for the next 8-10 weeks.

Gasol Would Take Less Money for Chance to Win

The Los Angeles Lakers are, to put it bluntly, in a rough place this year, and at this point in a lost season it’s really easy for veteran players to get frustrated. For someone like Pau Gasol, who has championship rings, plenty of competitive drive and not a lot of peak years left in his career, the last six weeks of a losing season can be hard to swallow. But Gasol has never been the kind of guy to act out or cry about a raw deal.

In fact, he’s taking this frustrating year in Los Angeles pretty gracefully, even after not getting traded to a better team at the deadline last week.

“Here I am. I’m still here. I’ve been in L.A. for six and half seasons and I’m going to see out my contract here. I’m happy,” Gasol wrote for his personal website’s blog (translation courtesy of HoopsHype.com).

“The trade deadline has passed. There’s good news and bad. The good news is I’m the master of my fate now. The bad news is it’s not for too long, until I sign my next contract, which is not really bad news, it’s just the way it is.”

Gasol doesn’t know what his future holds in L.A., but the way he talks it sounds like he’s interested in exploring his options as fully as possible when he hits free agency this summer.

“I’m a free agent with no restrictions,” he said. “That means I can go wherever I want. The Lakers don’t have any bargaining rights. My franchise has the chance of offering me more money and a longer contract, but that’s not all that’s going to matter as far as my decision.”

That doesn’t mean, however, that he wants out of L.A. In fact, he seems pretty open to a return.

“Honestly I’m not ruling out renewing my contract, I’m just open to every option,” Gasol said. “My decision will be based purely on sporting considerations. It couldn’t be any other way. I want to be in a team with a real chance of winning a ring and where I can help to compete for it. I would like to win another championship. The financial side comes second at this stage of my career.”

He may give up money to play in a winning situation next season, but for now he’s just trying to get through the rest of this season and prove he still has enough in the tank to contribute for a contender next year.

“From now until the end of the season I’ll focus on helping the team, as I always said,” Gasol said. “It’s a very delicate situation and I’ve just recovered from an injury, which came along at a very unfortunate time, like they always do. I know I always say this, but life’s like that. I always think of it this way: I try to do things the best way I can and I try to help my team to win. It’s simple. It’s real. I can’t lie, there’s a lot at stake in the next months. I want to keep playing at the highest level for many reasons.”

Gasol has had an incredible run in L.A., and with his stint there coming to an end soon, he appears to be as gracious and open-minded as he possibly could be at this point in his career. Older players, especially ones who have already won rings, can be like that. Whatever comes for Gasol next season, the Lakers have been lucky to have him on their side for so long. It’s just a pity that his last season with the team had to be so dismal.