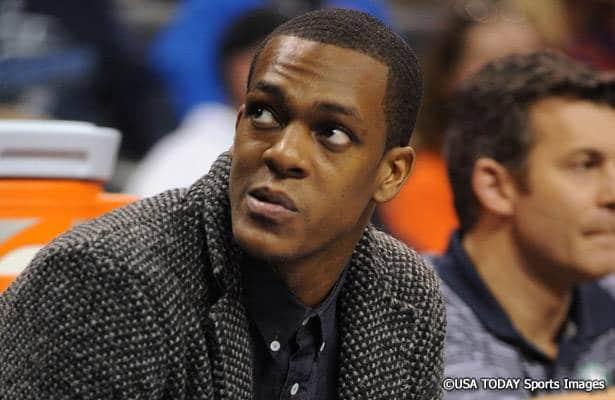 For the first time since tearing the ACL in his right knee last January, Rajon Rondo will take the floor for the Boston Celtics when they face off against their longest rivals, the Los Angeles Lakers, tonight.

Despite the advances in medical technology, a torn ACL is still one of the most serious injuries a basketball player can suffer. Many have never been the same. Chicago Bulls point guard Derrick Rose only showed periodic flashes of his former self in his return from an ACL injury before suffering a different knee injury that is costing him the rest of this season. Minnesota Timberwolves lead guard Ricky Rubio shows little side effects from his torn ACL, but that’s a testament to just how differently everyone recovers and handles the operation.

Rondo didn’t have the benefit of a preseason to help get him acclimated for the regular season, nor did he end up getting a couple of warm up games under his belt in the NBA’s Development League like he was rumored to for a short period. He’s jumping right into the thick of things tonight, although his minutes are going to be limited, according to Celtics head coach Brad Stevens.

It’s going to be a different feel for Rondo when he gets out there, not just because he’s playing on his surgically repaired knee in an official game for the first time, but because the Celtics have undergone wholesale changes since his injury. When he originally got hurt, Kevin Garnett and Paul Pierce were still the faces of the franchise and Doc Rivers was still the head coach. There had been talk for years that a breakup could be pending at any moment, but it finally happened this summer with Garnett and Pierce going to the Brooklyn Nets while Rivers replaced Vinny Del Negro as the head coach of the Los Angeles Clippers.

Rondo was a good player before Garnett and Pierce got there, but alongside them he quickly exploded into one of the league’s premier point guards. He was piling up assists in a fashion that only the all-time great point guards from the past have, but the foundation and system that he became a star under are now long gone.

In is a first-year head coach in Brad Stevens, who to his credit had exceeded most people’s expectations with the job that he has done so far before the team went on their current 1-9 skid. But, as most head coaches who have failed at the NBA level will tell you, the most difficult part of the job is coaching stars. Prior to tonight, Stevens was coaching a young, hungry group without any certified stars. It was a group open to being coached. That’s not to say that Rondo won’t be receptive to Coach Stevens and what he wants from him, but Rondo has the track record and accolades to justify being set in his own ways. Stevens is going to have to adjust to him more than any other player so far.

Rondo is returning to the Celtics at a time when they need him more than ever. At 14-26, the season is still very salvageable, especially considering that they’re only three games out of the playoffs, but it’s going to take All-Star type production from him to make it happen. Will he be able to get back to that level this season, especially in a new system without the same caliber of talent around him that he grew accustomed to over the last few years? That’s a question that will only be answered in the coming weeks.

With just over a month until the NBA trade deadline, the Celtics will undoubtedly be fielding trade offers for Rondo, especially if he plays anything like he was prior to the injury. They’ve maintained that he’s the face of their franchise now and that he’s a part of their long-term plans, but that can easily change over the course of the next four weeks. If there’s anything Celtics president of basketball operations Danny Ainge has proven over the past year, it’s that he’s doing his job with the long-term future of the franchise in his best interest, not loyalty to the players who helped the franchise become contenders again. He’s focused on building the next contending team above all.

Injury Update: While Rajon Rondo is making his return to the court tonight, news broke earlier today that a couple of other players around the league will be off of it due to injuries of their own.