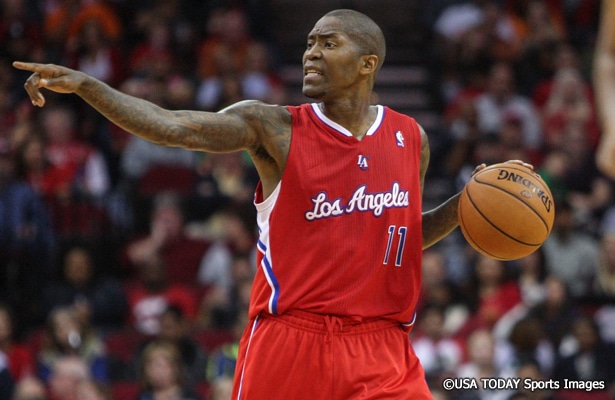 Los Angeles Clippers guard Jamal Crawford is 33 years old and this is his 14th season in the NBA, yet somehow he continues to improve from year to year. While other veterans show signs of decline, Crawford continues to strike fear in the opposition with his humiliating crossovers and jaw-dropping scoring ability.

“It’s weird, but I feel like I’m still getting better,” Crawford told Basketball Insiders with a laugh. “Now that I’m 14 years in, some people have been like, ‘Why are you still playing?’ A lot of guys start to plateau at that point or start to [decline], but I feel like I’m still getting better. I love the game of basketball. I’m entrenched in it every single day whether I’m playing it or watching it or talking basketball. For me, it’s still fun. It’s fun to work and see yourself get better. For me, I feel like I can do this for a very long time; God willing, no major injuries.”

This season, Crawford is putting up numbers on par with the best seasons of his career. He’s averaging 18.6 points, 3.3 assists and one steal, as well as the second-highest efficiency rating of his career (17.8). His 29.2 points per 48 minutes rank 12th in the NBA and second among shooting guards (behind only Houston’s James Harden). Crawford is also one of the top clutch players in the league, averaging the third-most points per fourth quarter (6.7 points).

Crawford also has a number of signature performances under his belt this season. He had 31 points, 11 assists and seven rebounds off of the bench in a win over the Sacramento Kings in late November. He also had 37 points and 11 assists off of the bench in a win over the Toronto Raptors in late January. No other bench player in NBA history has recorded 31 points and 11 assists in a game, yet Crawford did it twice in a two-month span. Crawford is the favorite to win this season’s Sixth Man of the Year award, which would be his second Sixth Man trophy after winning it in 2010 as a member of the Atlanta. However, he’s focused on a bigger goal: winning a championship.

“It would be a wonderful honor,” Crawford said of winning the Sixth Man of the Year award. “Whenever you can get an award, I think it means that your team is successful and you’re having a pretty good season with that. I’m not against it by any means at all, but I’m not playing for it. I’m just playing to win. I’m having fun playing basketball and learning more about the game from my coaches and teammates. It’s still fun for me, especially to see improvement and to see how I can get better. I’m playing to win, and that’s the only thing that really matters to me. Everything else that comes with it, I’ll take it in stride. It would be a total team accomplishment. No matter what awards you win in the season, all that matters is winning the championship.”

Crawford and the Clippers believe that they have what it takes to hoist the Larry O’Brien trophy this season. L.A. is currently 37-18, which is good for the fourth seed in the Western Conference.

“We feel like when we’re really playing our best, we can play with anybody in the league,” Crawford said. “Not to make a cocky statement or anything, we just like our chances. Of course, we have room for growth down the stretch here. We have to get guys healthy and we have to continue to build our trust on both sides of the ball every single night – that’s what we’re working towards. But I like our chances, I really do. I feel like the West is a dog fight every single night so that kind of helps keep you on your toes. The injuries we had were unfortunate, but they caused us to come together and become more of a close-knit group, so that was one blessing. We’re just going to keep growing every single day and then go from there.”

The team continued to play well even after Chris Paul went down with a shoulder injury on Jan. 3. Crawford believes the injuries to key players like Paul and J.J. Redick will help the Clippers in the long run since other players had to step up and it forced the Clippers to battle through adversity under head coach Doc Rivers.

“I think it was a blessing in disguise because, while you never want to lose anyone to injury especially someone of Chris’ magnitude or J.J. earlier in the season, those guys got a chance to watch us grow,” Crawford said. “We had no choice but to grow without them. Doc said he’s lost guys like that before, losing [Paul] Pierce for games here and there and losing KG [Kevin Garnett] here and there, but he said, ‘We’re going to be a no excuse team.’ No matter who’s out there, those are the guys who we’re going to go to war with. We tried to do that and hold down the fort. Blake was more of a vocal leader and was able to grow. And Chris, watching from afar, was able to see the growth of some of us and how we can help him so he doesn’t have to make every single play. He is the best point guard in the league, but still, if we can lighten the load off of him a little bit and everybody steps up a little bit more, I think our team will be better because of it.”

Crawford has been extremely impressed with Coach Rivers and his staff, and he credits them for his success this year.

“He’s been unbelievable,” Crawford said of Rivers. “Watching him all of those years in Boston and even back in Orlando, I knew he was good, but you don’t know how good he is until you’re around him every single day. That’s what we’re experiencing with him now and he’s unbelievable. … I worked really hard over the summer to improve, but I think a lot of it is that Doc has put me and my teammates in positions to be successful. I think I’m a much better player thanks to him and his staff, and a more well-rounded player as far as rebounding, defending, making plays and scoring; I think I’m the best player that I’ve ever been and there’s a direct correlation between that and the arrival of Doc and his staff.”

The development of Blake Griffin and DeAndre Jordan has also been a huge factor in the Clippers’ success this season. Crawford has been blown away with how much they have improved.

“It’s been unbelievable,” Crawford said of Griffin’s development. “If you just watch Blake from a distance, I guess you may say it’s just all about dunks and highlights, but people don’t see how he understands all of the intricacies of the game, the subtle passes, the screens, the charges he takes, the 15-foot jump shots, the 17-foot jump shots, everything he does for our team. It’s just been unbelievable. He’s such a hard worker, and to see how good he’s gotten in such a short amount of time, it’s been fun to watch and be a part of. The second Chris went down, we kind of looked at each other like, ‘Okay, we’re going to have to carry the load.’ Everybody else has definitely stepped up and played their part. We win as a team and lose as a team. But Blake, DeAndre [Jordan] and I definitely felt that we had to take on more of a leadership role.”

Without missing a beat, Crawford proceeded to praise Jordan’s development as well.

“He should have been an All-Star this year, there’s no question about it,” Crawford said of Jordan. “He should have been an All-Star. He gets 15 to 20 rebounds on any given night. He’s always covering our backs on defense. He does so much for this team. I told him yesterday, every time he even rolls hard, he opens up the floor for our shooters. He spaces the court so well because everybody is scared of how he rolls because they’re thinking about the possibility of getting dunked on. He’s been an All-Star-level player this year and hopefully he’ll win Most Improved Player or be right there at the end.”

Crawford and the Clippers have been impressive this season and they have as good a shot as any team to come out of the loaded Western Conference.

Former Orlando Magic head coach and NBA analyst Stan Van Gundy doesn’t believe that Utah Jazz forward Gordon Hayward is a max-contract player. He made that clear in a recent interview with 1280 AM in Utah.

“There are a lot of people out there that seemed to think this guy was going to go for near max money,” Van Gundy said, according to The Salt Lake Tribune. “I don’t see that, myself. I think he’s a very good player, very athletic, can do a lot of things. But I think the way the game is going, a perimeter guy who is not a good shooter, not a real good shooter, I think that limits his value in today’s game.”

Van Gundy said that he believes he’s worth “a little bit above the mid-level exception,” or about $6.5 million to $7 million.

“But from what I’ve heard, he’s going to get a lot more than that interest-wise,” he added.

For what it’s worth, Hayward says he isn’t thinking about the contract since it’s out of his control. He’s just focused on playing the best basketball that he can.

“I don’t really think about it directly, about the contract,” Hayward said. “I think about going out there and trying to prove my value in the league.”

“We’re trying to get better as individuals, as a team,” he added. “For a lot of us, it’s a contract year. Guys are not only playing for us, but because it’s a business, they’re playing for everybody else.”

This season, Hayward is averaging 16 points, five rebounds and five assists a game while shooting 40 percent from the floor.