Which free agent acquisitions flew under the radar? Basketball Insiders’ experts discuss the most underrated additions of this offseason.

Myles Turner is stopped almost daily as he walks around Indianapolis. When you’re the No. 11 pick in the NBA draft (and 6’11 with a unique haircut), that’s bound to happen. Fans spot him and ask for a picture or autograph, or just to wish him good luck in the upcoming season. The 19-year-old enjoys these interactions, and his first impression of his new home has been overwhelmingly positive.

“It’s really a lot like Austin, my college town,” Turner told Basketball Insiders. “There’s kind of a lively, good vibe to it. More than anything, the people love their sports down here, man. They love their Indianapolis Colts and you know they love their basketball down here. That’s one thing I noticed right away. I mean, anywhere I went, people knew who I was and told me they are looking forward to the season. I like that everybody knows what’s going on.”

But even with these frequent encounters and the intense workouts he’s doing each day at the Pacers’ practice facility, Turner says it hasn’t sunk in that he’s an NBA player and that many people view him as a “celebrity.” Remember, he’s still only 19 years old, just two years removed from high school, so this has all been a whirlwind for the big man.

To understand just how far Turner has come, consider that three years ago, he wasn’t even on college basketball’s radar, much less the NBA’s. Just before his junior year of high school, he broke his ankle and at that point he was still relatively small, so he wasn’t even ranked among the top 100 high school players in the country. However, a six-inch growth spurt that year and an evolving game allowed him to deliver some monster AAU performances and a dominant senior season. Suddenly, he was the No. 2 ranked recruit in the nation.

Cody Toppert, the Director of Basketball Development at ELEV8 Institute, worked with Turner right before his incredible ascent to stardom and for several years after.

“It was amazing watching him blossom and just kind of blow up on the AAU circuit, and then go to the Nike Skills Academy and solidify himself as a top recruit,” Toppert said. “To me, it was the culmination of all the work that he put in behind the scenes and I think that’s really the biggest thing that Indiana can be pleased with. They haven’t just added an athlete with attributes that will lead to potential victories, they recruited a human-being who could be a leader in the locker room down the road, a human-being who’s going to learn from the veterans, a human-being who’s going to go the extra mile, do the extra work and really buy into whatever role he’s given early and then continue to expand that role. To me, that’s really what Myles is all about.”

Turner is one of the most intriguing big men to enter the NBA in quite some time because of his well-rounded game. Like other players who had their growth spurt so late (with Anthony Davis being the most notable example), Turner is extremely skilled and versatile. He can knock down jump-shots from the perimeter to space the floor and has terrific ball-handling skills that shocked Toppert during their early workout sessions. He has these weapons in his arsenal because, prior to his growth spurt, he often played on the perimeter and he modeled his game after swingmen like Kevin Durant and Lamar Odom.

However, once he did grow into a 6’11 physical specimen, he became an elite rim protector and solid rebounder while retaining his offensive skill set. Now, he’s a big man who will swat your shot on one end of the court and then pull up for a jumper on the other end. 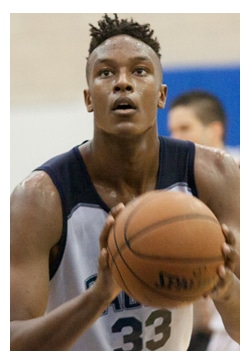 These days, NBA teams want big men who can either space the floor with their shot or defend the paint as a shot-blocker. The fact that Turner does both of those things very well makes him a prototypical big man in today’s NBA.

He showcased his two-way game during the Orlando Summer League, when he averaged 18.7 points (shooting 60.5 percent from the field) while also contributing 8.3 rebounds and a remarkable 4.3 blocks. Not bad for a teenager who was putting on an NBA jersey for the first time.

“I think the game is definitely evolving; versatility is a big part of my game and what NBA teams are [looking for],” Turner said. “It’s very hard to guard a versatile big man that can do a lot and that’s definitely what I base my game on and what I’m trying to do.”

“If he reaches his full potential, he could be one of the best big men in the league – no question about it,” Toppert said. “When I started working with him, and I distinctly remember this, I told him he could transcend his position. That’s something we talked about: ‘Transcend your position. Don’t just be a typical back-to-the-basket five, a slow type of player. Transcend your position by having the face-up skills, spacing the floor, being well-rounded.’ He has a great motor about him, blocking shots and getting rebounds in his area. Those things combined with his skill set, it’s clear he can be special. The league values big men like Myles. He has a unique combination of skills, versatility, size and the right kind of personality. Those are ingredients as far as putting together a recipe for success.”

Turner is doing everything he can to maximize that full potential and live up to these high expectations. During the pre-draft process, he worked extremely hard with elite trainer Joe Abunassar at Impact Basketball in Las Vegas. This hard work translated into success in his team workouts, which helped his draft stock.

Now, he’s training at the Pacers’ facility and putting in equally rigorous workouts. He gets up early every morning, eats some turkey sausage and eggs (“trying to stay on the lean meat and get some protein”), and then heads to the facility for workout sessions on the court (with a focus on post moves and his inside game) and in the weight room. But his day isn’t done, because he typically heads back to the gym later in the afternoon to put up shots. Turner’s work ethic has been praised, but he laughs at this because this doesn’t feel like work to him.

“It’s like a dream,” Turner said. “I mean, you’re getting paid to do the greatest job in the world! There’s nothing like it, so it’s a great feeling to really just be able to chill all day. Yes, I’m working, but it feels like chilling all day when you love what you’re doing. I’m very fortunate to be in this position that I am.”

Turner has been training alongside fellow rookies Joe Young and Rakeem Christmas, as well as sophomore Glenn Robinson III.

“Paul George he just got out here and we have been working out and hanging out with him a lot – just fishing with him and just chilling,” Turner said. “It’s really nice to have that. I mean, you want to be able to have a good veteran [to help you] and I think Paul George is a great veteran. He’s very focused this season coming off of that leg injury, so he’s going to be right back [to normal].”

It’s very possible that Turner opens the 2015-16 season as the Pacers’ starting center. With the departures of Roy Hibbert and David West, Indiana’s frontcourt is in need of some help. That’s where Turner may be able to step in right away and contribute. Turner is clear that he hasn’t landed the starting job yet – he’s competing with veterans like Jordan Hill (unless he plays power forward) and Ian Mahinmi – but it is something he’s hoping to earn.

“The chance to be a starter right away, that’s one thing I’m working for because it’s something that’s not going to be handed to me,” Turner said. “But it’s definitely an honor getting a good chance to kind of establish myself.

“[My rookie goals include] making sure that I have established myself and get some good playing time; I don’t have to have all the minutes, but I want to make sure I have an established role with this team and get out there and give myself a chance to prove myself. Also, of course, I want to make the playoffs. I guess the Eastern Conference kind of gets a bad rep sometimes as far as competition, so I want to make sure we are one of the top teams.”

What about winning Rookie of the Year?

Turner has been getting some Rookie of the Year buzz after everyone saw how dominant he was during Summer League. People see those monster numbers and the fact that he may be a day-one starter and wonder if winning that award is possibly in his future. However, Turner knows that Summer League doesn’t mean anything once the season starts and that he’ll have to prove himself once again.

“Yeah [Summer League helped my confidence] and it was good to get those first jitters out,” Turner said. “That’s what I thought Summer League was great for, really. You get that first little pro experience and my confidence started to rise as I was playing. I feel like I did well for myself, but more than anything though I just wanted to get those jitters out since it was my first little stint of being a pro.

He still has a lot to prove and understands that Indiana’s veterans will carry the team during his first season. He says he believes the Pacers have what it takes to contend in the East, and adds that the team could have multiple All-Stars in George and the recently signed Monta Ellis.

Speaking of which, an All-Star nod is another one of Turner’s goals, but obviously not until later in his career once he’s closer to his prime.

“Being an All-Star, that’s the ultimate goal and something I’m working for,” Turner said. “It’s sort of a long-term goal at this point. I want to focus on my short-term goals and learn from them right now, but yeah, that’s definitely something I want to do.”

Turner is certainly a young player to keep an eye on in the years to come, as he seemingly has all of the attributes to thrive in the NBA. Right now, he’s not getting as much attention as some other lottery picks like Minnesota’s Karl-Anthony Towns, Los Angeles’ D’Angelo Russell or Philadelphia’s Jahlil Okafor, but that’s fine with him. He’s no stranger to becoming a star out of nowhere.

In case you missed it over the weekend, former Duke point guard Quinn Cook joined me on the podcast to discuss his college experience, the impact Coach K has had on his life, what it was like attending Oak Hill Academy, the incoming NBA rookie class, his friendship with Kevin Durant and much more. Listen here: