The Life of an NBA Trainer

On July 4, 2007, Dan Barto went on a life-changing trip. He was heading to Las Vegas for six days to train five of the top 11 picks in that year’s NBA draft. He would be working under Joe Abunassar of Impact Basketball and Barto would help work out Yi Jianlian, Corey Brewer, Joakim Noah, Acie Law and Spencer Hawes – preparing them for pre-draft workouts, tweaking aspects of their game and ensuring that they were in the best shape of their lives. He even got to spend two days working with Kevin Durant, although his time with the future superstar was limited.

Barto was thrilled about the opportunity. Few people can say they’ve trained a handful of lottery picks. Perhaps most impressive about Barto’s opportunity is that it came very early in his career. Two years earlier, Barto was working as a bartender and coaching a girls’ middle school basketball team in Pittsburgh.

He had come a long way; all of his hard work had paid off and he was finally living his dream. Even looking back on his career today, he says this was one of the best groups of prospects he’s ever trained. The week went extremely well and Barto returned home on cloud nine. He would continue working with Abunassar and Impact Basketball, and it seemed everything was finally going right for him. He couldn’t wait to tell his roommate everything that happened and further break down each player’s game.

However, the moment he walked up to his Florida condo, he knew something was wrong. A lockbox was on the door. His key didn’t work. His roommate’s phone was disconnected. The best week of his life quickly turned to one of the worst, as the condo had been foreclosed.

Chasing his dream had caught up with him. He struggled to pay his mortgage since he was constantly traveling to Las Vegas and Los Angeles to train players. When he rented a room in the condo, he put down three months of rent and now that was gone too. Desperate, strapped for cash and technically homeless, Barto made his way to a nearby Holiday Inn. Shortly after, he found an apartment on the border of Compton. But he was still almost entirely out of money, so he says he spent much of the next two years saving money by living off of EAS shakes and bars.

“By day, I was the man; I was training some of the best athletes in the world,” Barto told Basketball Insiders. “But by night, I was broken. I was depressed, out of money and praying for a solution. I was too proud to ask for help, and I was too obsessed with my work to slow down and balance my life.”

He worked with NBA players and big-time agents, all of whom had no idea what he was going through. They would invite him to swanky restaurants in Malibu and Laguna Beach, but he always turned them down. If they insisted, he prayed they’d pick up the check.

While Barto loved his time with Abunassar and Impact Basketball, he realized he was in over his head and took two years off from working with NBA players. He says that “giving my notice to Joe was one of the hardest things I ever had to do,” but he felt it was necessary.

Today, Barto is no longer in a dark place and has come a long way in his career. 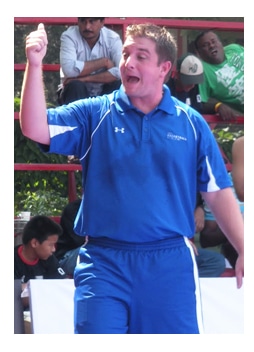 He is now the Head Skills Trainer at the famed IMG Academy in Bradenton, FL. He started as the head coach of IMG’s Post-Graduate Team, but worked his way up and now is in charge of training IMG’s NBA players. Fortunately, he no longer struggles from paycheck to paycheck or dreads those dinner invites from players and agents.

He still coaches various high-school-level teams at IMG, but his offseasons are spent with pros. Throughout his career, he has worked with over 100 current or former NBA players, barking at them in his raspy voice.

At IMG, Barto has worked extensively with a wide range of players, from veterans like Jimmy Butler, Iman Shumpert, Moe Harkless, Michael Beasley, Larry Sanders and Glen Davis to recent first-round picks like Cameron Payne, Rodney Hood, Shane Larkin and Kendall Marshall. He has played a role in the comeback stories of Hassan Whiteside and Shawne Williams. He has also worked with a number of overseas stars, such as Aaron Jackson and Alex Tyus.

Most NBA fans don’t know much about trainers, but they play a crucial behind-the-scenes role in the basketball world. Barto and the IMG team can help a prospect skyrocket up draft boards by preparing him for team workouts and tweaking aspects of his game (just ask Shumpert, who was projected to go undrafted or late-second round entering the pre-draft process but climbed all the way to the 17th pick in 2011). Barto can also help a player resurrect their career by fixing parts of their game and getting them in excellent shape so they can impress executives at free agent workouts.

Whenever you step into IMG’s basketball facility (which includes multiple gyms, a 10,000-square foot weight room, the Gatorade Sports Science Institute and more), you’ll see a mix of recently drafted prospects looking to make their mark in the NBA and veterans hoping to stay in the league. Barto’s goal every summer is to get players drafted, signed and prepared for the upcoming season.

But getting into the gym and putting a player through a workout is tougher than it sounds. If a trainer isn’t doing the job correctly, not only will the player fail to improve, all of that hard work they’re doing can actually be counterproductive and hurt their career.

“Science, periodization and methodology are so important,” Barto said. “I have watched trainer after trainer not be able to balance training load and actually hurt players or peak them in the summer only to have them burn out once the season starts. Over the last five years, we have used our system of Hybrid Analysis and Mode-Move-Finish methodology to develop and kick start the careers of many players.”

Also, the life of an NBA trainer may not be what you expect. While working with some of the best athletes in the world is thrilling, there are a lot of side jobs that come with being a head trainer.

“It’s not all fun and games,” Barto said. “Very few NBA players pay to train, and the retention of paying players is not great. This means most trainers must coach kids as well, which is great but very demanding and involves a lot of creativity. This is why I work with IMG’s prep teams. We’ve had over 150 Division I players go to IMG, as well as the first Indian-born NBA player Satnam Singh.”

Trainers also have to deal with all of the people in each player’s life. Barto must appease agents, family members, friends and others, otherwise he could lose a player. Sometimes, dealing with those around the player can be the most difficult part of the job.

“I’ve had an agent threaten me because a fan secretly video-taped his player in a workout and put it up on a website in China, where the player was very famous,” Barto said. “Another agent once called me repeatedly and left me 52 voicemails because their players looked bad in an open workout. There have also been times where I’ve had to work out the family members of players to keep them happy. I spent 30 hours training one player’s girlfriend last year.”

Barto tries to keep players out of trouble, but at times has to clean up their messes (sometimes literally).

“Cleaning out the off-campus apartments where the players can stay while training is the worst,” Barto said. “One time, a player had 200 empty Natural Light bottles assembled into a beer bottle pyramid during pre-draft training (when a player is supposed to be on their best behavior). I’ve found a gas mask with a six-foot hose attached. I once found a pet iguana that a player forgot about and left behind.

“Then, there was the time I had to go help the police settle a dispute with a player and a Craigslist ‘massage specialist,’ who thought the agreed price was higher. These are some of the crazy things you get to deal with when you aren’t on the court working with the players.”

Hearing Barto tell stories about his job, it’s clear that a trainer must wear many hats when working out a player. You aren’t just working them out. You may get random calls asking for completely unrelated things.

“One time, I had to help a player try to retrieve his debit card because he shoved it into a parking pass key reader,” Barto said. “One time, I took a player to Walmart and watched him spend $800 [on items for training] and then leave the next day never to return.

“One time, I was training a player while our campers were watching and they start yelling, ‘You just got traded!’ That’s how the player found out. I’ve almost gotten injured trying to break up fights between enormous players during pick-up games. There are plenty of strange, but entertaining, stories that come with this job.”

While it may seem like Barto goes above and beyond for his players, that’s because he considers them close friends and will do whatever he can to help them succeed – in their career and in life. Also, there’s nothing more rewarding than helping a player accomplish his life-long dream.

“The relationships with players and things I do for guys are why, I believe, I have trained so many players and people genuinely say good things about me,” Barto said. “The cutthroat trainers usually do not last.”

Barto has managed to last, even though he struggled early in his career. Each year the NBA Draft Combine in Chicago, you’ll hear players crediting Barto for elevating their game and preparing them for the pre-draft process. He has helped IMG Academy become a destination for NBA players and overseas stars. And while he may have to put up with some unusual things that aren’t part of his job description, he absolutely loves his job.

“When you’re doing skills training with pros, it’s a drug,” Barto said. “Hearing the words, ‘I never did a workout like that before,’ or, ‘Man, I wouldn’t be where I am without you,’ is the greatest high one can feel in this line of work.”