With three quarters finished Monday night in Toronto, the Raptors just needed to hold onto a nine-point lead over the final 12 minutes to knot a suddenly-intriguing series at two games apiece. They faced the prospect of a LeBron-led bench unit that’s been destroying teams all postseason, but they’d also spent the last seven quarters doing an admirable defensive job against even the most dangerous Cleveland attacks.

Within under two minutes, the lead was gone. The Cavaliers scored on 14 consecutive possessions at one point in the half, and were it not for a heroic offensive performance of their own from stars Kyle Lowry and DeMar DeRozan during this same stretch, the Raptors would have been run out of their own building. As it was, Toronto escaped the onslaught with a tie and went on to control crunch time and come out victorious for perhaps the biggest win in franchise history.

One particular play set, known as Horns Rub (a name applied by Gibson Piper – purveyor of the HalfCourtHoops Twitter account and thebasketballplaybook.com, and generous supplier of all video for this piece), was nearly the Raptors’ downfall. Cleveland ran multiple variations of this same set repeatedly during this stretch, finding pristine looks over and over from the same simple base action. Only when Toronto got a herculean effort from Lowry were they able to snap out of their defensive lull and pull away. Let’s break down how it all happened in real time.

First, the basic set. We’ll slow it down so everyone can keep up, and see if you can spot each of the following simple actions: Matthew Dellavedova (or Kyrie Irving after a sub) enters the ball to LeBron James at the right elbow, and then runs toward Richard Jefferson standing at the left elbow. Dellavedova then sets a back screen on Jefferson’s man before popping back up to the top of the key to curl around James, and if this action doesn’t open anything up, Delly takes the ball from James on a hand-off and begins an immediate pick-and-roll with LeBron as the screener. As Dellavedova and James roll to the hoop, Channing Frye, noted three-point specialist, hangs out in the left corner – if Toronto crashes down too hard to help on the threat of James dunking at the hoop, Frye gets an open look. That’s exactly what happened the first time Cleveland ran the set:

From there, the way the Cavs manipulated the Raptors’ reactions to this first set’s success was a master class in elite tactical basketball. They went into the same alignment on the very next trip down the floor, but this time, watch what happened when Lowry and DeRozan fumbled the Dellavedova-Jefferson off-ball action (we’re using Gibson’s single compilation from here, so just watch one play at a time based on the time stamp):

DeRozan gets held up on Delly’s pick, leaving James too long a window to find Jefferson under the hoop. When Bismack Biyombo (perhaps hastily) rushes in to help DeRozan at the rim, the ball is back out to Frye and it’s another wide open three. 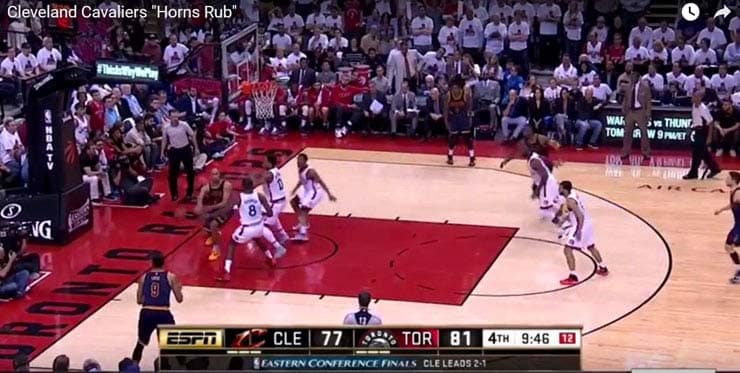 The Raptors closed that lane off the next time down, but were too spooked by Frye’s three consecutive makes from deep – and it hurt them. Biyombo stuck with Frye the whole way, leaving the Dellavedova-James pick-and-roll free to operate two-on-two, and James got the easiest points possible:

The Cavaliers took a break from Horns Rub on the following trip, instead leaving it to James to drive past Patrick Patterson in semi-transition for another layup, but were right back at it the next time down the floor. The Raptors actually did a pretty darn good job defending this one, but were doomed by personnel on the floor along with LeBron’s otherworldly passing ability. Keep an eye on the Delly-Jefferson off-ball switch again, and note how Cory Joseph (in for Lowry) is forced to switch onto the taller Jefferson as he releases to the rim – James notices, and simply lobs it up for an easy two:

The Raptors played their best defense yet against the set on the next trip, but still got burned – there was nothing they could do about Dellavedova making an off-balance leaner with a hand in his face. This was the last time the Cavs ran the action for a couple minutes after Irving entered the game, but with just under five minutes to go they broke it out again, this time with Irving in Dellavedova’s place as the entry passer and off-ball screener. Patterson completely bungled the Irving-Jefferson switch, and Richard got yet another dunk:

This could have set up another string of similar plays the Raptors were clueless against, but in came Lowry to the rescue. The Cavs set up the same way yet again on their next possession, but Lowry blew the original set up multiple times. Watch the play at full speed and see if you can spot them:

The Raptors handled the Irving-Jefferson off-ball action well, with Lowry directly trailing Irving as he headed over to take the hand-off from James. But Lowry turned on the jets here, beating Irving to the spot and forcing him to abort the curl and instead try a back cut.

Lowry did a great job speeding back to cover Irving’s back cut, forcing James to toss it cross-court to Frye, who tried to re-initiate the hand-off pick-and-roll with Irving on the opposite side of the floor. Biyombo switched onto Irving, though, negating that action, and here came Lowry’s second great play: bolting back to Frye in time to cut off one of the quickest shooting motions in the league and force a tough miss: 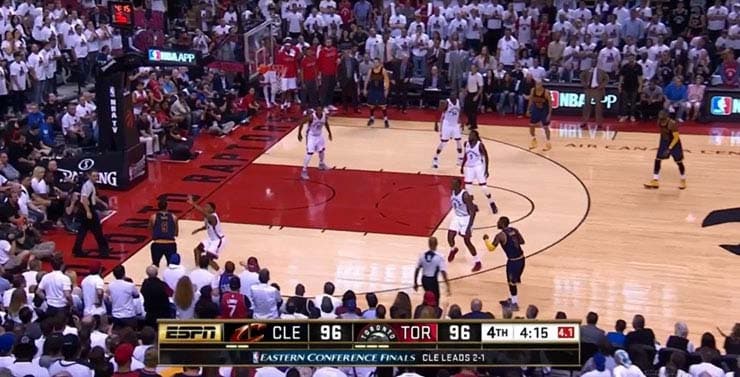 And with that, the storm ended. The Cavs wouldn’t run the Horns Rub set again in the game, and Jefferson’s dunk out of it with 4:53 on the clock proved to be their second-to-last basket – they’d score just three more points on the night. Cleveland coach Ty Lue likely made a mistake going away from the play after one failure given its earlier success, particularly in favor of the stagnant, mismatch-obsessed offense the Cavs mostly ran instead to close the game out.

At the same time, though, credit to Lowry for stepping up in a big moment – and not in the way many expect from him. His aggression threw off Cleveland’s tempo, and helped steer them away from a play the Raptors wanted nothing more to do with. Lowry’s own performance on the other end, along with DeRozan, sealed a huge win.

Watch for this set in Game 5, likely with regularity. The Cavs with James at the helm are among the smartest teams in the league, and will introduce new wrinkles and personnel to continue keeping the Raptors on their toes if they don’t prove ready to snuff this out consistently.