Last summer, Thomas Robinson was an unrestricted free agent for the first time in his career. Prior to July, the last time Robinson was able to select his team was back when he was a high school star weighing his college options and ultimately decided to join the Kansas Jayhawks.

Now, after playing for four different teams in his first three NBA seasons, the 24-year-old was excited to have some control over his fate and make a decision that was best for his career.

Robinson, who was the fifth overall selection in the 2011 NBA Draft, had already suited up for the Houston Rockets, Sacramento Kings, Portland Trail Blazers and Philadelphia 76ers. It was a whirlwind start to the big man’s career and he just wanted to find a landing spot where he’d be valued, given some security and have an opportunity to play.

Entering free agency, Robinson had just wrapped up a strong conclusion to the 2014-15 campaign with the 76ers in which he averaged 8.8 points and 7.7 rebounds in just 18.5 minutes per game. Because he played well when given significant minutes, a number of teams expressed interest in Robinson once free agency began on July 1. 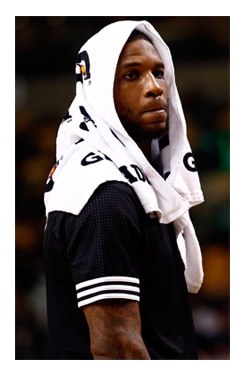 One of the first teams to call the big man was the Brooklyn Nets, who felt he could add rebounding and energy to their frontcourt. Right away, Robinson was intrigued by Brooklyn. Keep in mind, he nearly signed with the Nets in February when the Blazers waived him. In fact, Robinson was flying to join Brooklyn when he got the news that the 76ers had surprisingly claimed him off of waivers. While the stint in Philadelphia ended up working out, Robinson was now free to the join the Nets and nothing could stand in his way.

Several other teams reached out as well, but Robinson liked the idea of joining Brooklyn and gambling on himself. With the Nets, he felt he’d have an opportunity to earn significant minutes, setting himself up nicely to produce at a high level and potentially enter free agency again next offseason.

Robinson ultimately decided to sign a two-year deal with Brooklyn at the league minimum (with a player option for the second year). He’ll earn $981,348 this season and can opt in to a $1,050,961 salary next year. That means, if all goes as planned, he’ll be on the market again next summer.

While Robinson had some multi-year offers that he was considering, he felt his best plan was having a strong season with the Nets, increasing his stock around the league and cashing in next summer when he’s once again unrestricted and the multi-year offers may be a bit more lucrative (especially with the salary cap set to skyrocket due to the NBA’s new television deal).

“It was tough to gamble on myself and turn down a longer contract, but the way I look it, I really have this year to prove myself,” Robinson told Basketball Insiders. “I have no doubt that once next summer comes, I’ll be back on my way and I’ll have made the right choice.”

So far, Robinson has played well in Brooklyn. During the preseason, he averaged nine points, 9.5 rebounds, two steals and 1.3 blocks in just 21.5 minutes.

In the regular season, he’s averaged 4.7 points, seven rebounds and one block in 15 minutes, while shooting 60 percent from the field. His best outing came against the Memphis Grizzlies on Saturday evening, when he contributed eight points (on 4-5 shooting from the field) and 12 rebounds in 15 minutes. Per-100-possessions, Robinson has averaged 15.8 points, 23.6 rebounds, 3.4 blocks and 2.3 steals.

While the season is still young and the sample sizes are incredibly small, advanced stats show the impact that Robinson has had early for Brooklyn (particularly on the glass).

Robinson is making the most of his limited minutes and hustling all over the floor, which is a role he’s perfectly content filling alongside Brooklyn’s other big men.

“I just want to defend and rebound and bring energy to the floor,” Robinson said. “We have a good frontcourt with Brook [Lopez] and Thad [Young] and myself. Both of those players are scoring veterans and I’m just playing gritty basketball, defending and bringing that extra effort. If I just bring that all season and keep playing at a high level, I think I’ll be fine and be able to help the team.

“Honestly, I really just want to do what I do best. I just want to get the chance to prove that the stuff that I do – the defense and hustle plays and all of that – that I’m one of the best at doing those things. That’s pretty much what it’s all about.”

A few weeks ago, Robinson made headlines when he told Tim Bontemps of the New York Post that he was “tired of the disrespect” he received early in his NBA career. When asked about that comment, Robinson opened up about his frustration.

“When I said I felt disrespected, it was about me not getting opportunities [in the past],” Robinson said. “But I’m never going to complain about that.”

Instead, he’s focused on the future and the things he can control. He knows there are people who say that he’ll never amount to anything in the NBA, but he’s looking forward to shutting up those doubters.

“For those people who don’t believe in me, I really don’t care what they think,” Robinson said. “When I’ve been able to play, the numbers have been there and that’s one thing that you can’t take away from me. I just want to continue to produce like that. Silencing those critics will be great. I can’t wait. I got a couple quotes for them when all of this is said and done (laughs).”

One thing that bouncing around from team to team taught Robinson is that the NBA is a business, first and foremost. Every player learns this eventually, but Robinson came to this realization very early in his career.

“Honestly, it just made me pay more attention to the business side of the NBA,” Robinson said of being involved in so many transactions throughout his first three seasons in the league. “After the deal with Sacramento and then after the situation with Houston, you realize that a lot of these situations are out of your control. I definitely learned a lot from that.”

Because Robinson has been in the spotlight since his outstanding collegiate career at Kansas and then as a top-five draft pick in 2011, sometimes people forget that he’s still just 24 years old. Big men often take longer to develop and reach their full potential in the league, so it’s far too early to write Robinson off or act like his most productive days are behind him.

“I definitely think some people forget how young I am,” Robinson said. “I feel like I still have 10-plus years left in me and I think my best is definitely yet to come. I haven’t even come close to playing my best basketball. But I do still think I can be productive right now if I’m getting the chance to play. I do want to produce now, while continuing to grow as a player.”

The Nets have gotten off to a slow start this season, dropping their first four games to the Chicago Bulls, San Antonio Spurs, Memphis Grizzlies and Milwaukee Bucks. That’s a tough slate to open the season, and Robinson thinks better days are ahead for the Nets. In fact, he still believes that Brooklyn could qualify for a playoff seed in the wide open Eastern Conference.

“We definitely think we can be a playoff team in the Eastern Conference, and once you get to the playoffs anything can happen from there,” Robinson said. “We just want to battle out the season, play our best basketball, then get to the playoffs and grind our way from there. I definitely think we have enough talent and veterans on this team to where we could put something together and have a good season.”

Robinson will contribute however he can to help the Nets reach that lofty goal – grabbing rebounds, making hustle plays and doing whatever the coaching staff asks of him. With an opportunity to play and unrestricted free agency once again looming after the season, Robinson is all-in on the 2015-16 campaign.