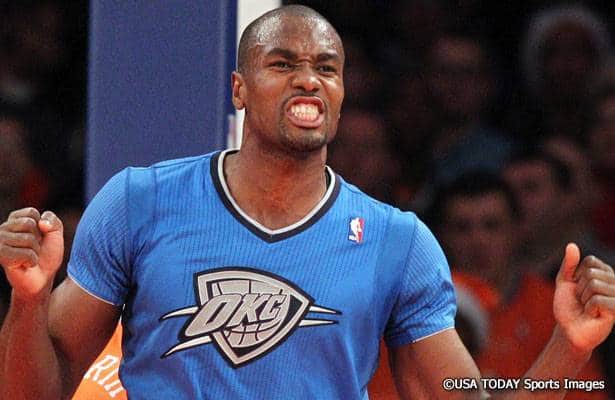 Carmelo Anthony stole the headlines across the league on Friday night when he poured in an NBA-wide, season-high 62 points, but Kevin Durant has been absolutely amazing over the past month, scoring over 46 points four times during January.

So, to the reigning Western Conference Player of the Week, Durant, we salute you. And as far as salutes go, we would would remiss to not extend the reverence to the Oklahoma City Thunder as a whole. Entering play on Monday, with a seven-game winning streak, the team has gotten meaningful contributions across the board and improbably regained control over the Western Conference’s number one seed.

With that, we quietly have begun wondering whether Serge Ibaka will make his first All-Star appearance this season as a result. With the reserves set to be announced on Thursday night, we have paid close attention to those that select members of the Basketball Insiders’ staff have picked to represent their conferences.

One such selection, Paul Millsap, has led an improbable rebellion down in Atlanta, and it is he that reigns as the Eastern Conference’s Player of the Week. Leading the Hawks to a 3-1 week, Millsap has impressively helped the Hawks defy expectations by staying afloat, even in the absence of Al Horford.

While the Phoenix Suns remain the gold standard for pleasant surprises this season, it is the Brooklyn Nets who are officially the NBA’s hottest team. After a tough loss on Monday night, the Nets are 10-2 in the month of January and are one or two wins away from giving Jason Kidd a great chance at being named the Coach of the Month for January. That is nothing short of amazing considering where the Nets were just a few short weeks ago.

Where they were on Sunday, though, was back in Boston. And for Kevin Garnett and especially Paul Pierce, it was a very special game. The reception they received was the highlight of the week.

As the clock ticks toward the NBA All-Star Break—and the announcement of the reserves pending—the trade winds continue to swirl, with chatter ramping up over the next few weeks. Pau Gasol, Greg Monroe, Kyle Lowry, Omer Asik and Ben Gordon—we’ll be watching you…