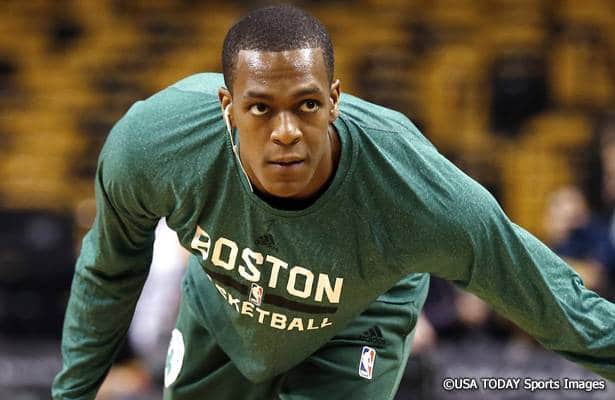 Rondo’s Minutes Will Be Limited in Return

“Listen, if [Rajon] Rondo comes back Friday — and I still haven’t been told yes or no — but if he comes back Friday, he’s only going to play 18 to 20 minutes,” said [Brad] Stevens. “And he’s coming back from playing for the first time in a year. For any of us to expect him to be in playoff form is not fair to him.”

Phil Pressey had 10 assists versus the Raptors in his first career start, but he’ll soon be Rondo’s backup. But even Stevens admitted that his team will get an emotional jolt from Rondo’s return to game action.

“I think his energy and his leadership will lift our team,” said Stevens. “But I don’t think we should put too much on his shoulders anyways, whether we won the last game or lost the last game [before his return].”

via Chris Forsberg of ESPNBoston.com

Rajon Rondo recently made headlines when he tweeted out “29,233,380 secs” – the time between his surgery and today. In other words, this was Rondo’s cryptic way of announcing that he was returning for Friday’s game against the Los Angeles Lakers.

While Celtics head coach Brad Stevens wouldn’t admit that Rondo was making his season debut tonight, he did temper expectations a bit by saying that Rondo’s minutes will be limited when he first starts playing again. This is common when a player is coming back from a serious injury like an ACL tear. There’s no reason for Boston to rush Rondo back, so expect Phil Pressey to continue to start.

The fact that Rondo is returning now is great for Boston because it gives the team plenty of time to evaluate and showcase Rondo before the Feb. 20 trade deadline. It’s no secret that the Celtics have a tough decision on their hands: keep Rondo and build around him going forward or trade Rondo for assets and continue the rebuild. They have a little over a month to decide.


Coach Mike Brown acknowledged Wednesday the team has discussed sending Bennett, the top overall pick in last summer’s draft, to the Development League, but thus far that move hasn’t been made.

“We talked a little bit about it, but we’ve talked about all of our rookies at one point in time going,” Brown said. “That’s going to be a call that [General Manager Chris Grant] has to make and he’s got to feel comfortable with. Right now there’s still an opportunity for him to possibly play some minutes. While he’s here in uniform, I’m not necessarily thinking about him going down there.”

Bennett has played sparingly most of the season and has vanished since the Cavs acquired Luol Deng, which forced Earl Clark back to his more natural power forward position and has shoved Bennett to the bench.

Anthony Bennett is having the worst season for a No. 1 pick ever, so it’s no surprise that the Cavaliers have talked about sending him down to the D-League. Bennett is currently averaging 2.4 points and 2.2 rebounds while shooting 26.9 percent from the field and 14.3 percent from three-point range. His efficiency rating is an awful 1.09.

However, when a player gets sent down to the D-League, it tends to stick with them. Just ask Hasheem Thabeet, who was ridiculed as being the highest drafted player sent to the D-League, and he was a No. 2 overall pick! Imagine how much criticism Bennett would get as the top pick playing in the D-League?

With that said, it could be good for Bennett, especially since his minutes have dwindled since the Luol Deng trade. It would give him a chance to play more, get his confidence up and further his development. Or, he would struggle in the D-League too and Chris Grant would cry himself to sleep at night.


“Ideally I want to play a few more years and particularly I would love to stay here,” [Caron] Butler said. “I expressed that to the Senator (Bucks owner Herb Kohl) and to management as well. This wasn’t supposed to be a visit. It was supposed to be a stay, a couple years and exit out the right way.

“And I feel that way in my heart. I mind the losing but I understand it’s a process. I know we will be a lot better next year. But we still can develop guys on the fly and get a lot better this year as well.”

via Charles F. Gardner of the Journal Sentinel

From the moment that Caron Butler got traded to the Milwaukee Bucks, he was ecstatic. Remember, Butler was born in Racine, Wisconsin. He even cried during his introductory press conference with the Bucks. Butler is serious when he says that he wants to end his career in Milwaukee.

While Butler has been vocal about wanting a bigger role, he understands that the Bucks are currently focused on developing their young players and giving them as many minutes as possible. If Butler doesn’t change his mind about retiring in Milwaukee, he’ll likely have to spend his final years in the league playing the veteran leader role on a young, losing team.

This is the final year of Butler’s contract and he’s being paid $8,000,000 this season. He can re-sign with the Bucks in July, or test the market as an unrestricted free agent.