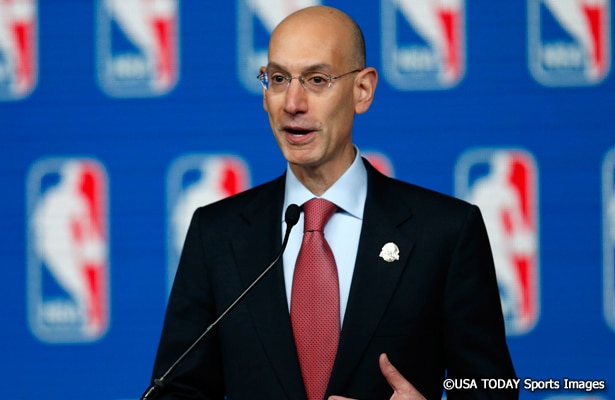 Check out our breakdown of the biggest rumors of the day. For more rumors and news, check out Basketball Insiders’ headlines, which are constantly being updated.

“I think we feel we have a responsibility at the NBA as the stewards of the game to ensure that the game is played the right way and those values of the game … are executed properly. We at the league office are thinking about those things every day. You have my commitment that I am focused on the game, and ultimately, that’s what this is about.”

Silver said the 20-year-old minimum age was “something we had on the table” in the last round of collective bargaining three years ago, “and when we compromised on a deal well into what should have been our season we agreed to ‘park’ certain issues and return to them, and age limit was one of them.”

“It’s my belief that if players have an opportunity to mature as players and as people for a longer amount of time before they come into the league, it will lead to a better league,” Silver said. “I know from a competitive standpoint, that’s something as I travel the league I increasingly hear from our coaches, especially, who feel that many of the top players in the league could use more time to develop as leaders as part of college programs.

As Silver mentioned, this was being seriously considered during the last lockout, but the two sides decided to focus on the most important issues and return to these secondary topics later since the work stoppage had interrupted the season.

The NBA believes that this will help players mature and develop before turning pro, while also decreasing the amount of busts in the league since this would give general managers two years to evaluate prospects before drafting them.

The players oppose this, just as they oppose the age limit altogether, because they feel that it should be an individual’s decision when they want to leave school and enter the NBA. Adding one more season to the time that a player has to spend in college increases the likelihood of a player getting hurt before turning professional, and it would shorten their NBA career by one year.

The collective bargaining agreement won’t be up for renegotiation for another three years, so it will be awhile before this is even discussed. However, it’s likely that this will become a key topic during the next CBA talks.

Jameer Nelson Wants to Stay in Orlando [Nelson is] only one of a handful of players in the game today—including Kobe Bryant, Dwyane Wade, Tim Duncan and Dirk Nowitzki—who has a good chance of remaining in the same jersey for the rest of his career.

For Nelson, that would only change if he asked for a trade, but he said he never has and never will. And he’s not planning to test the free-agent market after the season.

“I’ve never ever went to my agent and said I wanted a trade. I’ve never done that. And as far as I know, the management has never said, ‘We’re trading you,'” Nelson said. “I was always a guy who stayed loyal to them and they’ve stayed loyal to me. I want to stay in Orlando.”

via Jared Zwerling of Bleacher Report

Jameer Nelson’s name has been surfacing in trade rumors all season long, since he’s a 32-year-old veteran and Orlando is clearly in the midst of a youth movement. The belief is that the Magic would deal Nelson if it allowed them to get some sort of asset back in return, such as a talented young player or draft pick.

However, it’s important to note that Nelson and his family love Orlando, and he has made it clear that he isn’t trying to force his way out.

Keep in mind, when Nelson re-signed with the Magic in the summer of 2012, the team’s rebuilding effort had already begun so he knew what he was getting into when he inked that three-year deal. He is entrenched in the community and feels at home in Central Florida, and it seems he wouldn’t mind retiring with the Magic.

If he did get moved, Nelson would undoubtedly prefer to land on a winning team. At this stage in his career, he would love to be back on a playoff team and have the chance to compete for a championship, as he did earlier in his career when Orlando was one of the Eastern Conference’s best teams.

Several teams have called Milwaukee about point guard Luke Ridnour, including Washington and Sacramento, a league source said. The Bucks are also fielding calls about their young players, as teams are dubious that owner Herb Kohl is serious about going through the pain of a youth movement. (It’s been painful enough as it is.) But the message from the Bucks has been consistent: Barring a significant offer, their young assets are staying put.

via Ken Berger of CBS Sports

These two teams have been shopping for a reserve point guard in recent weeks, and they’ll continue to search until the trade deadline on Feb. 20.

Both of these teams were linked to Denver’s Andre Miller when the Nuggets were trying to find a home for their disgruntled floor general.

Don’t be surprised if one, or both, of these teams land a backup point guard in the days to come.

Their options could include Miller, Luke Ridnour, Beno Udrih, Jameer Nelson and Jarrett Jack (if Cleveland sells) among others.